A Voice for the Voiceless 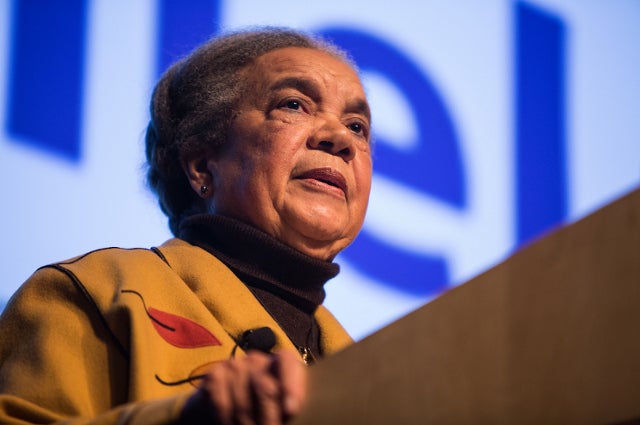 The day after Martin Luther King, Jr. was assassinated, Marian Wright Edelman went from school to school in Washington, D.C., warning students not to ruin their futures by joining the riots sweeping the city.

“A boy of 12 looked me straight in the eye and said, ‘Lady, what future? I ain’t got nothing to lose,’ ” said Edelman, who gave Tufts Hillel’s Merrin Moral Voices Lecture on the Medford/Somerville campus on Feb. 27. “I’ve spent the last 45 years trying to prove that boy wrong.”

A Yale Law School graduate, Edelman was the first black woman admitted to the Mississippi bar, and went on to direct the state office of the NAACP Legal Defense and Educational Fund. In 1973 she founded (and continues to direct) the nonprofit Children’s Defense Fund, which advocates for children, particularly poor children, children of color and those with disabilities. Tufts awarded her an honorary degree in 1989.

Looking back on the promise she made the day after King died in 1968—to ensure that every child has a future—she said, “I had no idea it would be so hard to do.”

Every 34 seconds, a baby is born in poverty, she said. Every nine seconds during the school day, a child drops out of school. Every 33 minutes, a child is killed or injured by a gun.

There are 14.5 million poor children in the United States, Edelman said, and 6.5 million of them live in extreme poverty. Out of 35 developed nations, the United States ranks 34th in addressing child poverty, just ahead of Romania.

“The test of the morality of a society is how it treats its children, and the United States has been flunking that test,” Edelman said.

As a result, many young people end up as “fodder for private incarceration systems,” she said. “These children are being sentenced to social and economic death.” This is not an accident or an act of God, it is a choice that can and must be changed, she said.

Citing a recent Urban Institute report commissioned by the Children’s Defense Fund, Edelman said if the federal government cut military spending and eliminated tax loopholes for corporations and tax breaks for the wealthy, and instead invested that $77.2 billion per year to expand subsidized housing and child care, increase food assistance, and provide transitional jobs, among other actions, the number of children living in poverty would drop by 60 percent.

Helping poor children and their families would, in turn, save the country hundreds of billions of dollars per year by disrupting the “cradle-to-prison pipeline,” Edelman said, and would set the country up for economic success by preparing a new generation of thinkers and leaders.

She urged the large Tufts audience to show up at meetings, call their legislators, and get out and vote, not just to advocate for change, but to protect existing early education and children’s health policies that are under threat.

“We’ve got to stand up and say to whoever is in power, to the White House and to Congress, that we will not go backward, they’re not going to tear down the already inadequate safety net,” Edelman said, to resounding applause. “If there was ever a time for moral voices to speak up in the political process for the voiceless, this is it.”

A Year of Anti-Racist Work at the School of Medicine