Is Cash Better Than Food Aid for Refugees? 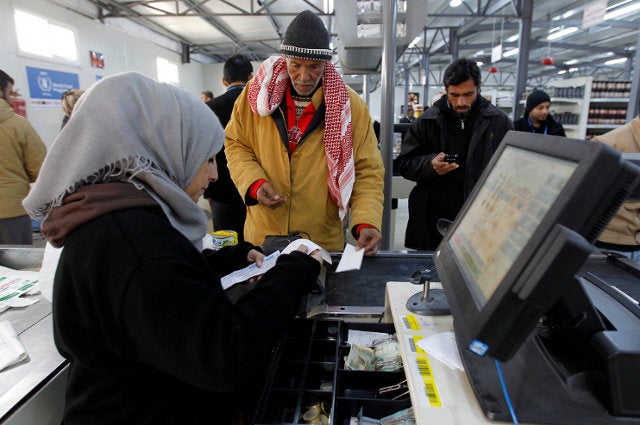 As the ongoing refugee and migrant crisis continues to dominate international news, it has given new urgency to an age-old question: What is the best way to get desperately needed food to people who have been forced to flee their homeland because of war, natural disaster or persecution?

The traditional method of providing aid has been either distributing sacks of flour or rice off the back of trucks, or handing out packages of oil, pasta, lentils and other foods to families residing in camps.

But the strategies for delivering food aid have not kept up with the times, according to Karen Jacobsen, Henry J. Leir Professor in Global Migration at the Fletcher School. Now Jacobsen, who directs the Refugees and Forced Migration Research Program at Tufts’ Feinstein International Center, is analyzing new methods for serving one of the world’s most vulnerable populations.

What is the point of relying on a strategy of distributing food to refugees living in camps, Jacobsen asked during a recent interview, when most refugees do not live in camps at all?

Of the 2.29 million Syrian refugees living in Turkey, for example, 90 percent live in residential communities, alongside people who are not refugees. For that reason, Jacobsen said, humanitarian organizations have begun turning away from shipping bags of commodities and instead are giving refugees the means to buy their own food—“especially in urban areas, and especially for Syrian refugees.” That often means vouchers that can be used at supermarkets or even cash wired directly to those in need.

It’s an approach that has won praise for its efficiency and its support of local markets. But the news isn’t all good, as Jacobsen and her team found when they evaluated one high-profile food voucher program from 2015.

As part of a $6.5 million program, the Danish Refugee Council (DRC) surveyed 9,100 Syrian refugee families living in southern Turkey to determine which were most in need of food aid. About 95 percent of the families reported coping with lack of food in some way—such as borrowing from neighbors or eating less so their kids could eat. From there, the DRC provided more than 32,000 of the refugees with e-vouchers that they could use at designated supermarkets.

The vouchers did help alleviate hunger. The refugees who received the benefits were less likely in follow-up interviews to report skipping meals or going a day without food. They said the e-vouchers reduced their worries, and even “conferred dignity and respect,” since they were able to go to the grocery store and choose their own food.

But the vouchers also caused friction. Everyone in the neighborhood knew who was receiving them, most likely because only a small number of supermarkets were involved. Some refugees reported that neighbors and extended family who did not receive the benefits were jealous, and that they felt pressured to share their benefits with them.

And because the DRC did not explain clearly enough why some people qualified for e-vouchers and others did not, some refugees perceived the qualification process to be unfair. They called a hotline to complain, started a Facebook page for grievances, protested outside the DRC offices and even threatened DRC staff on the street.

What lessons can be learned from the DRC e-voucher program? Jacobsen said that some of the problems could have been avoided by first asking the refugees what they thought would be a fair way to distribute the vouchers. Making the qualification metric clearer and more transparent might also have helped—basing it, for example, on the ratio of household members to money-earners.

But the biggest takeaway from the DRC program, Jacobsen said, is that the best way to help urban refugees may be by giving them not food, or even food vouchers, but cash. While many of the refugees said they worried about putting food on the table, they worried about other needs even more. “Much more of a concern is paying rent,” Jacobsen said, with health care, education and transportation also competing for their scarce funds. “In a camp you get these things for free, but in an urban setting you have to pay for them.”

Accordingly, cash transfers are being used more and more often by humanitarian groups. The World Food Program, for instance, said cash now accounts for just over a quarter of its assistance, a “conceptual shift” the organization made in the end of the last decade because of the flexibility, efficiency and choice that cash gives to beneficiaries.

Opponents of cash payments have argued that recipients could use the aid money for alcohol or cigarettes, or that the money could fall into the hands of terrorist organizations—a  concern that has left some aid agencies skittish about sending cash, lest they run afoul of government counterterrorism imperatives and lose their funding.

But those fears have proven to be largely unfounded, said Dan Maxwell, acting director of the Feinstein International Center. During the Somalia famine, for example, people used the vast majority of the cash they received to buy food or repay debts they incurred from buying food before assistance was available. “The overwhelming evidence is that money is used on things that people genuinely need,” Maxwell said.

Cash vs. Vouchers vs. Food Aid

And yet, while research demonstrates that e-vouchers and cash transfers can be superior approaches to providing assistance to refugees, there continues to be resistance to changing the system away from shipping in food. “For 50 years, the automatic response was to wind up the food aid machine,” said Maxwell, the Henry J. Leir Professor in Food Security at the Friedman School. Some of the inertia is attributable to the usual skepticism about new ideas, he said, but other factors are also at play.

The traditional method of food assistance started out as a solution to both human suffering and surplus U.S. grain production. “A whole industry grew up,” Maxwell said, “and that industry still lobbies on Capitol Hill to block or delay proposals for food aid reform.” Part of that lobby is aid agencies themselves, some of which feel threatened that their specialized roles as food purveyors will be made obsolete by upstart organizations doing cash transfers.

Of course, it is true that cash won’t work in every refugee situation. In places such as South Sudan, there may not be enough food in the markets for people to be able to buy their own. In other places, there is the danger that sending cash would cause inflation in the local economy. “A lot of the work that we’ve done over the past five years has been to say this isn’t just an automatic-response, one-size-fits-all question,” Maxwell said.

But for refugees living in urban areas, money transfers seem to be a good fit. Even then, though, there can be problems. “When people are living in refugee camps, you can easily say everybody here needs food, everybody needs tents,” Jacobsen said. “But most of the refugees settling in cities live among the urban poor. Their neighbors and hosts could be even poorer than they are. Targeting cash assistance at refugees can create a lot of antagonism with the host population. The government might ask, ‘Why are you giving this cash to these refugees, when our people are just as much in need of help?’”

Indeed, recent studies predict that rising social tensions between displaced people and their new neighbors have the potential to generate new conflicts, this time within the host countries. So humanitarian groups are looking at a new approach: providing aid to everyone in the areas where the refugees are settling.

Jacobsen said that areas with many refugees can be easily identified, and several of them are clearly in need. “In urban areas that have been heavily affected by a huge influx of refugees, especially in Jordan, Lebanon and Turkey, their systems—water, roads, housing—are all being burdened.”

The scope is not as financially overwhelming as it may sound. “You can target those areas that are being affected,” Jacobsen said. “Don’t just focus on the refugees, treat it as a whole area that needs to be supported.”

In the end, solving the problem of feeding millions of refugees may mean reimagining humanitarian aid as something more holistic, that addresses not just hunger but the many interconnected struggles that go along with urban poverty. It’s a new way of thinking, and one that Jacobsen, Maxwell and their colleagues will be pushing the sometimes entrenched humanitarian industry to explore.