Consuming foods rich in isoflavones, found in soy, is associated with reduced mortality in women with hormone-receptor-negative breast cancer and women not treated with endocrine therapy 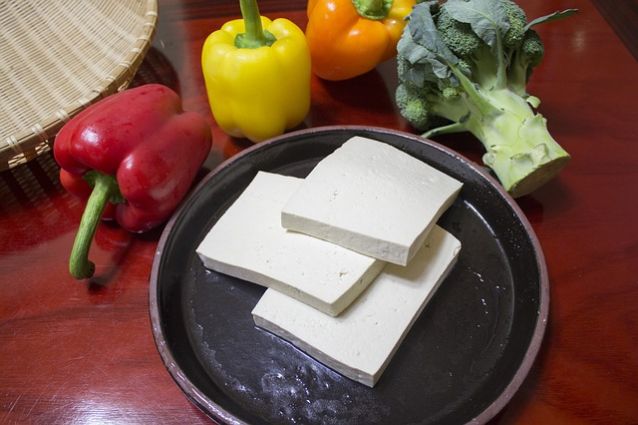 BOSTON (March 6, 2017)—An epidemiological analysis of data from more than 6,000 American and Canadian women with breast cancer finds that post-diagnosis consumption of foods containing isoflavones—estrogen-like compounds primarily found in soy food—is associated with a 21 percent decrease in all-cause mortality. This decrease was seen only in women with hormone-receptor-negative tumors, and in women who were not treated with endocrine therapy such as tamoxifen.

The study, led by nutrition and cancer epidemiologist Fang Fang Zhang, M.D., Ph.D., from the Friedman School of Nutrition Science and Policy at Tufts University, was published March 6 in Cancer.

“At the population level, we see an association between isoflavone consumption and reduced risk of death in certain groups of women with breast cancer. Our results suggest, in specific circumstances, there may be a potential benefit to eating more soy foods as part of an overall healthy diet and lifestyle,” said Zhang, who is also the 2016-2017 Miriam E. Nelson Tisch Faculty Fellow at the Jonathan M. Tisch College of Civic Life and an adjunct scientist in nutritional epidemiology at the Jean Mayer USDA Human Nutrition Research Center on Aging at Tufts.

“Since we only examined naturally occurring dietary isoflavone, we do not know the effect of isoflavone from supplements. We recommend that readers keep in mind that soy foods can potentially have an impact, but only as a component of an overall healthy diet,” she adds.

Isoflavones have been shown to slow the growth of breast cancer cells in laboratory studies, and epidemiological analyses in East Asian women with breast cancer found links between higher isoflavone intake and reduced mortality. However, other research has suggested that the estrogen-like effects of isoflavones may reduce the effectiveness of endocrine therapies used to treat breast cancer. Because of this double effect, it remains unknown whether isoflavone consumption should be encouraged or avoided by breast cancer patients.

In the current study, Zhang and her colleagues, including Esther John, Ph.D., senior cancer epidemiologist at the Cancer Prevention Institute of California, analyzed data on 6,235 American and Canadian breast cancer patients from the Breast Cancer Family Registry, a National Cancer Institute-funded program that has collected clinical and questionnaire data on enrolled participants and their families since 1995. Women were sorted into four quartile groups based on the amount of isoflavone they were estimated to have consumed, calculated from self-reported food frequency questionnaires. Mortality was examined after a median follow-up of 9.4 years.

The team found a 21 percent decrease in all-cause mortality among women in the highest quartile of intake, when compared to those in the lowest quartile. The association between isoflavone intake and reduced mortality was strongest in women with tumors that lacked estrogen and progesterone receptors. Women who did not receive endocrine therapy as a treatment for their breast cancer had a weaker, but still significant association. No associations were found for women with hormone-receptor-positive tumors and for women who received endocrine therapy.

While the study categorized women in the highest quartile as those who consumed 1.5 milligrams or more of isoflavone per day—equivalent to a few dried soybeans—the authors caution that individuals tend to underestimate their food intake when filling out questionnaires.

“The comparisons between high and low consumption in our study are valid, but our findings should not be interpreted as a prescription,” Zhang said. “However, based on our results, we do not see a detrimental effect of soy intake among women who were treated with endocrine therapy, which has been hypothesized to be a concern. Especially for women with hormone-receptor-negative breast cancer, soy food products may potentially have a beneficial effect and increase survival.”

The large size and diverse racial/ethnic makeup of the Breast Cancer Family Registry allowed the researchers to evaluate mortality risk across different subtypes of breast cancer and subgroups of patients, and adjust for confounding factors. However, the authors note that dietary isoflavone intake was correlated with socioeconomic and lifestyle factors, which may also play a role in lowering mortality. In particular, women who consumed higher levels of dietary isoflavone were more likely to be Asian Americans, young, physically active, more educated, not overweight, never smokers, and drink no alcohol. Although the team controlled for these factors in the analyses, the possibility of a partial confounding effect on the associations identified in the study cannot be ruled out.

“Whether lifestyle factors can improve survival after diagnosis is an important question for women diagnosed with hormone-receptor negative breast cancer, a more aggressive type of breast cancer. Our findings suggest that survival may be better in patients with a higher consumption of isoflavones from soy food,” John said.

This work was supported by an award from National Cancer Institute of the National Institutes of Health (CA164920).