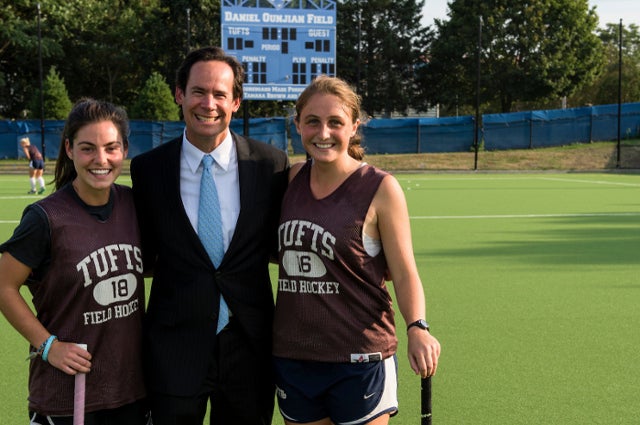 Tufts economist Dan Ounjian was a career builder for thousands of students who sat in his classroom over three-plus decades at the university. He took on the same role for junior faculty during his 20-year tenure as chair of the Department of Economics.

“He really embodies the best of Tufts,” said Doug Rachlin, A85, A20P, one of legions of Ounjian’s former students who draw a straight line between their professional success and the professor who was both a teacher and a coach. Ounjian, A57, J85P, died in 1993, shortly after retiring from Tufts.

“Even students who were lacking in confidence and on the quiet side felt very comfortable reaching out to him,” said Rachlin, one of those reticent students, who is now managing director and senior portfolio manager at the investment firm Neuberger Berman.

Rachlin decided he wanted to honor his former academic advisor in a way that would full-bore celebrate the man who had quietly, yet deliberately, shaped the lives of so many students and faculty. He made a generous donation that galvanized others, including parents of current and former team members, to make gifts to build a field of dreams for the Tufts field hockey team.

The Daniel Ounjian Field, a new synthetic turf field with lights, located across College Avenue from Cousens Gym, “is so much more than a hockey field,” Rachlin said. It has opened up additional practice time for Tufts’ club and intramural teams as well as for youth sports in neighboring Medford and Somerville.

“And the field hockey players are thrilled, and it’s so cool to see that,” he said. Thrilled would be an understatement. The team advanced to the NCAA Division III National Championship, eventually losing, 1–0, in double overtime and a shootout to Messiah College on November 20. But before that disappointing loss, there were some glory days on Ounjian Field. The team hosted—and won—the New England Small College Athletic Conference title and the second- and third-round games of the NCAA tournament.

“We now play on the best field possible for our sport,” coach Tina McDavitt said, “and the results spoke for themselves this season. We are so grateful for the amazing gift that has allowed our team to take our game to the next level. This field will continue to help our team compete at the national level for years to come.”

Twelve other Tufts parents, alumni and friends contributed to build the $2.4 million field. “This is a great way of honoring a great professor who made a positive impact on my life and on the lives of so many students while he was here,” Rachlin said.

Ounjian, who received his Ph.D. in economics from Harvard University, returned to Tufts to teach in the economics department in 1962. An expert in public financing and investment banking, he continued to teach freshmen after being appointed department chair in 1973. He took on numerous department duties to free up junior faculty to pursue their own research. But it was Ounjian’s devotion to his students—he was named an Outstanding Educator of America in 1974—that particularly stood out to those who knew him. “He was very much a student’s professor,” Rachlin said. “He turned on that light switch of learning.”

But the professor was so much more, as Rachlin found out when he took Ounjian’s money and banking class as a junior. His father, Barton Rachlin, E59, had passed away a year earlier. “I didn’t really have that type of person I could go to,” Rachlin said. “Dan was someone I could.” Ounjian was there for Rachlin during his senior year, offering encouragement, perspective and advice. Rachlin went on to work as a financial analyst at Morgan Stanley, but he stayed in touch with Ounjian, calling him about whether to get an MBA—he earned that degree from NYU in 1990. “I was someone who was lacking confidence,” Rachlin said. “Dan helped instill that confidence in me.”

Rachlin went on to establish himself as a top investor and an expert in master limited partnerships. Still he continued to remember the teacher who guided and supported him, donating to a scholarship in Ounjian’s memory. In 2014, he established the Rachlin Family Endowed Scholarship Fund to help Tufts undergraduates.

“Dan Ounjian passed away too soon, but what he did here has continued,” Rachlin said. “There’s this transition, going from reluctantly reading and learning to pursuing this knowledge because you want to and you enjoy it. That’s the Tufts education. That’s what it did for me.”

Invest in Workers to Invest in the Future