Danielle Nierenberg, N01, founder of Food Tank, forges unlikely alliances in an effort to feed the world. She brings her cause to Tufts on April 1 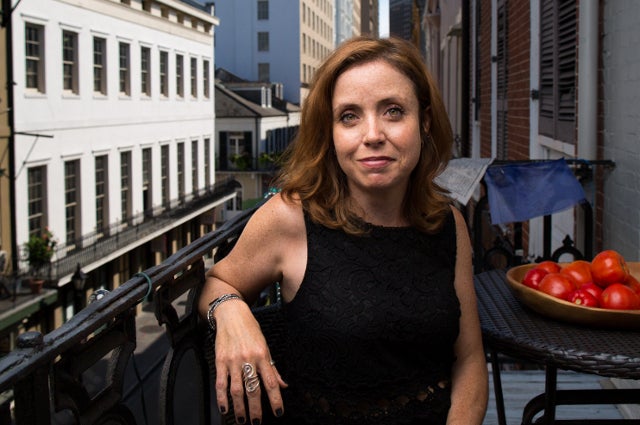 Danielle Nierenberg, N01, could see smart ways that we could feed the hungry, fight obesity and still preserve the environment. She just needed a lot more people to know about them. So she quit her job, took $6,000 of her savings and set out to see if a global network of concerned citizens—from academics and farmers to activists and moms and dads—could help build a more sustainable, nutritious food system.

The nonprofit she founded, Food Tank: The Think Tank for Food, which will sponsor a two-day summit at Tufts on April 1, has built a worldwide social media and online following of more than 500,000 people from 190 countries in just four years. As president, Nierenberg, an alumna of the Friedman School’s Agriculture, Food and Environment Program, uses Food Tank to promote environmentally sustainable ways of alleviating hunger, obesity and poverty. The solutions are as diverse as those who devise them—homeowners in Florida and California who donate their lawns as organic garden space, a man who makes rooftop gardens in Hong Kong, an Australian group that rescues surplus airline food to feed the hungry.

Food Tank’s stories—light on wonky jargon and heavy on the “food heroes” behind the innovations—have found an audience. Nierenberg’s commentaries on food waste, urban agriculture, climate change, family farms and the like have appeared in the New York Times, the Wall Street Journal and many other national and international newspapers. Last year, more than 30,000 people livestreamed the conferences and events the nonprofit hosted.

The April 1 summit, for which Food Tank is collaborating with the Friedman School and Oxfam America, will focus on investing in discovery. It will take place on Tufts’ health sciences campus in Boston and feature more than three dozen speakers, including Boston chef Jody Adams; U.S. Rep. Jim McGovern, D-Mass., co-chair of the House Hunger Caucus; Tufts faculty members; food company reps; and a California rancher and pork producer.

Nierenberg, a former program director for the Worldwatch Institute, an environmental think tank, talked with Tufts Now about why she likes conferences that don’t preach to the choir, how the Peace Corps challenged what she thought she knew about farmers, and why she sees hope in unexpected places.

Tufts Now: You studied environmental policy in college and then spent two years with the Peace Corps, working with farmers in the Dominican Republic. How did that influence you?

Danielle Nierenberg: I went in as a know-it-all, thinking I could save the world. I thought that all farmers were the same, part of one big industry. I blamed them for destroying the environment. That all changed for me in the Peace Corps. Being on the ground, I saw there are farms of all sizes doing things in different ways, both bad and good. I realized those farmers who I was working with had a lot more to teach me than I could ever teach them.

I saw all the connections between how we treat the land and nutrition, and how we treat farmers. The more farmers have resources and ideas and connections with other farmers, the better they can do their jobs. Realizing how important they are, and being able to tell their stories through what I do now, is one of the greatest joys of my life.

During your 11 years at the Worldwatch Institute, you spent months traveling through sub-Saharan Africa, Latin America and Asia talking to farmers, scientists and others about food. You met women in Nairobi who were growing vegetables in sacks and farmers in Malawi using nitrogen-fixing trees to enrich the soil for crops. What was your takeaway?

A lot of what we did at Worldwatch was very gloom and doom. But the work I was seeing on the ground was very hopeful and coming from unexpected places. Despite everything we’ve been hearing, sub-Saharan Africa has a lot of potential to be the leader in sustainable agriculture and preserving biodiversity and creating better equality for youth and women.

I was seeing really innovative things that weren’t getting a lot of attention. I wanted to put a human face on these issues, share them with other farmers, scientists and researchers, and focus on what’s working rather than what’s not. It’s what inspired me to create Food Tank.

Food Tank does seem to have a very positive outlook—you’ve posted stories like “Nine Women of Color Who Are Changing the Food Industry” and “10 Farmer Training Programs Helping Veterans Heal.”

We do have to talk about the problems, but I think at this point, we all know what they are. We really need to highlight the solutions. Without that, you don’t have any hope. If you spend time in sub-Saharan Africa, or even in rural America, you can look around and feel very despondent. If you don’t look for the good and realize there is potential there to be scaled up, then we could all just give up. The urgency of these issues is too great to give up. We have so much to do.

When you started Food Tank, you said you hoped it would be “a way for folks who aren’t talking to each other yet to get together.” Why is that important?

Our biggest mission with the summits is to have some uncomfortable conversations and come up with some unusual and unlikely alliances, so we’re not demonizing corporations or politicians or farmers. There is a lot of synergy and opportunity if we decide to listen rather than put our blinders on.

We get criticized for it a lot. There are people, especially from the sustainable agriculture community, who cannot believe that we would have Monsanto or Bayer on a panel. My answer to that is always that we have to listen to them, because they have a lot of money and a lot of power, and these are people who believe they are helping the world.

I feel like we in the food movement have been really good about making each other feel good about what we eat and where it comes from, but we’re not so good about reaching outside our own comfort zone. And I get it—I’m not a fan of Monsanto or Bayer either, for a lot of different reasons. It was hard for me personally to begin to talk to them. But whether it’s the U.S. Farm and Ranchers Alliance or Cargill, we’re really making a concerted effort to talk to those folks. We have to talk to them if we want to make change happen.