Found Treasures: Jester Hairston and the Art of Singing

A well-known composer and choral director, this Tufts alum brought the spirituals of his heritage to a wide audience 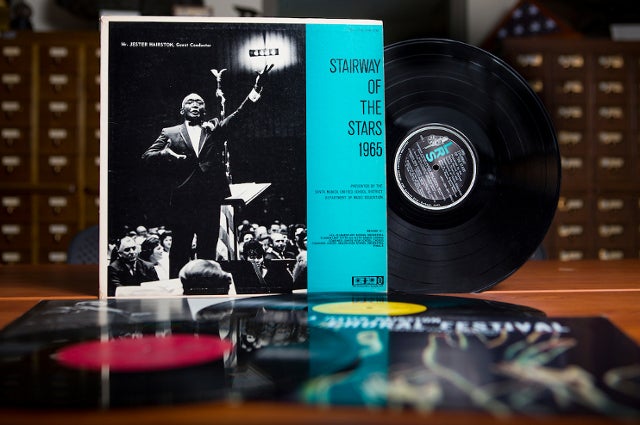 In his long life, Jester Hairston, A29, H72, was a celebrated musician, actor, composer and choral director. After a successful career on stage and in film and television, he traveled throughout the United States, Europe, Asia and Africa, leading student choirs in performances of the music he learned from his grandmother, a former slave.

“If it wasn’t for old timers like me, those spirituals, gospel songs, work songs and play songs wouldn’t be remembered,” he told a newspaper reporter in 1973. “I don’t think those songs should be forgotten, because they are a part of black history.”

Hairston’s devotion to his musical heritage is chronicled in the Tufts Digital Collections and Archives, located in Tisch Library on the Medford/Somerville campus. The Jester Hairston Collection, which came to Tufts after his death in 2000 at age 98, contains interviews, correspondence, clippings and musical scores from the 1920s through the 1990s. There are 800 records from his personal collection, including more than 100 LPs that document his musical legacy as a choral director and guest conductor for church, school and camp choirs across the country from the 1960s to the 1980s.

The collection brings Hairston’s life full circle. Just across the street from Tisch Library, at 20 Professors Row (now home of the Center for Humanities at Tufts), he met Tufts music professor Leo Rich Lewis, A1887, H22, in 1924.

Hairston had arrived in New England from Pittsburgh to study landscaping at the Massachusetts Agricultural College in Amherst. But when a local choirmaster heard him sing, she urged him to change course. On her recommendation, Hairston traveled to Medford to audition for Lewis.

We don’t know what Hairston chose to sing as he stood on the front porch of Lewis’ home at 20 Professors Row, but clearly Lewis was impressed, and Hairston was immediately admitted to Tufts.

After graduating in 1929, Hairston spent two years at the Juilliard School in New York City before he got his big break on Broadway, becoming conductor for the famous Hall Johnson Negro Choir, acclaimed for many of the greatest performances on stage and screen in the 1930s and ’40s. 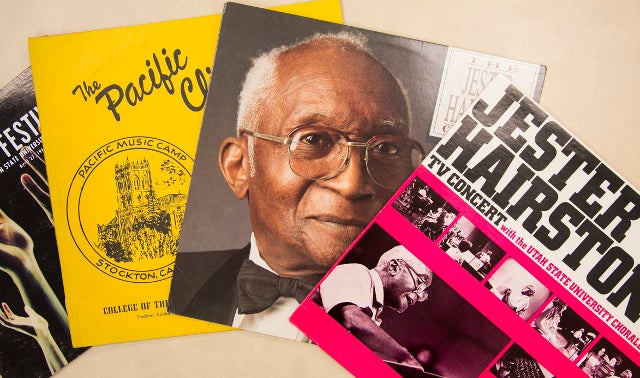 Photo: Kelvin Ma
Hairston credited Johnson, a musical historian, with inspiring him to see the value of his people’s music. “I’ve carried on his work,” he told the Cape Cod Times in 1980. “I’m preserving Negro spirituals because they are as much a part of America as baseball.”

Hairston brought the choir to Hollywood in 1936 for a six-week motion picture contract—and never left. He arranged and wrote music for movies such as Frank Capra’s 1937 hit Lost Horizon, work that cemented his status as a preeminent choral director. In 1943, he formed his own choir, the Jester Hairston Singers, which was featured in films such as Red River, Duel in the Sun and Three Godfathers.

A prodigious songwriter, he also wrote or arranged hundreds of spirituals. He is best known for writing “Amen,” which he also dubbed for the 1962 Sidney Poitier film Lilies of the Field. His 1956 composition “Mary’s Boy Child” is still a widely performed Christmas song.

He made time for acting, first in films and later on the radio show Amos ‘n’ Andy. Described by the San Francisco Chronicle as an “agile comedian with an impish sense of humor,” his talents were a perfect fit for television, and he gained a whole new audience in the mid-1970s in the sitcom That's My Mama. When he was 85, he started playing the role of Rollie Forbes in the NBC sitcom Amen, which aired from 1986 to 1991.

Hairston led youth choirs across the country—from Decorah, Iowa, to Encino, California—in songs he made popular through his arrangements and songbooks. Songs like “Deep River,” “Ain’t Got No Time to Die,” “Sometimes I Feel Like a Motherless Child” and “Who’ll Be a Witness for My Lord?” are performed on his many albums with those groups and are well represented in the Tufts collection.

He talked about the role of his music in a 1972 interview in Columbia, South Carolina, where he was a guest conductor for the State Baptist Youth Music Festival.

“I try to communicate love through song,” he said. “I am pleased to see young people, black and white, working together the way they do, and someday we’ll have peace. I believe the young people are going about it the right way. We must have love before we can have peace.”