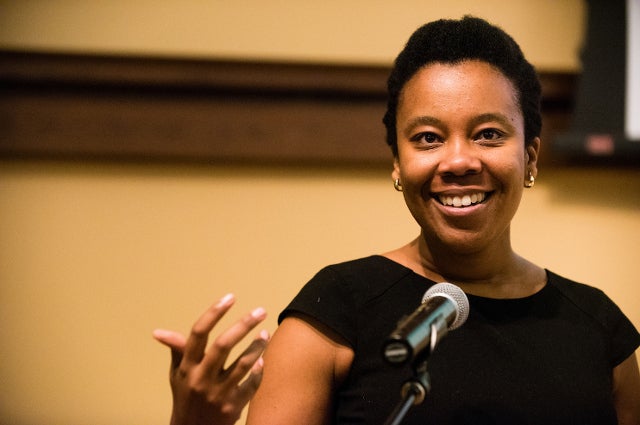 Jennifer Bailey, A09, walked through the U.S. Senate cafeteria on Capitol Hill in January 2015, alongside a rabbi and a Buddhist monk. They and others carried signs that proclaimed, “God can’t breathe.” They sang a civil rights anthem to protest a grand jury’s failure to indict a New York City police officer in the death of Eric Garner, who reportedly gasped for breath as he lay dying on a sidewalk on Staten Island on July 17, 2014.

The protesters came from many faiths, but they all sang as one, said Bailey, who was ordained as a minister in the African Methodist Episcopal (AME) Church at age 26. As the founder and executive director of the Faith Matters Network, Bailey has emerged as a national leader in the multifaith movement for social justice. She said the seeds of her activism were sown at Tufts through the Tisch Scholars for Civic Life, a leadership development program that prepares students to create change in the world.

“Tisch College was where I grew up,” Bailey said. “It was a platform to begin exploring my deep passion for justice and equity with a community of peers asking really similar questions.”

The scholars program, now in its 16th year, accepts about 20 students each year; participants combine fieldwork with academic coursework and skill-building. Tisch College counts on philanthropy to help support the program.

Along with aiding other organizations and nonprofits, this year’s scholars worked for the Somerville Food Security Coalition, created a Black Student Union at Medford High School, promoted housing and workers’ rights through the Chinatown Progressive Association, and helped immigrants prepare to apply to college.

As a Tisch Scholar, Bailey spent her sophomore year working for the Somerville-based nonprofit Teen Empowerment, which encourages young people to address problems in their communities. “These kids were just as smart as the people I was in class [at Tufts] with,” Bailey said. “It helped me understand inequity in a new way.”

During her junior year, she created the Tufts Social Justice Arts Initiative, organizing public art performances and poetry slams to raise campus awareness of homelessness, racial and social inequality, and other issues in surrounding communities. “Artists and religious figures play the unique role of social commentators—not just in terms of saying what’s going on, but imagining something different,” said Bailey, who earned her theology degree from Vanderbilt University Divinity School.

Tisch Scholars take courses in which they analyze social issues and reflect on their fieldwork; there are workshops for them to hone skills such as community organizing and public speaking. They also complete capstone projects. Bailey and Nora Chovanec, A10, BFA10, organized a national arts and social activism conference at Tufts. “Art, like religion, is transcendent,” Bailey said. “It gets us out of our head space and into our hearts. It’s a powerful way of shifting culture.” 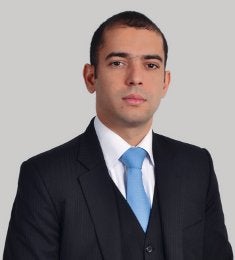 “Engineering isn’t about structures—it’s about people and how we connect with others,” said Malek Al-Chalabi.
Tisch Scholars make their mark in all kinds of arenas. Malek Al-Chalabi, E09, is a part of the health, safety and environmental team at one of the world’s largest energy companies. His team, which is based in Dubai and oversees the firm’s operations in Iraq, has been recognized for achieving best-in-class safety practices across the company.

Asked why he loves what he does, Al-Chalabi eschewed talk about technology and instead described a company-sponsored leadership training program in Antarctica that was run by 2041, an environmental group that aims to protect the world’s last untouched continent. “Seeing the ice break in front of me took things to a whole other level,” he said. “It showed me what we’re trying to protect.”

“Engineering isn’t about structures—it’s about people and how we connect with others,” he said. “We are more than our technical disciplines. We play a role in contributing to communities and the energy landscape.”

It’s a lesson he first learned as a Tisch Scholar, working with Groundwork Somerville, city engineers and others to study environmental issues that impact the health of the community. The results and recommendations were presented to Somerville Mayor Joseph Curtatone. “That really sparked something in me in terms of starting to think across social and technical lines and bridging them together,” he said.

During his second year as a Tisch Scholar, Al-Chalabi worked for the Stockholm Environmental Institute, researching the interplay of climate change and energy use. He said he came to understand just how many perspectives go into a single policy—and how much change one policy can create. His capstone project about the U.S. Green Building Council’s Leadership in Energy and Environmental Design (LEED) certification program took him to Boston, Dubai and Sydney, Australia.

Determined to use his engineering education to contribute to the energy industry, he went on to earn a master’s in environmental technology and energy policy at Imperial College London and a doctorate in energy transitions at the University of Oxford before taking his current job.

His experiences as a Tisch Scholar inform the work he does every day. “The Tisch Scholars Program took me out of the classroom and put me on the street,” he said. “The program taught me to discover my passion and act on it.”