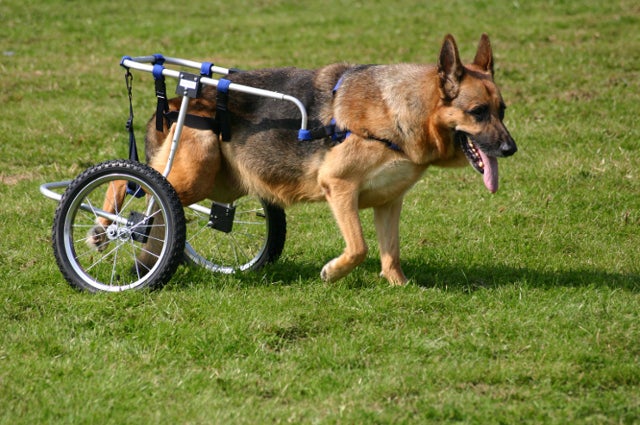 A gene-silencing therapy under development for people with amyotrophic lateral sclerosis (ALS) is being tested at Tufts in dogs with degenerative myelopathy, a fatal paralytic disease that is similar to ALS.

“If you look at the clinical progression [of degenerative myelopathy], a dog will go from dragging a toe, to stumbling, to falling over when it turns quickly,” said Dominik Faissler, the veterinary neurologist at Cummings School who is leading the study. As the disease progresses, a dog can no longer stand.

“What’s so extraordinary is that the dog is a naturally occurring model of one form of the human disease,” said Robert H. Brown Jr., a University of Massachusetts Medical School neurologist who is one of the world’s foremost experts on ALS and other neurodegenerative diseases. He approached Cummings School about testing the therapy developed in his lab, with the goal of speeding up clinical trials in humans.

“In dogs, it turns out there’s a mutation in the SOD1 gene, which normally makes an antioxidant protein that helps protect nerve cells from a variety of cellular stresses and injuries. When this gene gets mutated, it becomes toxic to nerves, killing off the motor neurons in dogs the same way that this genetic mutation does in some people with ALS,” said Brown, the Leo P. and Theresa M. LaChance Chair in Medical Research and chair of neurology at UMass Medical School.

Canine degenerative myelopathy causes progressive paralysis in older dogs in a number of breeds, including German shepherds, boxers, corgis, Chesapeake retrievers, Rhodesian ridgebacks and Bernese mountain dogs, Faissler said. “There is likely a genetic defect that interferes with the survival of the spinal cord tissue and brain tissue,” he said. As in humans with ALS, dogs with degenerative myelopathy eventually die when the respiratory system stops working, but often pets are euthanized before.

The dogs in the Tufts trial receive a single spinal fluid injection of an engineered adenovirus—from a family of viruses that can infect the nervous system, but is best known for causing the common cold. The engineered virus was designed to breach the blood-brain barrier to deliver DNA particles that turn off—or silence—the mutated gene.

“This barrier is normally a very good thing, because it keeps bacteria out of our nervous system,” Brown said. “But we must get the treatment to the cells where it can actually take effect, and a virus knows how to wend its way through that iron curtain.” The therapy has shown promising results in mice genetically engineered to have a condition similar to ALS, he said, and it also was safe when tested in normal monkeys.

Dogs in the Cummings School trial, which began in December 2016, are checked every three months and undergo tests, which are videotaped, to assess their neurological and motor function. Four dogs are currently in the pilot study. So far, the therapy appears safe in pets, but Faissler and Brown said it’s too early to determine whether it will halt or reverse the disease. “Does it work? That’s the question I wake up and go to bed with every day,” Brown said.

“Giving these pets another one-and-a-half to two years of life would be a major success,” Faissler said. “Better yet, we’d be doing something for dogs that at the same time contributes to human medicine.”

A successful trial in dogs could be a prelude to a clinical trial in people, Brown said. Ionis Pharmaceuticals, a California biotech company, is already testing a different gene therapy for SOD1-related ALS and for a similar type of mutation in patients with Huntington’s disease, which attacks nerve cells in the brain. Such treatments one day could be used for a number of neurodegenerative and neuromuscular diseases, Brown said, including Parkinson’s, Alzheimer’s and a host of diseases known as ataxias, characterized by the loss of control over bodily movements.

Veterinarians and pet owners interested in participating in the study should email neuro@tufts.edu or call Kellye St. John at 508-887-4839.