Strategy could provide roadmap for promoting innervation in regenerative medicine 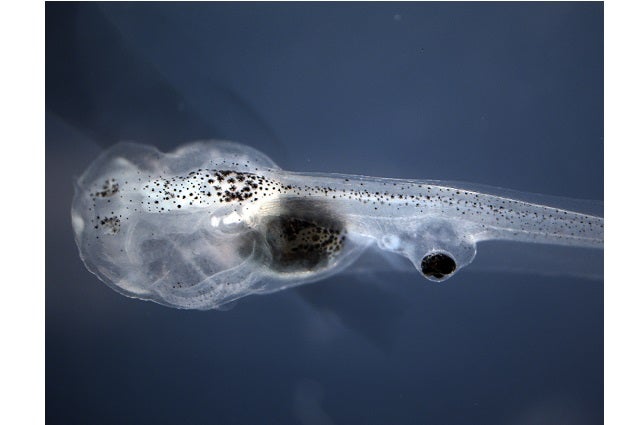 MEDFORD/SOMERVILLE, Mass. (March 30, 2017) – Blind tadpoles were able to process visual information from eyes grafted onto their tails after being treated with a small molecule neurotransmitter drug that augmented innervation, integration, and function of the transplanted organs, according to a paper published online today by researchers at the Allen Discovery Center at Tufts University in npj Regenerative Medicine, a Nature Research journal. The work, which used a pharmacological reagent already approved for use in humans, provides a potential roadmap for promoting innervation – the supply of nerves to a body part – in regenerative medicine.

The researchers sought to better understand how the nascent nerves of re-grown or implanted structures integrate into a host. A lack of innervation and integration can be a barrier in regenerative medicine, particularly for sensory organs that must form connections with the host to communicate auditory, visual and tactile information.

In an effort to identify ways to increase innervation, researchers grafted eyes onto the trunk of the tails of blind tadpoles. They then treated the animals with Zolmitriptan, a compound that activates serotonin receptors 1B and 1D (5-HT1B/D), which have been associated with neural development. Treated tadpoles showed a significant increase in graft innervation without changes to the host’s original nervous system.

In addition to testing the tadpoles’ ability to detect color, the researchers also tested true image-forming vision, by determining the tadpoles’ ability to follow optical patterns rotating in clockwise and counterclockwise directions. Dishes of tadpoles were placed above an LCD screen displaying patterns of triangular clusters rotating slightly every second. Eighty percent of sighted tadpoles followed the pattern compared to 38 percent of blind tadpoles and 32 percent of tadpoles with untreated eye grafts. By contrast, 57 percent of tadpoles with innervated eye grafts induced by exposure to the 5-HT1B/D agonist drug were able to follow the rotating patterns.  Importantly, this drug is currently in use for treatment of migraine in human patients, providing a proof-of-principle of repurposing neurotransmitter drugs for regenerative medicine in general, and for control of innervation and transplanted organ functionality specifically.

“For regenerative medicine to move forward and enable the repair of damaged tissues and organ systems, we need to understand how to promote innervation and integration of transplanted organs,” said the paper's corresponding author, Michael Levin, Ph.D., Vannevar Bush professor of biology and director of the Allen Discovery Center at Tufts and the Tufts Center for Regenerative and Developmental Biology. “This research helps illuminate one way to promote innervation and establish neural connections between a host central nervous system and an implant, using a human-approved small molecule drug.”

“The fact that the grafted eyes in our model system could transmit visual information, even when direct connections to the brain were absent, suggests the central nervous system contains a remarkable ability to adapt to changes both in function and connectivity,” said Blackiston.

Work was supported by the Allen Discovery Center program through The Paul G. Allen Frontiers Group, and The G. Harold and Leila Y. Mathers Charitable Foundation.