The Place to Be

With a record number of applicants, the acceptance rate for the undergraduate Class of 2021 is 14.8 percent 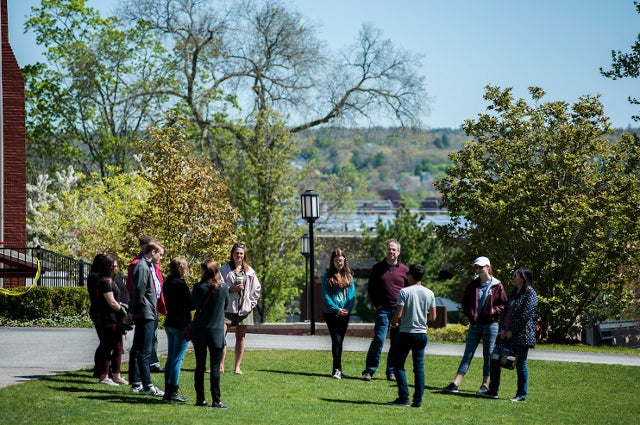 The Tufts undergraduate Class of 2021 represents the second most selective class in university history and set a new record for the number of applications submitted, according to the Office of Undergraduate Admissions, which notified accepted students in emails on March 30.

There was a record 21,101 applications to the School of Arts and Sciences and the School of Engineering, up from 20,223 last year. Combining both early decision and regular decision, 3,128 students were admitted—an acceptance rate of 14.8 percent, just behind last year’s record low of 14.3 percent.

“We definitely have a strong class in terms of academics,” said Karen Richardson, dean of undergraduate admissions and enrollment management. “They bring a remarkable variety of experiences and perspectives that will greatly enrich the Tufts community.”

She noted that this full admissions cycle included for the first time applications to the School of the Museum of Fine Arts (SMFA) at Tufts; 50 students were admitted into the B.F.A. program and 62 to the SMFA combined-degree program. The university acquired the school in July 2016.

“Those applicants brought a different perspective” to the review process, said Richardson, “as they revealed a wide array of interests that lie in the arts.”

The incoming class is geographically diverse. Admitted students represent all 50 states, the District of Columbia, Guam, Puerto Rico and the Virgin Islands. Outside of the United States, admitted students come from 133 countries. Ten percent are citizens of other countries.

Fifty-three percent of the admitted students are women; 47 percent are men. More than half (55 percent) attend a public high school.

Eleven percent are the first in their family to go to college (up from 10 percent last year), and 48 percent of admitted students applied for need-based financial aid, up from 44 percent a year ago.

The mean SAT scores on the College Board’s “new” SAT are 729 in math and 716 on evidence-based reading and writing (formerly known as the critical reading test). The mean ACT score is a 33.

Accepted students have until May 1 to make a deposit on their first-semester tuition, letting Tufts know that they will be here in the fall. They and their families are invited to visit the campus on April 14, 20 or 21—known as Jumbo Days—to meet current students, attend classes, and experience the academic and social life at Tufts.