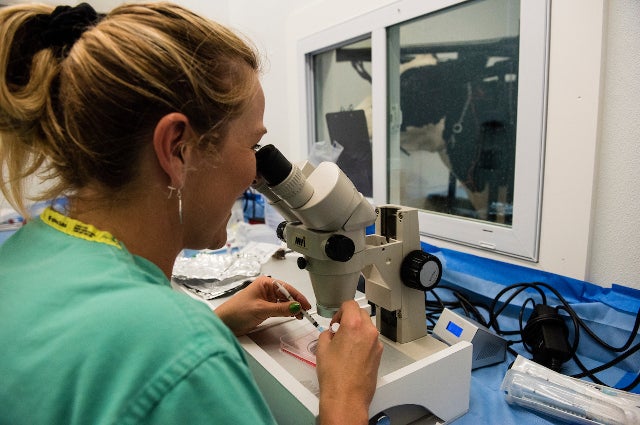 With the speed and accuracy of a video gamer, veterinarian Kevin Lindell uses a vacuum wand to snatch up unfertilized eggs from 2,000-pound Tavia, a Holstein cow. He’s drenched in sweat as a heat fan churns to keep the finicky bovine eggs at 80 degrees Fahrenheit while they’re transferred from Tavia to a petri dish in preparation for in vitro fertilization.

Lindell works for the Tufts Ambulatory Service, a group veterinary practice in Woodstock, Connecticut, that cares for dairy cattle, other food animals and horses. It is the only veterinary clinic in New England that offers bovine IVF.

Once Tavia’s eggs are nestled in a warm bath, IVF program coordinator Sarah Bowley assesses their viability under a microscope. The news is good: 26 oocytes look ready to ship 1,200 miles west to Boviteq USA, a private lab in Madison, Wisconsin, that will fertilize Tavia’s eggs with semen already sorted for sex—and return female embryos.

At age 7, Tavia has produced 160,000 pounds of milk for Pineland Farms in New Gloucester, Maine. Ideally, her embryos will be every bit as desirable for its dairy operations. The fertilized embryos will be implanted into other cows with less-desirable genetics to carry them to term, or they will be sold to other dairy farms. Embryos command hundreds or thousands of dollars, but the prices can soar much higher for the best-quality pedigrees, Bowley said.

Bovine IVF is not new, but until recently, the technology was too costly for it to be used widely. While the procedure is essentially the same as that in human medicine, it’s used for different reasons. Cows whose eggs are fertilized in vitro usually aren’t having trouble getting pregnant, Bowley said. “They’re just very important cows, so there is a demand for their offspring.” 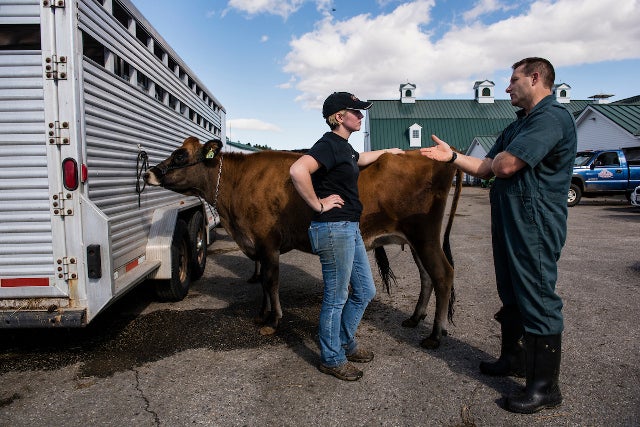 Eugene White, head of Tufts Ambulatory Service, and Shelby Crawford of Juniper Farms in Gray, Maine, discuss the cows trucked over to Pineland Farms for access to bovine IVF services. Photo: Alonso Nichols
The Tufts Ambulatory Service has been offering bovine IVF since 2015. The veterinarians collect embryos one day a month at three locations: the ambulatory practice in Connecticut; the Vermont OPU Center in Whiting, Vermont; and Pineland Farms.

“We created two satellite facilities to provide access to IVF for more farmers without making them drive the cows around for a whole day or longer,” said Lindell, who leads the IVF operation at Cummings School.

George Liberty, who manages a herd of Jersey and Holstein cows at Juniper Farms in Gray, Maine, said he appreciated being able to truck a couple of his top performers just minutes down the road. A few years ago, his closest options for IVF were New York and Maryland.

Human-assisted reproduction has been part of the cattle industry since the late 1940s, when veterinarians perfected artificial insemination, which now accounts for 85 percent of Holstein births. The growth of IVF means it’s “the cow’s time right now,” Bowley said. “Her genetics can have a much greater reach than at any other point in history.”