Holding Those in Power Accountable 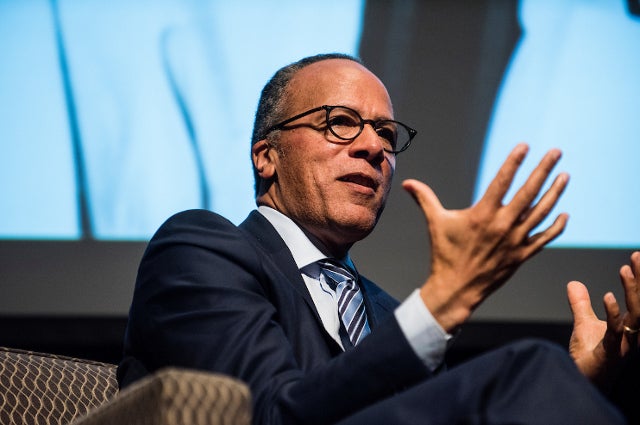 The proliferation of “fake news” has made journalism more complicated—particularly since President Donald Trump often refers to the mainstream media as “dishonest,” said Lester Holt, anchor of NBC Nightly News and Dateline NBC, during a talk at Tufts on April 12.

“It is troubling, because every time you label an unflattering story as fake news, you’re really attacking one of the important institutions” of a free society, said Holt, who headlined the university’s 12th annual Edward R. Murrow Forum on Issues in Journalism. “Freedom of the press is one of the most important pillars of a democracy.”

Still, “it will take more than an insult from the White House to erase a legacy” of hard-hitting journalism, he said.

That criticism, he added, “has made us more focused on our mission. . . . This is not a popularity contest. People aren’t going to like us. That’s never been an issue.”

Holt’s nightly broadcast regularly ranks as the most-watched evening news program in the United States. Last year he was tapped to moderate the first presidential debate between Donald Trump and Hillary Clinton. He said that Tom Brokaw, who anchored NBC Nightly News from 1982 to 2004, is a mentor. He also shared his admiration for the late Ed Bradley, “not only as a journalist, but as a person of color; he reminded me there were opportunities in this business.”

Jonathan M. Tisch, A76, vice chair of the Tufts Board of Trustees, interviewed Holt as part of the Murrow Forum. Tisch asked the newsman how he approaches reporting on difficult situations, from Afghanistan to a Katrina-battered New Orleans.

“I believe compassion is an integral part of what we do,” Holt said. “I’ve covered situations where people have been through horrible calamities, and I always go through this process of putting myself in the situation. What if it had been my house that had been blown away by the tornado? Where would I be right now? I’d be balled up in a corner bawling my eyes out.” 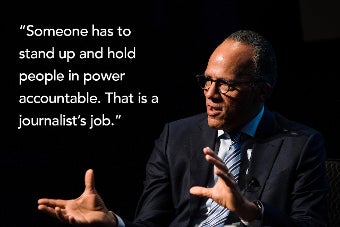 When he is reporting one of these stories, Holt said, “I keep reminding myself that I’m the intruder here, and it’s important to get their story, but not at the expense of being disrespectful.”

Returning to challenges facing today’s media, including the notion of “alternative facts” muddying the waters of what’s real and what’s not, Tisch recalled a recent cover of Time magazine that asked “Is Truth Dead?” He asked Holt, “Do you see society slipping away from what is real and truthful?”

Holt framed his response via a lens of context: a media landscape spread increasingly thin across multiple and ever-changing platforms, and one in which people are making distinctly individual choices about what they want to see and read.

Given that, Holt said, “truth is going to be whatever you want it to be. That is why I think what [journalists] do is so incredibly important right now. We have to be the port in that storm of information” by reporting the news “with honesty and integrity.”

Before his talk, Holt visited the Edward R. Murrow Center for a Digital World at the Fletcher School. Looking at the papers of the legendary CBS newsman, Holt said, reminded him “that there has always been an adversarial relationship between those in power and reporters, because we’re the ones trying to hold the people in power accountable.”

A 140-character tweet from President Trump that might touch on a policy can be particularly “troublesome,” he said, because “as a reporter, you want to follow up” with questions. “What we want as reporters is access. We need to bear witness . . . on behalf of the American people.”

Asked about the future of journalism, Holt said in some ways its core mission remains fixed. “I’m doing the same thing I did 35 years ago—I tell stories,” he said. “What’s changed is where you might see me—you might see me in the back of a taxi or on American Airlines or on your phone. And that might change—you might see me on your wallpaper or your refrigerator” in the future.

Choosing Body Positivity in the Face of Fatphobia