Why Are There Minds? 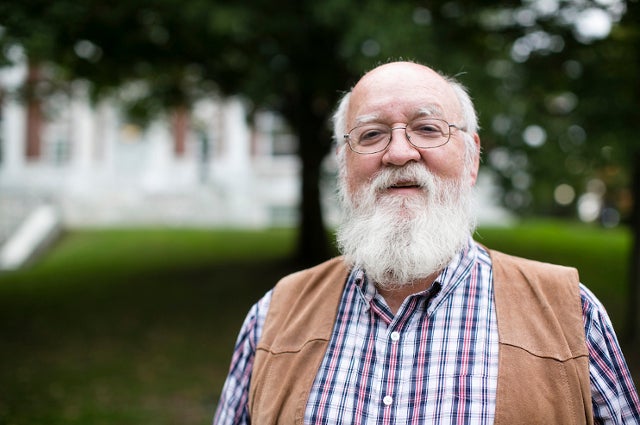 Daniel Dennett has dedicated the last 50 years of his life to methodically stripping the magic, mystery and God from the world. Now the Austin B. Fletcher Professor of Philosophy is out to answer once and for all two questions that have been perplexing him—and others—for decades: How come there are minds? And how is it possible for minds to ask and answer this question?

That’s the subject of his latest book, From Bacteria to Bach and Back: The Evolution of Minds (W.W. Norton), a dense opus drawing up the many disparate topics Dennett has debated for decades, bolstered with evidence from neuroscience, linguistics, natural history, technology—even chess and French literature.

“Over the years, I’ve encountered not just skepticism about the nature of mind, but a sort of antagonism—‘I don’t want to think about that, I don’t want to think that way,’” said Dennett, co-director of the Center for Cognitive Studies. “And so I’ve come up with various ways of cajoling, almost seducing people into turning things around in their heads. I’ve got a whole lot of pieces that fit together now, and the idea is to get people to see that.” 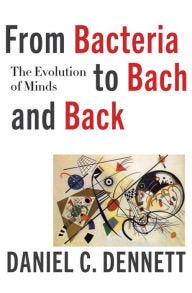 The dominant theme of the book will be a familiar one for the Dennett faithful. Beginning billions of years ago with non-living molecules floating in primordial soup, through to the evolution of modern man, Dennett argues a purely Darwinian trajectory. The world’s creatures are all a simple product of natural selection’s brute force trial-and-error approach, constructed one meager reproductive advantage atop another.

Most of the time, these creatures are ignorant as to what they do or why—“competence without comprehension.” The Australian cathedral termite, a favorite example of Dennett’s, builds elaborate structures that regulate temperature and gases in its underground colonies. But the termites don’t know that; they just do what nature selected for them to do by rewarding those that built ever-greater complexity with survival, and killing the rest. “There is,” as Dennett writes, “no architect termite.” He likens it to a computer, grinding dumbly away at complex mathematics.

“If you think about our predicament, it looks flat impossible that we could get any knowledge at all.”

However, not all creations are equally blind. Sometimes, when it proved useful, natural selection allowed competence to breed a degree of comprehension and problem-solving. Learning and remembering where the good hunting grounds are boosts a sophisticated predator’s survival. Figuring out how to use a twig to fish tasty ants from a nest gives a clever chimpanzee an edge over the competition.

But what about the difference between the twig-using chimp and the sonata-writing Bach? Genetic evolution alone can’t account for that cognitive leap. And to solve that riddle, Dennett turns to an alternative route: memetic evolution.

“This was the hardest part to write,” he admitted. “And the part where there’s the most controversy.”

At their simplest, memes are culturally transmitted ways of behaving—tool-using, gestures, sounds shared from person to person. “They’re thinking tools that we don’t have to design ourselves,” Dennett explained. “We can simply acquire them from the culture, and they’re as simple as a simple word.”

In fact, it is the simple word that’s key to the human mind, he argues.

When early humans adopted the sounds and symbols of language, Dennett posits, they essentially acquired a parallel DNA. This is no metaphor. Dennett believes that the limited sounds of syllables operate as intangible nucleic acids that can be combined and recombined in order to transmit complex information. Except instead of the four such bases that DNA is limited to (adenine, guanine, cytosine and thymine), there are 44—at least in English. That’s how many different sounds our language’s syllables can create.

This massively increased the amount and type of information that humans could pass along to each other, setting the stage for learning and teaching, and eventually even contemplation and creativity. “Communicating with others is what drives our capacity to communicate with ourselves,” Dennett said. “This enables you to build on the information you already have.”

How all this evolved is still a work in progress, although Dennett is certain it was still an incremental evolution, like all of natural selection’s products. He suspects that it came out of an ancestral, evolved predisposition to imitate and make mouth-sounds that gradually became more systematic and useful. From our competence with that, we gained comprehension, and each advance built recursively upon itself until at last, we had invented language. “But the order in which all that happened, and what primes the pump—these are still wide-open questions and I don’t claim to have all the answers there,” he said.

Dennett also delves into how these comprehending minds actually work, returning to a set of ideas initially championed in his 1991 book, Consciousness Explained. “If you think about our predicament, it looks flat impossible that we could get any knowledge at all,” he said. “We’re moving around at the bottom of a sea of atmosphere, which is full of all sorts of moving things, and photons are bouncing off things and onto our bodies by the trillions every second—and so how on earth do we take this astronomical flood and turn that into our sense of living in the world, where there are tables and chairs, and sunsets and smiles?”

Most of that information, he said, the brain filters out. What remains gets packaged into the user-friendly illusion we all live. It’s the desktop version of reality, generated out of sensory data that has been interpreted through the lens of past experience and acquired knowledge. Memes function like software applications that expand and upgrade this basic system. Readers of this article are utilizing their basic English app; those who go on to read From Bacteria to Bach and Back in full will have a chance to patch additional philosophical memes onto that, like umwelt, ontology and manifest image.

By now, our species has upgraded and added to its memetic software so many times that our knowledge base for comprehending and acting upon this world is now extraordinarily powerful. Evolved through unintelligent forces, we have become intelligent designers, composing symphonies and cities and artificial intelligence. But, said Dennett, this capacity is not without its risks: we have also designed and fallen prey to malware, like Nigerian prince scams, fake news and professional propagandists.

In the end, From Bacteria to Bach and Back is Dennett’s own attempt to promote the truth as he sees it. For many, his ideas will still be difficult—there’s no room for miracles in the picture that he sketches, only billions of years of countless evolutionary steps. But that doesn’t have to mean that there’s no wonder to be found—on the contrary.

“It seems to me that the brain is more beautiful than ever,” Dennett said. “I know tastes differ, and some people prefer mystery to explanation. But when the explanation is so incredibly complicated and convoluted and elegant and devious and clever.... I mean, my golly, nature is grand, and yes, it’s a bag of tricks. But what a bag of tricks.”

Our Brains, Our Selves: Daniel Dennett

Do We Deserve Our Punishments—and Our Rewards?