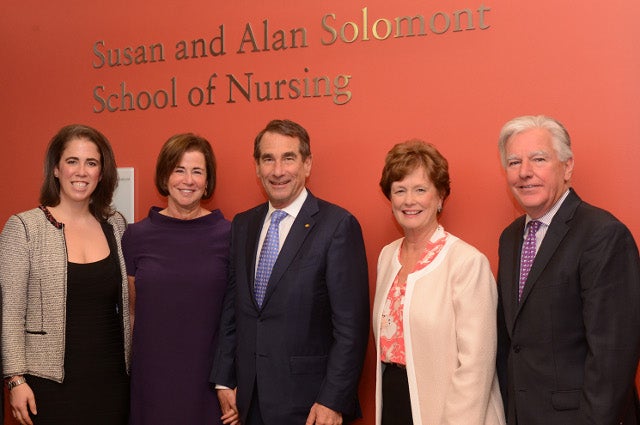 The School of Nursing at UMass Lowell has been renamed in honor of Susan and Alan Solomont. Both are Tufts alumni, and Alan Solomont, A70, A08P, is the dean of the Jonathan M. Tisch College of Civic Life and former U.S. ambassador to Spain and Andorra.

The dedication of the Susan and Alan Solomont School of Nursing took place April 27, in recognition of the Solomonts’ decades of support for UMass Lowell, including a new fund providing scholarships and academic support to nursing majors. Alan Solomont received a nursing degree from what was then the University of Lowell in 1977, and later was a member of the university’s board, serving as chair at the time it became a part of the University of Massachusetts.

“Having the nursing school at UMass Lowell named for Susan and me is profoundly meaningful on account of the roles this school and this city have played in my life and the life of my family,” Solomont said at the ceremony.

After graduating from Tufts, Solomont worked as a community organizer in Lowell—the city where his immigrant grandfather had once earned a living as a fishmonger—and decided to attend nursing school after an experience working as an orderly at a nursing home. “I loved being a student here,” he said. “I loved the science of the human body and the science of nursing.”

Although it perhaps seems unrelated, that step in his career stemmed from his time at Tufts. “My journey to Lowell and nursing and to public higher education was really born out of the education I received at Tufts in active citizenship and civic engagement,” he told Tufts Now.  “I think there’s a direct line.” In his work—whether as an organizer, public servant or philanthropist—Solomont said he hopes he has shown that there are many paths to making a difference.

“The education I received at Tufts almost 50 years ago really pointed me in the direction of having an impact,” he said. “And now it’s my delight and privilege to come back to where my journey started.”

Susan Solomont, G81, A08P, is a philanthropic advisor and civic leader who has served on the boards of nonprofits and educational institutions. While in Spain, she established the Women’s Leadership Network and chaired the U.S. Embassy’s Volunteers in Action program.

Alan Solomont served as ambassador to Spain and Andorra from 2010 to 2013; was previously the chair of the Corporation for National and Community Service, the federal agency that oversees domestic service programs; and was a longtime leader in the Democratic Party.

In addition, Solomont had a successful business career in the health-care and eldercare industries.

The profession of nursing, he said, is becoming increasingly vital to the U.S. health-care system. “One of the things I learned as a nursing student is the importance of the science of nursing and the contributions it makes to well-being at every level,” he said. Lowell was the first nursing school in the country to have a master’s level gerontological nurse practitioner program, and the school has a current enrollment of nearly 600 students in undergraduate and graduate programs. “This school, which my name is now associated with, has been on the forefront in the important contributions that nursing makes,” Solomont said.