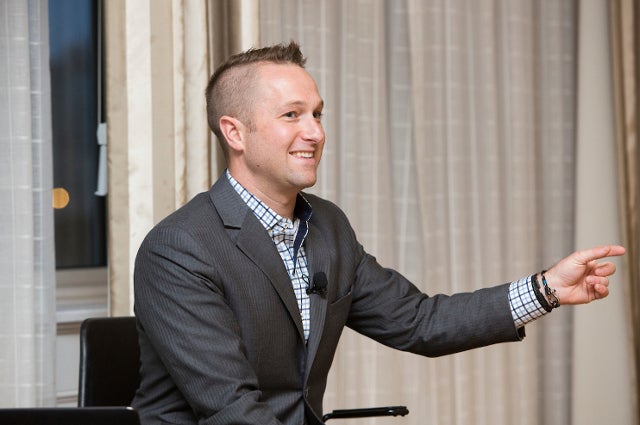 As a student at Tufts, Bobby Dutton, E04, loved going to concerts, but maybe even more enjoyed working them behind the scenes, coiling cables after shows at Suffolk Downs and Gillette Stadium till 4 in the morning.

“I always loved the performance side of music, but also the technical gadget side,” said Dutton, who delivered the spring Lyon and Bendheim Alumni Lecture to a group of students May 1 in the Alumnae Lounge. “I wanted to put it together and make something interesting.”

After graduating, Dutton did just that. His company, GrooveBoston, produces concerts for college campuses across the United States, and received the Innovator Award at the 2016 International Live Events Association’s Accelerate conference.

Rather than shelling out exorbitant amounts of money to bring the most famous artists to college campuses, or settling for lesser-known artists, Dutton explained, GrooveBoston offers a third way.

“Schools spend less on a traditional concert and get significantly more in terms of technological production and social impact,” Dutton said in a short video he screened during his talk.

The road to success wasn’t easy, Dutton said. “Our value is ‘in between,’ which makes it very hard to sell,” he said. “It was very hard to get it to stick initially.”

He recounted his years living with his parents, working freelance during summers as a production person, and holding down a part-time job as a computer programmer, laboring all the while—alone and unpaid—to establish his company. One day, overwhelmed with the setup for a big concert, Dutton messaged a friend, “I’m loading up by myself in Worcester, can you please come help me?”

Dutton was able to capitalize on the connections he built with vendors during his freelance production work, going to them when he needed to rent equipment or figure out the look and feel of a particular concert. His technical expertise and enthusiasm for all aspects of production earned him the respect, and the repeat business, of every campus he visited.

After five years, GrooveBoston became profitable enough for Dutton to leave his part-time job coding, and to hire his first employees—including the friend who answered his plea for help with the Worcester concert, who is now GrooveBoston’s production director.

Today, Dutton wears a bracelet with a small metal shackle, a miniature version of a piece he once used to hang equipment off ceilings. “I’m constantly reminded of the forces at work,” Dutton said.

The shackle symbolizes his company, which is built on connecting music and technology, design and execution, auditory experiences and visual effects.

And Dutton hasn’t forgotten his roots as a college student working concerts. He reaches out to college students on campuses where his concerts are put on, bringing them in on all aspects of the concert production process. It increases the company’s liability costs, Dutton admitted, but it also gives students the opportunity to work behind the scenes—just as he did when he was starting out.

“Although it is a little scary, I like to empower and trust students. For them to be able say ‘I bolted that together, look at it’—it’s worth it,” Dutton said. “It makes it their show.”