Studies of dogs that lose their hair from cancer treatments could benefit humans, too 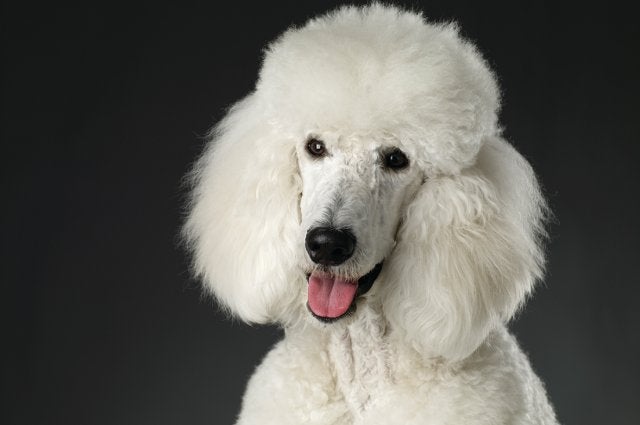 While it’s rare for dogs undergoing chemotherapy to lose their hair, when they do, some owners will stop treatment for their pets because they assume the chemo has become toxic.

“When it’s something an owner wasn’t expecting, hair loss can be very frightening, even though in reality it has minimal negative effects on the pet,” said Elizabeth Falk, V07.

To help veterinarians educate their clients about this side effect of cancer treatment, Falk and other researchers at Tufts took a closer look at the chemotherapy drug doxorubicin, which is used to treat many canine and human cancers. They studied 150 dogs that received the drug at Tufts between January 2012 and May 2014. They assessed the cases according to seven coat types and then tallied the number of patients from each group that had experienced hair loss, skin darkening or changes in their coats.

They found that dogs with two hair types—the curly or wiry hair seen in breeds like poodles and terriers—frequently experienced hair loss during chemo, most likely because their coats are more akin to human hair, said Falk, the study’s lead researcher who was a dermatology resident at Cummings School at the time. The findings were published in the journal Veterinary Dermatology in December.

In the Tufts study, 28 dogs, nearly one in five, experienced hair loss, and dogs with curly or wiry hair were significantly more likely to lose their hair than dogs with straight coats.

“Veterinary oncologists have recognized this as a phenomenon for many years, although it has not been studied systematically in veterinary medicine until now,” said Lisa Barber, a veterinary oncologist at the Foster Hospital for Small Animals and co-investigator on the Cummings School study. “Loss of whiskers and eyebrows are the most predictable forms of hair loss related to chemotherapy,” she said. “We often tell clients that dogs that need haircuts predictably lose hair and might even become close to naked, temporarily.”

It's in the Hair Follicles

The researchers also discovered that dogs that received a higher cumulative dose of doxorubicin over the course of their treatment lost their hair more often.

Falk and Barber continue to collaborate with veterinary dermatologists Lluis Ferrer and Andrea Lam on the second phase of their research, studying more dogs receiving doxorubicin in an attempt to pinpoint the cellular mechanisms that cause hair loss. Owners of dogs at high risk for hair loss can consent to allow the Tufts vets to take hair samples and perform a skin biopsy at the start of chemotherapy and again once the animals have lost hair.

“Pictures from biopsies after the hair loss show that canine hair follicles are arrested. They look dilated and weird,” said Falk. The researchers will compare gene expression in the samples before and after treatment to look for changes that might explain the molecular mechanism behind the hair loss and potentially serve as targets for therapy.

The veterinarians also are looking for the increased presence of the protein p53 in the affected dogs’ hair follicles, because the protein exists in humans with chemotherapy-related hair loss. If it’s there, what is learned from pets could, according to Falk’s review of multiple studies, help oncologists develop a treatment for the side effect that about half of human cancer patients rank as the most devastating complication.

“Dogs could be a good model for understanding and preventing the condition in people,” said Falk. While there have been some rodent models of this phenomenon, no therapies developed from these have proven safe and effective, she said. “Dogs are actually much more similar to people in the ways that their skin reacts to things.”