The Urgency of Civic Engagement

Congressman Joe Kennedy III said the administration’s credibility gap is growing, and urged everyone to engage in the political process 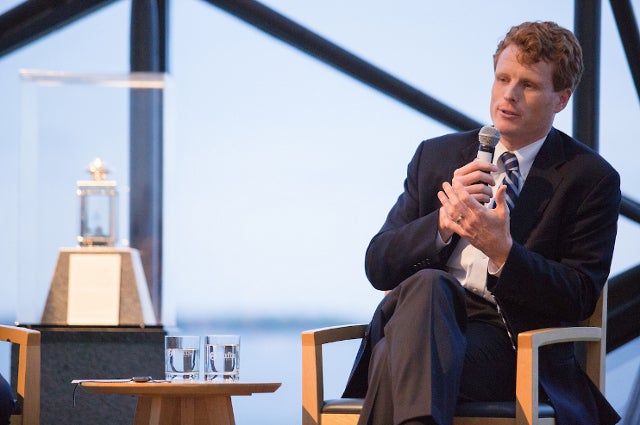 U.S. Rep. Joe Kennedy III said President Donald Trump’s firing of FBI Director James Comey reveals a widening “credibility gap” at the White House. The news broke as Kennedy participated in a Tisch College of Civic Life talk May 9 at the John F. Kennedy Presidential Library. It was the opening question, and the three-term congressman sounded off.

Kennedy said Trump’s letter stating that the firing aims to restore public trust and confidence in the Department of Justice appears at odds with reality. Kennedy said his initial reaction is that Comey made some errors over the past year. However, he said that the administration’s reason to dismiss him—Comey’s mishandling the investigation into Democratic presidential nominee Hillary Clinton’s email server—sounds dubious.

“I have deep, deep reservations that this action by President Trump restores the faith in the Department of Justice and the Federal Bureau of Investigation,” he said.

Kennedy previously joined fellow Democrats, and some Republicans, in calling for an independent investigation into the Trump campaign’s connections with Russia, and for Attorney General Jeff Sessions to recuse himself from any investigation into Russian interference in the 2016 election.

The conversation at the JFK Library, titled “The Urgency of Civic & Political Engagement,” was the inaugural forum of the Tufts Civic Life Network, a community of alumni interested in supporting Tisch College, Tufts University, and civic and democratic life.

Tisch College Dean Alan Solomont, A70, A08P, asked Kennedy for his thoughts on the political climate and advice to anyone thinking of running for office. Kennedy encouraged everyone to engage in the process and raise their voices at the local, state and national level.

As a member of the minority party on Capitol Hill, he said he is not buying into the president’s proposed solutions. He emphasized the value of context and the need to take a long view of history, and some of the country’s historic challenges.

“For those folks that are active members of a resistance—and yes, I count myself as one of them—we also have to recognize that many of the systemic challenges that affect our community here in greater Boston existed long before Donald Trump took office, and they are not a consequence of the election of Nov. 8,” he said. He mentioned existing high housing costs, inequality, under-investment in mental health services, and access to health care.

Kennedy has panned the House GOP bill known as Trumpcare, which would repeal and replace the Affordable Care Act, because it jeopardizes coverage for millions of Americans. At the Tisch College event, he said that asking the government to pass what has become known as the “Jimmy Kimmel test” seems to be a basic threshold. The television personality recently called for universal care, citing his newborn son recovering from a heart issue.

Availability of care should not be based on a parent’s ability to write a check, Kennedy said. “If you need it, you should get it.”

Kennedy also spoke about his family legacy—he and Solomont sat in front of the original Profile in Courage sterling silver award at the JFK Library—and public service.

Government is only as good as the people ready to step forward to get involved and to be a public servant, he said. The “art of politics,” part of the inscription for the dedication of the library, “is about recognizing the value of an alternate view and understanding the person across the table from you,” Kennedy said. “Their viewpoint is just as legitimate as yours.”

Dan Tuohy is a freelance writer based in New Hampshire.

A Year of Anti-Racist Work at the School of Medicine