As many as 20 million birds and other animals die annually after ingesting lead left behind by hunters, sports shooters and anglers—and the problem is about to get worse 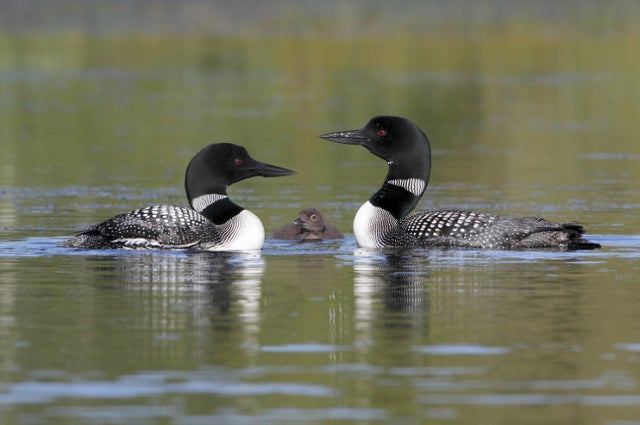 In March, conservationists cried foul when new U.S. Secretary of the Interior Ryan Zinke overturned an Obama-administration ban on using lead ammunition or fishing tackle on federal lands. Lead is toxic to the neurological systems of animals that ingest it, killing millions each year. Though lead’s poisonous effects on wildlife have been known for more than a century, eliminating it from nature continues to be an uphill battle.

Mark Pokras, V84, an associate professor emeritus of infectious disease and global health at Cummings School of Veterinary Medicine, conducted research on lead poisoning in loons that led to several state bans on lead fishing tackle. He talked with Tufts Now about the rollback of protections at the federal level, and what it means for wildlife.

Tufts Now: How are wild animals exposed to lead in the first place?

Mark Pokras: It depends on the species, but ammunition and fishing weights are the primary source of lead poisoning. Scavengers such as bald eagles, California condors and foxes ingest lead when dining on carcasses of deer, ducks, squirrels or other animals shot with lead projectiles. Other species mistakenly eat lead shotgun pellets, because the little round pieces are about the same size as some seeds and grit that birds eat. Lead fishing weights can be ingested when birds catch fish. Also, species such as loons may ingest the weights because they are similar to stones that they eat to help grind up food in their gizzards.

Although estimates vary on exactly how much lead enters the U.S. environment through shooting and fishing, one conservative tally puts it at 25,000 tons each year. It’s easy to see why. Most bullets, shot and fishing weights used in the U.S. are still lead. No U.S. state has completely banned lead fishing weights, and no state has outlawed lead salt-water fishing gear. And although the percentage of the U.S. population that engages in hunting is shrinking, greater numbers are shooting at targets and clay pigeons—activities that both expose people to lead and pump a lot of lead into nature.

What happens to wildlife with lead poisoning? 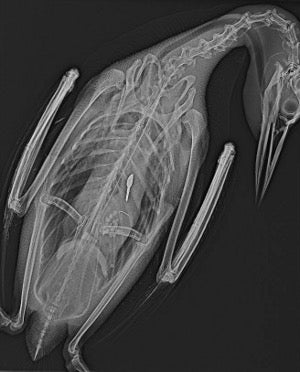 X-ray of a loon with an ingested lead weight. Photo: Courtesy of Mark Pokras
The clinical signs are mostly related to how this heavy metal poisons the neurological system. Although it’s safe to assume most wild animals with lead poisoning die without ever being brought to a veterinary clinic for testing or treatment, Tufts Wildlife Clinic sees a couple of cases of lead poisoning each week. Typically, we receive these cases when someone spots a wild animal that’s unable to stand, bumping into things, and panting as it tries to draw a good breath. The American Bird Conservancy estimates that lead poisoning kills between 10 million and 20 million birds and other animals—including more than 130 species—each year.

Is the idea of banning lead ammunition in our national parks new?

No. People have been debating the issue of lead in wildlife for well over 100 years. George Bird Grinnell first raised the alarm about ducks, geese and swans dying from lead poisoning in 1894. However, we didn’t see any legislation addressing the millions and millions of birds dying from lead poisoning until almost a century later. In 1991, the United States passed a federal law prohibiting the use of lead shot for hunting waterfowl, because of the risk of lead poisoning to federally protected migratory birds, especially bald eagles.

The just-overturned federal ban was hardly a novel concept. Canada has banned the use of lead in national park lands and wildlife refuges since 1997, and it nationally eliminated lead for hunting waterfowl in 1999.

Are there alternatives to lead sporting products?

Many nontoxic options exist for fishing gear, which can be made from ceramic, steel, tungsten, tin composites, natural stones and even recycled plastic bottles. Replacing lead bullets also is not a difficult technological fix. The Department of Defense is working hard to develop non-lead bullets, because the government has spent tens of millions of dollars to clean up lead contamination in the soil and water. And it turns out that an awful lot of police and law enforcement personnel get low levels of lead poisoning from exposure at shooting ranges.

When the 1991 law passed, the sporting community worried that nontoxic ammunition either wouldn’t work as well for hunting, or that the replacements for lead would be so much harder that they would actually damage guns. Neither problem has turned out to be a major issue.

Nontoxic alternatives do cost slightly more, but economic studies have shown that they increase the average sportsperson’s annual expenses by less than 1 percent.

So where is the opposition coming from?

Manufacturers prefer to make bullets from lead because it’s a pretty cheap metal to acquire, and it has that low melting point, which makes it easy and inexpensive to work with. Most other materials will cost the manufacturers more.  But the outlets that sell ammunition and fishing gear—both tiny bait shops and large sporting chains—argue that they put lead alternatives out on their shelves, and the non-lead stuff doesn’t sell well.  There is no doubt that improvements in education and marketing are needed.

And unfortunately, one of the biggest opponents is the National Rifle Association, which has invested heavily in opposing measures to eliminate lead ammunition. The NRA appears convinced that the lead issue offers a toehold for the government to begin regulating or even limiting the Second Amendment, and that once lawmakers get a handle on the lead issue, they’ll want to limit gun owners’ activities in other ways. But this is just not the case. We simply want to protect the health of people, animals and the environment.

Is limiting lead in the environment worth the political effort? Have we seen any results from the existing U.S. and state laws?

Absolutely. Fewer waterfowl and eagles are dying from lead, and there are some signs that lead poisoning in loons may be starting to decrease. But there is still a lot to do.