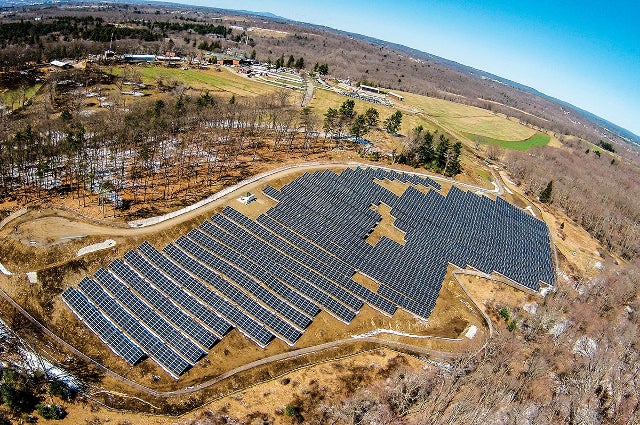 Two new solar installations on Tufts’ Grafton campus will generate 40 percent of Cummings School’s electric power and are expected to save the university up to $5.3 million over the next 20 years.

The installations cost the university nothing, said Betsy Isenstein, who is managing the project for Tufts’ operations division. The arrays are owned, operated and maintained by NRG Energy through an agreement negotiated by PowerOptions, a 500-member energy consortium that helps nonprofits consolidate their energy buying.

“We spend about 60 percent less for solar-generated power than we do to purchase electricity from National Grid,” Isenstein said. The solar installations, the largest allowed by existing regulations, will be supplemented with power from National Grid. NRG retains the Renewable Energy Credits (RECs) for Cummings School’s installations.

The installations sit on eight acres south of the Bernice Barbour Wildlife Medicine Building and on four acres east of Grafton Science Park, a research and office complex on the western edge of campus near the Grafton commuter rail station.

The solar project supports the sustainability goals championed by Tufts President Anthony P. Monaco, who has made the reduction of energy consumption, greenhouse gases, water use and waste a priority of his administration.

The Grafton installations, the largest at Tufts, won’t be the last, Isenstein said. The university is assessing solar potential on its Medford/Somerville campus, in addition to taking advantage of the photovoltaic system that was installed in 2014 on the roof of Dowling Hall, which houses a variety of student and administrative services as well as a parking garage.

Russian Oil and Western Sanctions Against the Ukraine Invasion

With Gas Prices and Power Blackouts on the Rise, Is Green Technology the Solution?