A Market for Change 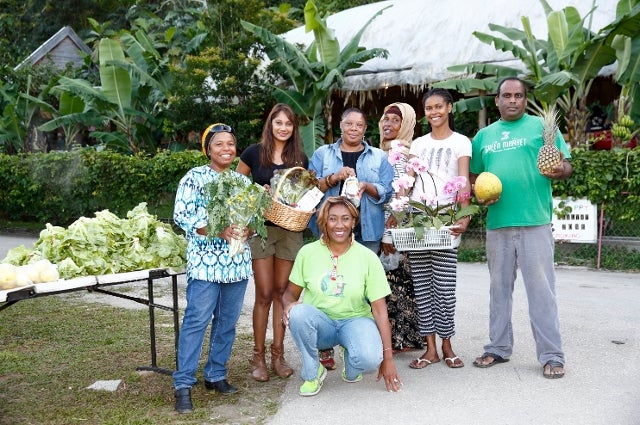 Traditional agriculture has lost ground in Trinidad and Tobago, a two-island Caribbean nation with an economy fueled by reserves of oil and natural gas. Despite the warm climate and fertile soils, former cocoa plantations and small farms have been cleared for residential developments and most food is imported, often in heavily processed forms.

Vicki Assevero, F10, wants to change that. So she came up with a homegrown alternative—opening the Green Market Santa Cruz in 2012 on a five-acre farm that she owns with her husband, Wendell Mottley, an economist who is a native of Trinidad and Tobago.

Assevero, an American-born attorney, aims to connect island residents with local farmers and boost regional food production. “Our goal is to change patterns of consumption,” she said. She also wants to support farmers who grow food without harmful chemicals.

The market is located in Santa Cruz Valley, a 20-minute drive from the capital city, Port of Spain. Once a week, local vendors and farmers come to the market to sell vegetables such as collards, Swiss chard and broccoli, as well as guavas, passion fruit, citrus and bananas. Shoppers can also pick up herbs, cut flowers, prepared foods, lotions and soaps and even jewelry. Residents can buy into a community-supported agriculture program (CSA) that the market started in 2014, offering a share of each week’s bounty and giving the farmers an infusion of cash early in the growing season.

To house the market and related programs such as cooking demonstrations, talks and workshops, Assevero and Mottley built thatch-roofed structures and an old-style cocoa house, giving several buildings Creole names in a nod to the island’s history. On two acres of the farm, Assevero grows fruit and avocadoes and raises chickens for eggs.

In her former professional life, Assevero worked for a law firm representing multinational corporations doing business in West Africa and lobbied for developing nations before the U.S. Congress. She got the idea for the market when she represented the New York City Bar Association’s International Environmental Committee at Rio + 20, the U.N.’s 2012 summit on sustainable development. Assevero thought the gathering was inspiring, but short on practical projects.

“The goals are so lofty, but how do you do it?” she said. “You have to start at the local level.”

She and Mottley have maintained a home in Trinidad and Tobago even when work took them elsewhere, and fruit from the trees on their old farm was going to waste. Assevero met with neighbors to discuss options, eventually convening an advisory board to form the market, which now employs five people full-time and five part-time. Each week, about 50 vendors participate, paying rent for their spaces, and about 650 area residents come to eat, learn and buy.

While Assevero runs the market like a social enterprise, it is a for-profit business, which breaks even because she volunteers her time as executive director, doing everything from booking vendors to training staff and collecting eggs. “Farming is seven days a week,” she said.

Growing up in Washington, D.C., Assevero didn’t know much about where her food came from, and her education at Yale and Harvard Law School didn’t improve matters. She recalled with a laugh how, as a young woman, she once tried to return a chicken to a shop in France because its head and feet were still attached. (“You don’t have a knife?” the incredulous shopkeeper asked her.)

Now the market’s weekend talks and workshops, on topics like the role of bees in pollinating crops and how to plant an organic garden in row boxes, fuel her passion for local agriculture. Last year, the market was featured in a report by the U.N. Environment Programme as an example of private sector and community-based social entrepreneurship that promotes healthier and more sustainable local consumption.

“The Green Market is an experiment that asks, can we rethink agriculture to reduce dependence on foreign imports while simultaneously intensifying and networking smaller scale but highly productive agroecology?” Assevero said. “I am hoping that our experiment proves that we can change a community’s collective consciousness and consequently change unsustainable patterns of production and consumption.”