The Fight Against Goat Plague 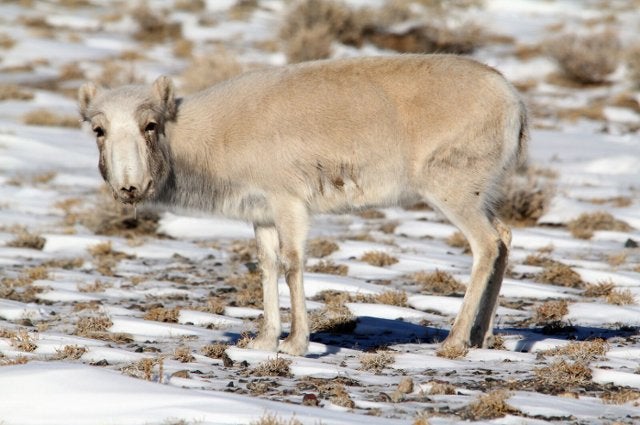 An endangered subspecies of antelope that roamed the earth at the same time as woolly mammoths now hovers on the brink of extinction as a disease that normally affects sheep and goats decimates its population.

International researchers are rushing to vaccinate and restrict the movement of domestic goats and sheep in Mongolia in hopes of containing the highly contagious virus, likely transmitted via infected livestock sharing the antelopes’ grazing grounds. If they fail, PPR could threaten a number of other wild species, including the last of the wild Bactrian camels, located in southern Mongolia.

PPR has long been the bane of some of the world’s poorest people. When Cummings School epidemiologist and professor Jeffrey Mariner, V87, and his collaborators analyzed PPR in 2015, they found that the disease cost sheep and goat herders around the world at least $1.5 billion annually—and that spending an estimated $3.1 billion on eradication efforts could wipe the virus off the planet.

Inspired by those findings, the UN Food and Agriculture Organization and the World Organization for Animal Health acted swiftly, launching a global program in 2016 to eliminate PPR by 2030.

Now, Mariner—a key player in the international program that eradicated rinderpest, a cattle plague—is undertaking a $2.5 million project, funded by the U.S. Agency for International Development, in which Tufts and University of Florida researchers will test new strategies for PPR control in Uganda.

It is nasty. “PPR is a Morbillivirus virus, which is related to measles in children and distemper in dogs. Infected animals—be they domestic goats and sheep or their wild cousins—first develop a high fever and, within a couple days, severe diarrhea and sores in their eyes and mouth. These animals have a lot of puss around their eyes and nose. Their eyes glue shut, and their breath smells awful because the tissues on the surface of their lips and inside their mouths die of necrosis.”

It is devastating to animals. “PPR infection usually ends up killing 70 to 90 percent of the animals in a herd. Baby and young animals usually succumb to the disease because of dehydration and nutrition loss resulting from the severe diarrhea. More mature animals may recover from the diarrhea, but often develop a secondary bacterial pneumonia that can last for weeks and often prove fatal. And the virus can do great harm if it spreads from livestock to an endangered species, given that these populations usually exist in very small ecosystems and may represent the last few thousand animals of their species left in any part of the world.”

It cannot spread to humans, but it is devastating for people. “PPR is not contagious to humans from animals. But it has enormous effects on human economics and food security. The communities where you find affected sheep and goats depend on these animals for milk, meat and income. And in the developing world, sheep and goats are much more marketable than cattle. For poorer farmers, small ruminants are often the gateway to a bigger farm, and women are more likely to use small ruminant farming than cattle as a means to self-sufficiency. Around the world, the overall mortality in livestock from PPR might only be 2 percent, but if your household loses 70 percent of your herd to PPR—that’s almost impossible to recover from.”

It could go the way of smallpox. “PPR’s closest relative is rinderpest, a cattle disease that was eradicated in 2011—making it the second disease, after smallpox, to be completely wiped off the earth. And PPR is a good candidate for eradication, thanks to its many similarities to rinderpest. These viruses don’t survive well in the environment, and infected animals either succumb to PPR or recover and remain immune for life. That means that the disease always has to find new susceptible hosts. When populations of new hosts are small, the virus will die of its own accord after an outbreak. There are good vaccines that provide lifelong immunity and protection against all strains of PPR and good diagnostics to use in the field. And similar to Tufts’ role in helping eradicate rinderpest, we have created new formulations of the existing vaccines that can be used in the field for months at a time without refrigeration.”

It requires vaccinating smarter, not harder. “It is much more important to study the disease and then take a surgical approach to attacking it than to vaccinate all the sheep and goats in a country. For example, with rinderpest, we convinced Ethiopia to stop trying to vaccinate all cattle and to instead focus on the few areas that were driving the problem. Once they finally started targeting the right cows, Ethiopia wiped out rinderpest within a year or two—after decades of unsuccessfully trying. There also are some differences with PPR that present new challenges. For starters, there are about twice as many sheep and goats as there are cattle in the developing world, and they are sold or slaughtered much more frequently. Lots of animals often changing hands means our eradication plans have to be even better than they were for rinderpest. But we think we can cope with that.”