On the Trail of Boston’s Black History

Inspired by a beloved professor, an interactive map catalogs African-American historical sites at Tufts and nearby 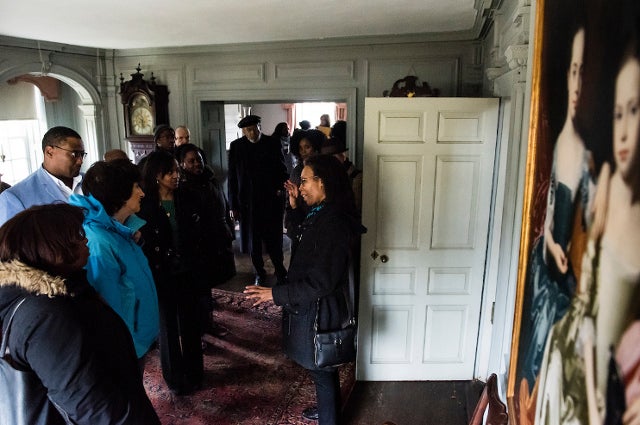 Many years ago, Pearl Robinson, an associate professor of political science, was rushing to class on the Medford campus when she bumped into her colleague Gerald Gill. Gill, a history professor, mentioned that he had been putting together an informal tour of places on campus that illustrate the African-American experience at Tufts. If she had time, he said, he would give her the tour.

But that day never came, she said. In 2007, the beloved history professor who had taught at Tufts for 27 years died suddenly. Robinson said she still regrets missing the chance to take that stroll around campus with Gill, a scholar of the 20th-century history of black Boston and the civil rights movement. “Gerald being Gerald, there would have been history in the presentation of every site,” she said.

But a couple years ago, a dedicated group at the school began working to finish and expand upon the work Gill started. With Robinson’s help, Kendra Field, director of the Center for the Study of Race and Democracy (CSRD); Katrina Moore, director of the Africana Center; and Dan Santamaria, director of Tufts Digital Collections and Archives, pieced together the Tufts tour Gill might have given.

Then last year, Field and her CSRD colleague Kerri Greenidge, who was teaching a course on black Boston, saw a way to partner with historical sites to take the tour a step further and benefit a larger audience. Thanks to a wide-ranging collaboration among CSRD, Africana Studies, the Africana Center, the Data Lab's GIS Specialist Carolyn Talmadge, Tufts Digital Collections and Archives, and other Tufts faculty, students, staff and alumni, the African American Freedom Trail Project at Tufts recently launched an interactive web map that documents black history sites throughout Greater Boston. Some 115 sites are currently listed, but the organizers said that is just the beginning.

“It’s an evolving learning resource,” said Field, who is also an assistant professor of history and Africana studies. “If you want to suggest a site you can submit your idea and it will be reviewed and potentially added. Public schools could do a project to, say, go out and find new sites to possibly add to the map.”

Here are just a handful of the many sites included on the map: 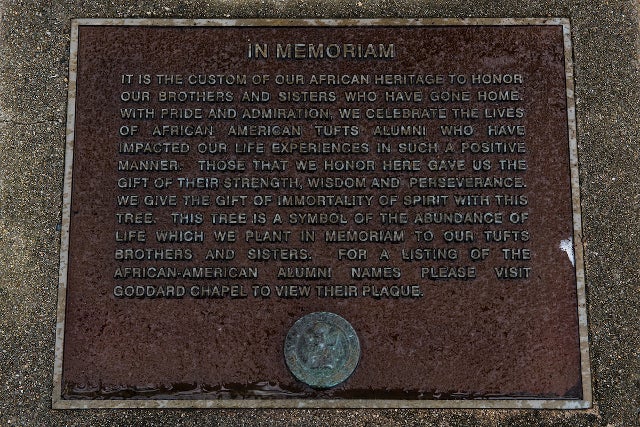 Photo: Alonso Nichols
This young beech tree was planted by Gill and several alumni in 2001 as a memorial to African-American students at Tufts. “Those that we honor here gave us the gift of their strength, wisdom and perseverance,” reads a nearby plaque. Students of African descent have been present at Tufts since the 1890s, when Charles Steward, the son of a missionary, enrolled in the dental school. One of the earliest black graduates was Forrester Washington, Class of 1909, who became dean of the Atlanta University School of Social Work and served as a member of the “black Cabinet” in Franklin D. Roosevelt’s administration. Madeline Bernard was the first African-American woman identified as a graduate of Jackson College, in 1920. She had a long career in public service. A plaque in Goddard Chapel lists many of the names of other African-American students. 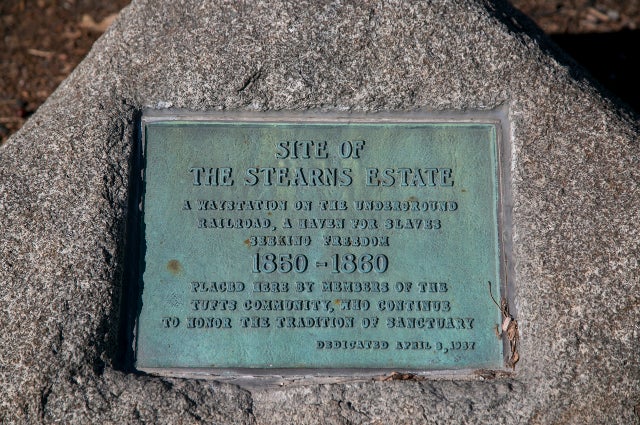 Photo: Kelvin Ma
A large stone with a green copper plaque in front of Cousens Gym marks what was once an important stop on the Underground Railroad, a network of safe houses and secret routes that enslaved women and men used to escape to free states in the North and to Canada between 1850 and 1860. George Luther Stearns (1809-1867) was a wealthy industrialist and merchant who lived in an estate on College Avenue. He was an abolitionist, and provided financial support to a variety of anti-slavery causes. One of those was William Talbot, a Southern fugitive who in 1856 hid for weeks in Stearns’ estate before he eventually continued on to Canada.

As part of the Secret Six group, Stearns helped aid John Brown in his raid at Harpers Ferry in West Virginia, seeking to spark an insurrection. A bust of John Brown was recently rediscovered at Tufts, and is being restored.

In 1737, Isaac Royall Jr. brought 27 enslaved women and men from his plantation in Antigua to this Medford estate. Near the opulent main house, a small building where some of them lived is the only structure of its kind still standing in the northern United States. The simple structure has been modified over the years—stairs to replace a ladder, for example—but it is still a stark contrast to the papered walls and carved woodwork of the great house.

Enslaved men, women and children also lived in the nooks of the main house. When Royall died in 1739, detailed probate documents gave an accounting of all the items in the house, including “negro beds” in the kitchen, kitchen chamber and attic. Others most likely lived close to their work on the 500-acre farm, perhaps in barn lofts or boathouses, now lost. Census and probate records have preserved the names of more than 60 men, women and children enslaved by the Royalls.

Although not much is known about the lives of the slaves who lived in Medford, reminders of the work they were forced to do remain. On nearby Grove Street, a piece of decorative wall that marked the entrance to the Brooks Estate still stands; it was built in 1765 by an enslaved man named Pomp. And the Salem Street Burying Ground, the oldest cemetery in Medford, contains a large section that is believed to hold the remains of 50 enslaved people.

In 1969, a Tufts student noticed that all the union contractors working on the construction of what would become Lewis Hall appeared to be white. That news spread and led to protests by Tufts students as they sought to call attention to unequal hiring practices by the Volpe Construction Company. According to the Tufts Observer, about 200 students from Tufts and other universities gathered at the site on Nov. 5 that year, causing work to stop. After sit-ins at Ballou and East halls, the demonstrators and the university administration reached an agreement that led to two black bricklayers joining the project. Eventually Tufts filed a lawsuit against the construction company for its non-compliance with federal law in equal opportunity hiring.

The African American Freedom Trail Project map lists many other famous protest sites, including the Parkman Bandstand on Boston Common, where Martin Luther King Jr. spoke to a crowd of 22,000 as part of a city-wide protest against segregated housing and segregated public schools in 1965. Also close to Tufts’ Boston campus, the Tremont Theatre was the scene of a 1915 mass protest by black Bostonians who opposed the glaring racism in the film The Birth of a Nation.

Over the years, a number of African-American students at Tufts have hailed from West Medford, where generations of black families have grown up in a tight-knit community. This historic community began in the late 19th century with the Northern migration of freed people from the South after the Civil War. For more than 80 years, the West Medford Community Center has been a cornerstone of the neighborhood.

“I learned how to make model airplanes here, and how to make spaghetti,” said Terry Carter, a lifelong resident and now the center’s director of elder services. Today, the center is also a repository of oral histories and photographs of the entrepreneurs, church leaders, craftsmen, activists, judges and firefighters who broke barriers. Many of their stories were collected by Rosalind Shaw, a Tufts associate professor of anthropology, and Brandeis professor Mark Auslander and their students in 2005 and 2006.