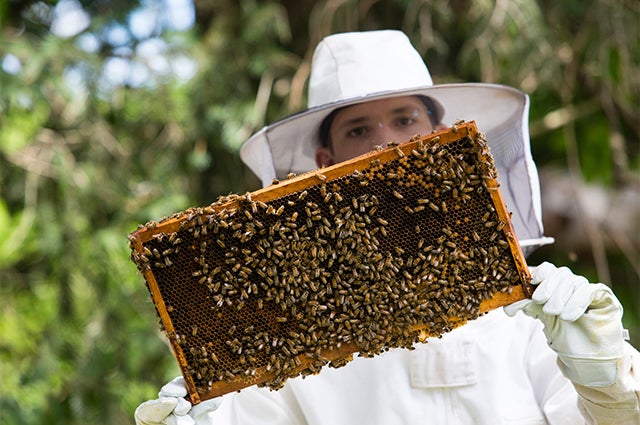 Rachael Bonoan and I approach nine honey bee hives on Cummings School’s Grafton campus, covered from head to toe in heavy bee suits. One bee after another begins to buzz the mesh veil protecting our faces. I break into a sweat, not from being encased in canvas on a hot summer afternoon, but rather from a bit of bee-induced panic.

But Bonoan, a Tufts Ph.D. candidate in biology, is unperturbed, as she goes about gently taking the top off the hive and filling it with smoke she pours from a kettle. She leisurely begins removing the frames inside the hive, one by one, to inspect each rectangle’s wax comb for signs of healthy reproduction: bee eggs, just-hatched larvae that look like tiny grubs, velvet-looking little hexagons (cells in the comb where the grubs have been capped over in wax to incubate until they’re ready for prime time), and fuzzy young bees that have just chewed their way out of the wax to make room for the next round of babies. “It’s all about knowing the bees, really,” says Bonoan. “I didn’t get stung at all last year.” 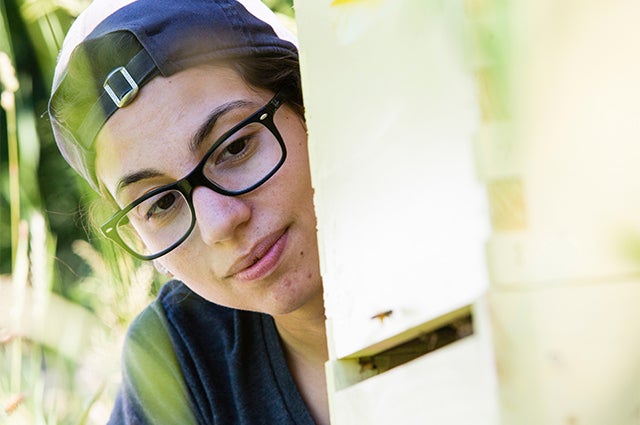 Rachael Bonoan, a Tufts Ph.D. candidate in biology, is raising bees on different diets to see how they fare when introduced to health threats. Photo: Anna Miller

Though certainly savvy about working at “bee speed,” Bonoan, G18, tells me that there’s much she still wants to learn about how nutrition affects these highly social insects.

She hopes her research may help honey bees and other bees, which are responsible for pollinating a third of the crops consumed by Americans. Their numbers have declined at an alarming rate—half of all honey bee colonies, which should exist in perpetuity, have been wiped out since the 1950s. Possible causes include chemicals and pesticides, diseases caused by fungi, viruses and bacteria, stress from being trucked all over the country to pollinate crops, and—Bonoan’s special area of interest—nutritional deficiencies caused by pollinating large amounts of a single type of crop.

Research has shown that a more diverse diet leads to stronger baseline immunity in honey bees, notes Bonoan, but no one knows to what extent that affects their susceptibility to various diseases. To answer this question, she is raising bees on different diets at Cummings School to see how they fare when introduced to health threats.

“One diet is made up of just the proteins bees get from dandelions, which is ecologically relevant because in early spring that’s all they have to eat. This limited diet is also representative of commercial agriculture, because bees are forced to feed on mono-floral diets made up of whatever crops they’re pollinating,” explains Bonoan. The other diet has all the proteins bees need. Bonoan and her research interns visit each week to shake this food directly into the frames inside each hive, and the bees eat and store the powder the same way they would grains of pollen. The entrances to the research hives have been narrowed to knock pollen pellets off returning bees’ legs, so the insects can’t supplement their assigned diets via foraging.

Once six weeks has passed—an entire lifespan of a honey bee in the summer—Bonoan says she will have sets of bees that have been raised exclusively on either the limited-protein or the complete-protein diet. She will collect some worker bees from each set to test if their immune strength differs when challenged with Nosema, a fungal disease known to cause serious losses of adult bees and colonies. (To ensure no other bees bring this back to their hives, these tests will be conducted in a laboratory.) Other bees from the two groups will be transported to the Medford/Somerville campus where they will face a different challenge: exposure to chalkbrood, a fungal pathogen that’s usually about as dangerous to bees as the common cold is to most people.

“If the hive is healthy, bees can fight chalkbrood off pretty quickly,” says Bonoan. If not, “the fungus grows out from the baby bees’ bellies and penetrates their tissues, turning them into little mummies that look like chalk.” Honeybees battle the heat-sensitive pathogen by vibrating their thoracic muscles to raise the temperature of the hive—essentially generating a fever response that kills the chalkbrood off.

“They do that through muscle contractions, and protein is pretty important for muscle development,” says Bonoan. “We will use thermal imaging on the observation hives to see if the protein in the two diets seems to affect the strength of this response. We assume it will, but the great thing about science is who knows what we will ultimately find?”

As Bonoan dictates the hive number and hive findings into her digital recorder, the hum of buzzing bees escalates until it’s as loud as the sound of a whirring weed whacker. Bees swirl in a dark cloud around Bonoan, making her look a bit like Pig-Pen from the Peanuts cartoons. “I know. You’re upset,” she coos to her subjects, pointing out to me how they are now stress-eating their honey. After one fond last look inside, she closes up the hive. “I’ve always loved insects,” notes Bonoan. “If you told my child self that I could have a job playing with bugs, I never would have believed it.”

The Secret Life of Bees 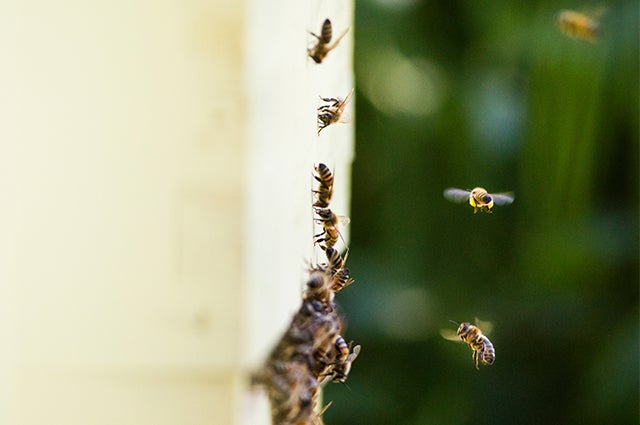 Half of all honey bee colonies, which should exist in perpetuity, have been wiped out since the 1950s. Photo: Anna Miller

Rachael Bonoan, a Tufts Ph.D. candidate in biology studying honey bee nutrition and the president of the Boston Area Beekeepers Association, shares some  insights into our little black-and-yellow friends.

Girl Powered. Hives are almost entirely female—and all of them are sisters, except the queen bee, who is their mother. “They have way more females because they’re the ones doing all the work.”

Femme Fatalities. Female honey bees are the ones that can sting you—the stinger is a modified egg-laying organ. They die after they sting, “so if they can avoid it, they will.” (The same is not true of hornets and wasps.)

Shaggy, Baby. You can tell young bees from old by how fuzzy they look. “Honey bees are born with all their hair, and lose it as they grow up.”

Being a Grown Up Is Hard. The youngest, just-hatched members of the hive enjoy the safest job: keeping the brood—the bee babies—at just the right temperature and feeding them via a bath of pollen and bee spit. The oldest bees take on the riskiest job—foraging for pollen to bring back to the hive—because they’re nearing the end of their lives.

Going Bananas. Bee keepers use smoke to keep the hive members as calm as possible. “It works by blocking their chemical signaling, so upset bees can’t tell the other bees to get upset, too.” The alarm pheromone, which the smoke interferes with, smells like fake banana scent to us.