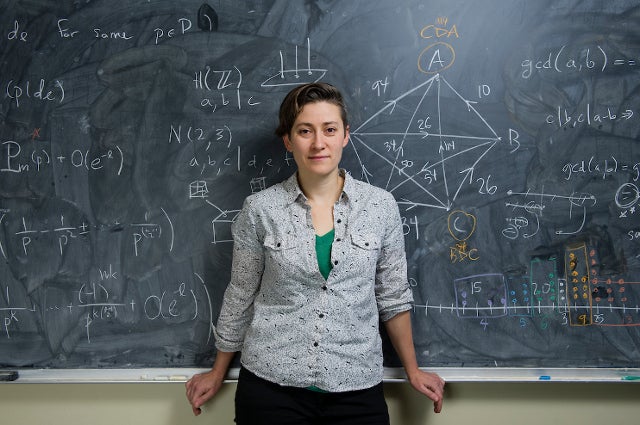 The esoteric world of pure math doesn’t usually play much of a role in promoting fairness in the U.S. political system, but Tufts mathematicians Moon Duchin and Mira Bernstein believe that needs to change. It is math, they say, that could help overcome gerrymandering—the practice of drawing legislative districts that favor one party, class or race. And a workshop convening all around the Medford/Somerville campus this week could persuade others that they’re right.

The workshop, sponsored by Tisch College and running from today through Friday, is a project of the Metric Geometry and Gerrymandering Group (MGGG). The group was started by Duchin, an associate professor of mathematics and a Tisch senior fellow. MGGG’s goal is to bring mathematicians together with experts in law, politics and voting rights as we head into the 2020 census. The results of the census will be used in 2021 to redraw the current legislative districts, a process known as redistricting.

“This workshop was motivated by our sense that the mathematics of redistricting could use a reboot, with more contemporary ideas from the topology and geometry of data in the mix,” said Duchin.

The process of holding politicians accountable for creating fair districts begins with determining what a fair district shape actually looks like. Many states require districts to be compact, but there is no agreed-upon definition of what “compact” means. “People have an intuitive understanding that ‘compact’ means nicely shaped and doesn’t look like an octopus,” said Bernstein, an MGGG member who is a visiting assistant professor in the interdisciplinary program in Science, Technology, and Society. But what does such a district look like in the real world? This is where math can help: Duchin’s pure math research can be used to measure how compact a district is. Quantitative experts can also build tools that allow the public to compare redistricting proposals and even draw up their own.

“What we’re trying to do in the long term is build a huge community that has the tools to get involved in 2021,” said Bernstein. “You will need people with the tools to hold politicians accountable.”

The first three days of the workshop will be open to the public and are aimed at people with some background in math, statistics or computer science. The final two days are by application only, and will be split into three tracks: one that will focus on helping high school and college math and computer science educators and curriculum developers raise awareness of the problem of gerrymandering; one that will train Ph.D. scholars from quantitative disciplines to be expert witnesses in gerrymandering court cases; and one that will feature 16 software developers, data scientists and machine learning specialists collaborating, hackathon-style, to design software in cooperation with the Public Mapping Project, which is another effort to make redistricting more fair and transparent.

The Boston workshop is the first of five that are planned for cities around the country. Future workshops will take place in Madison, Wisconsin (registration is currently open), Durham, North Carolina, Austin, Texas, and San Francisco. Wisconsin was selected because of a major partisan gerrymandering lawsuit that was filed there, Gill v. Whitford, which has gone to the Supreme Court. Justice Ruth Bader Ginsburg has said that it could be the most important case the court hears next term.

MGGG received more than 1,000 applications for the specialized tracks of the Boston workshop, and more than 1,700 people have registered for the group’s skills and interests inventory, which the group plans to use to call on quantitative experts when their specific skills are needed in the future.

“We’ve had just a tremendous, tremendous response,” says Bernstein, which makes her hopeful that math combined with political tools will deliver a potent one-two punch against gerrymandering.