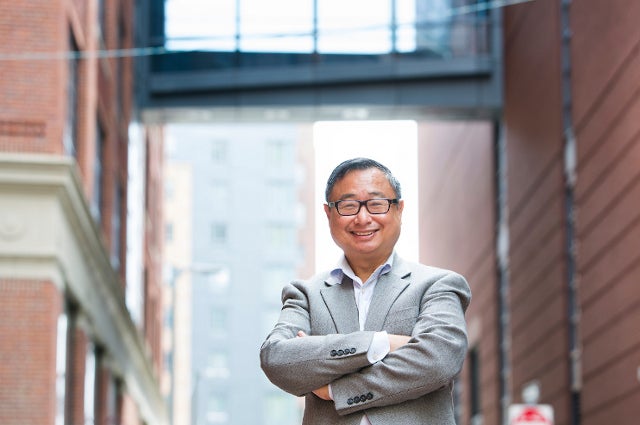 Daniel Jay, new dean of the Graduate School of Biomedical Sciences at Tufts University School of Medicine, has carried around the same periodic table since eighth grade.

“From a very early age, I had an interest in chemistry,” Jay said, as he pulled the tattered artifact from his wallet. “The periodic table is a way that nature can be ordered, so that means there is an underlying mechanism—this was important to my thinking as an adolescent.”

Today, Jay’s mission for the school is to train other young scientists toward career excellence in academia and across the biomedical workforce. About 20 percent of the school’s trainees go on to academic positions and “we need to train the other 80 percent to find their passions and give them the tools they need to compete, excel and lead,” Jay said.

To that end, the school will provide more opportunities for multidisciplinary education, experiential learning and networking, and help students sharpen communication, presentation, team-building and other skills useful in a corporate environment, he added.

“We are excited about Dan’s arrival in the dean’s office,” said Ira Herman, School of Medicine professor and director of the Cell, Molecular and Developmental Biology program at the Graduate School of Biomedical Sciences. “A consummate and creative collaborator, Dan is a devoted mentor and an internationally recognized innovator in the biomedical sciences.”

Jay grew up in Toronto, earned his bachelor’s degree from the University of Toronto and then headed to Harvard University in the early 1980s for his Ph.D. and postdoctoral training. He was an associate professor at Harvard before joining the Tufts faculty in 1998. His research has focused on identifying proteins on cancer cells that are important in invasion of neighboring tissue, which could lead to the development of anti-metastasis drugs.

He has published more than 80 papers and mentored more than 60 graduate students, postdoctoral scholars and undergraduates in his lab, and will continue this work as dean. “I believe very strongly in mentoring and doing so to permit each person to reach their potential,” he said.

At Tufts, he’s chaired and served on several committees and task forces; most recently he directed the postdoctoral affairs office at the School of Medicine. Jay was also a co-director of the school’s National Institutes of Health-funded Post-Baccalaureate Research Program, which offers training for graduates from underserved communities who are interested in pursuing a research career.

“Dan has a fresh perspective on how to best equip students to enter the biomedical workplace, and we are eager to watch him flourish in this role,” said Harris Berman, dean of the School of Medicine. “He is a man of many interests and brings real enthusiasm to the school.” 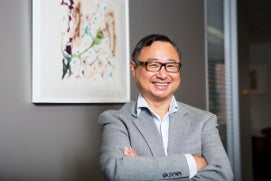 “I feel truly blessed that I have two passions in my life—art and science—and that not only can I do both but I can combine them,” said Dan Jay. Photo: Anna Miller

One of these interests is art—Jay is also an adjunct professor of drawing and painting at the School of the Museum of Fine Arts at Tufts. The son of a grocer, he grew up sketching on butcher paper at the back of his family’s market. Jay’s first solo show was three decades ago, and for the last five years, his work has explored the intersection of art and science. “I have a scientist’s mind and an artist’s eye in the same head,” he said.

Jay’s art is often inspired by travel. Among recent projects are depictions of Tufts’ Talloires campus and environs made with dyes used by 18th-century chemist and Tallories native Claude Louis Berthollet—the works are currently on display at the Hirsh Health Sciences Library. He also created drawings of the Silk Road in Kyrgyzstan and Uzbekistan, which will be transformed into projection slides layered with colored silk protein by a 3D printer—a collaboration with Tufts engineering professor Fiorenzo Omenetto.

Some of Jay’s abstract art has even incorporated sulfur, magnesium, barium and other elements from his beloved periodic table; selections from that work were displayed at the Tufts University Art Gallery in 2014.

“There is something important at the interface of art and science that can benefit both fields, whether it is creativity, thinking outside the box or problem solving and experimentation,” he said. “I feel truly blessed that I have two passions in my life—art and science—and that not only can I do both but I can combine them.”

Tufts Researchers Investigate How Sepsis Can Result in Cell Death