President Trump is wrong to end protections for those brought to the U.S. as minors, Tufts declares 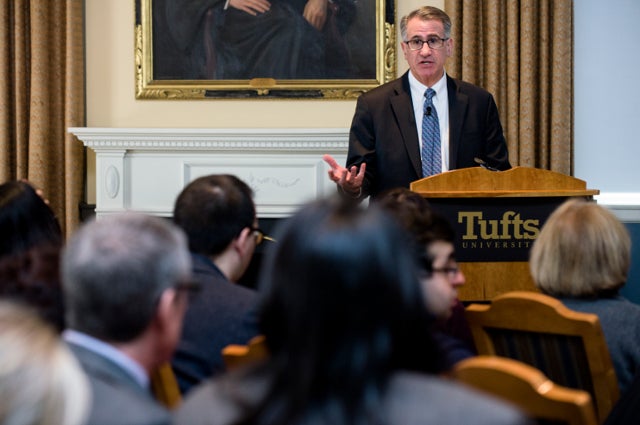 Since former President Barack Obama authorized DACA by executive order in 2012, more than 800,000 young people who arrived in the U.S. as children have received permission to work, drive, open bank accounts, buy homes and attend college in the U.S. without fear of deportation for the immediate future.

On Sept. 5, Trump ordered an end to the program and told Congress to pass a replacement before he starts phasing it out in six months. Those enrolled in DACA remain protected until their permits expire, and those whose permits expire within the next six months are eligible to renew them, but new applications are no longer being accepted.

“Tufts strongly opposes terminating DACA, and I promise that we will continue to advocate in court and with elected leaders to communicate our unwavering support of the program,” President Anthony Monaco said in a statement to the Tufts community.

Healey and 15 other state attorneys general have brought a lawsuit against Trump over the plan to unwind DACA. The suit charges that it would harm the Massachusetts economy, the fabric of local communities, and the educational mission of academic institutions.

It would also harm the 25-plus DACA students at Tufts, according to a declaration Tufts submitted for the attorney general’s lawsuit.

“DACA and undocumented students have often overcome enormous challenges to study at Tufts. They can be proud of their accomplishments, and we are grateful for their contributions to the university community,” Monaco said. “We will continue to honor our commitment to our DACA and undocumented students, providing them with our unequivocal support so they can receive the quality education that they well deserve.”