A Citizen of the World

After an international career, Abi Williams, F86, F87, returns to Tufts to become director of the Institute for Global Leadership 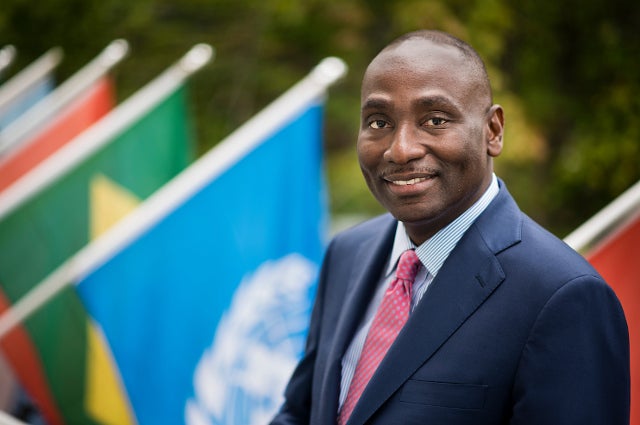 When Abi Williams, F86, F87, was a student at the Fletcher School, he took part in the newly created Institute for Global Leadership’s inaugural program. Now, more than three decades later, Williams has returned to the institute after a career with the United Nations and other international organizations—this time as director.

The institute, known as IGL, “combines rigorous academic training with experiential education,” said Williams. It encompasses many programs, the best known being Education for Public Inquiry and International Citizenship (EPIIC), a year-long course open to Tufts undergraduate and graduate students culminating in a student-organized symposium.

Williams took part in the first EPIIC course, on international terrorism, and will lead this year’s course, focused on the question “Is the Liberal World Order Ending?” The course’s title “underlines the point that IGL is about questioning, interrogating major issues of global importance,” said Williams, who is also a professor of the practice of international politics at the Fletcher School.

“I’m always interested in the application of ideas to solve practical problems,” Williams said in his office in IGL’s home, a wood-frame house on Packard Avenue. “I’ve worked on issues at the critical intersection of peace, security, and justice, which is something I’d like to see IGL doing.”

Williams is nothing if not a global citizen. He grew up in Sierra Leone, and as a teenager went to the Lester B. Pearson United World College in British Columbia before as an undergraduate attending Edinburgh University, where he earned a master’s degree. He then came to the Fletcher School, receiving an M.A.L.D. in 1986 and a Ph.D. in 1987.

Doctorate in hand, he taught at Georgetown University’s School of Foreign Service. Soon he was practicing what he was teaching, joining United Nations peacekeeping missions in Macedonia, Haiti, and Bosnia. Those experiences made a mark on his way of thinking about the world, in particular about conflict prevention—a better investment, he thinks, than conflict resolution.

Most times, he said, the UN will deploy peacekeepers after conflict has erupted. But in Macedonia, UN officials tried a different approach—making efforts to stop war from breaking out. “It underlined to me that there is a strong moral reason why we should pay more attention to conflict prevention, because you are saving human lives,” he said.

After working in the field, Williams served as director of strategic planning for UN secretaries general Ban Ki-Moon and Kofi Annan before heading to the United States Institute of Peace, where he led its efforts in Pakistan, Iraq, Afghanistan, Libya, and Tunisia. At home pretty much anywhere in the world, he moved to Europe in 2013 to become founding president of The Hague Institute for Global Justice, which he calls “a think-and-do tank.”

Watch a video as Abi Williams talks with Fletcher School Dean James Stravidis about his career.

Throughout his career, Williams kept his ties with IGL and Tufts. While at the Hague Institute, he established an internship for IGL students to come to the Netherlands to do research on conflict prevention, rule of law, or global governance. That wasn’t anything new: he had provided research opportunities for IGL students at the UN and the U.S. Institute of Peace, too.

Now at IGL, he’s got a lot to manage. In addition to EPIIC, the institute offers some 25 other programs, such as Inquiry, in which Tufts students mentor high school students from major cities around the country and host a global issues simulation on campus. And then there is the ALLIES program, dedicated to improving civilian-military relations by bringing students from the military academies to campus for exchanges, and BUILD, a student-led program dedicated to immersing students in the theory and implementation of sustainable initiatives.

“One of my priorities is to look at all of this and ask: what do we keep, what do we consolidate, what do we end?” Williams said. He is, he said, working to create “IGL 2.0.”

In his new office this summer, Williams quoted T.S. Eliot’s Four Quartets to convey what it feels like to be back in Boston after all these years: “We shall not cease from exploration / And the end of all our exploring / Will be to arrive where we started / and know the place for the first time.”

“I have a new appreciation for the poem,” Williams said. “This is a homecoming for me.”