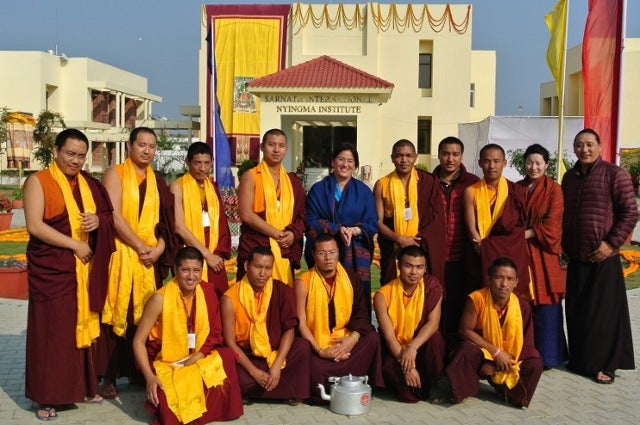 As the American-born daughter of a French-Egyptian poet and a Tibetan Buddhist spiritual leader, Tsering Gellek, F00, grew up bridging cultures—and she hasn’t stopped. In fact, building connections between East and West is central to her latest venture, directing an international Buddhist institute in India.

“I’m an apple that didn’t fall too far from my own tree, my own roots,” she said, explaining that her efforts follow those of her father, Tarthang Tulku, who has founded several organizations dedicated to publishing Tibetan Buddhist teachings and sharing them widely.

For her work directing the Sarnath International Nyingma Institute (SINI), as well as her commitment to Buddhist cultural preservation throughout Asia, she is being honored at the Fletcher School on Monday, September 18. Gellek, who is a visiting fellow at the Feinstein International Center at Tufts, will receive the Henry J. Leir Human Security Award at an event in ASEAN Auditorium starting at 6 p.m.

SINI first opened its doors in 2013, in the city of Sarnath, India, where the Buddha is said to have first shared his teachings. About 20 Tibetan Buddhist monastics currently take part in a comprehensive three-year program at the institute, in which they continue their monastic practices while studying English. They also explore topics such as climate change and business ethics in seminars with visiting students and scholars from very different walks of life.

“They’re not just learning the ABCs,” said Gellek, who splits her time between India and her home base in California. “They’re learning about human rights, democracy, environmental issues.”

The monastics serve as advanced teachers in the Tibetan Buddhist tradition—Gellek said they have “the equivalent of a Ph.D.”—but many have had limited exposure to other fields of study. The institute helps them learn to share their traditions in English and consider, in conversations with lay people, how those ancient teachings may be relevant to modern-day problems.

It also offers language programs in Sanskrit, Pali, and Tibetan, three classical Buddhist languages, to strengthen the study and practice of Buddhism. SINI is funded by private donations and provides scholarships to monastics selected to participate.

Before directing SINI, Gellek organized the restoration of the Swayambhu stupa, located near Kathmandu, Nepal. The renovation of the religious structure, which is believed to be about 1,500 years old, involved 70 artists and more than 40 pounds of gold were used to gild the dome. The project was completed in 2010, after two years of work.

Beyond the practical need for historic preservation, the effort had symbolic value. “According to the Buddhist perspective, stupas are repositories of blessings and virtues,” Gellek explained. “When you work on one, you revitalize that aspect for the community and the world.” Since 2001, Gellek has also overseen the installation of large peace bells at significant Buddhist holy sites throughout India and Nepal.

While her current efforts focus on the Tibetan Buddhist community in exile, when Gellek graduated from Fletcher she worked with refugees in Africa. Getting to know others who had been forced to leave their native countries helped her understand her own family’s experience, she said.

In exile from his homeland of Tibet, her father is a leader in Tibetan Buddhism’s Nyingma tradition, which includes teachers who are not celibate monastics. In his 10 years in India and close to 50 years in the United States, he has focused on preserving and sharing Buddhist traditions and helping Tibetans in exile. Gellek is the youngest of his three daughters, each of whom carries on his work in her own way.

At SINI, Gellek aims to forge connections and inspire creative thinking about how Buddhist teaching can help address today’s pressing problems. “We are building bridges not just between cultures and people, but between different periods of time,” she said. “We’re considering the traditional as it applies to the modern day, on a practical level.”