Shared Mistrust in the Middle East 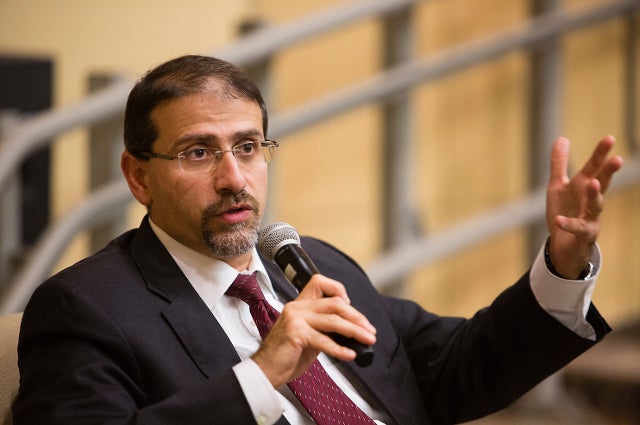 Daniel Shapiro, who served as U.S. ambassador to Israel from 2011 to 2017, is a firm believer in working toward separate, sovereign states for Israel and Palestine. “There is no better solution—maybe no other solution—than a two-state solution,” he told a crowd at the Cabot Intercultural Center at the Fletcher School on September 14.

“I still believe that this is achievable objective,” he said. “But I do believe it is getting harder.”

Shapiro said that rounds of failed negotiations, punctuated by periods of violence and terror, have produced a “serious and heavy weight of doubt” among the people in the region, where “a kind of disillusionment and despair has set in.”

“We are faced with leaderships that completely mistrust each other, that do not invest in each other as partners to try to achieve a shared objective,” he said. “They rather position themselves for the other side’s failure, and then make sure the blame falls on the other side when the negotiations fail.”

Shapiro spoke with David Harris, Tufts’ provost and senior vice president, about public service, America’s role in the Middle East and current foreign affairs as part of the Tisch College of Civic Life’s Distinguished Speaker Series. Prior to being named ambassador by President Barack Obama, Shapiro was senior director for the Middle East and North Africa on the National Security Council.

He acknowledged that it could be frustrating to work with parties that seem to have little sense of mutual self-interest. “Win-win is a very American concept that often I find we have trouble even explaining the logic of,” he said. “It’s not specific to Israelis or Palestinians. I find for both that things often get reduced to zero sum.”

Future leadership among Palestinians is causing uncertainty. The question of who will succeed Mahmoud Abbas, 82, who was elected Palestine president in 2005, is “the biggest black box in the Middle East,” Shapiro said. When asked by an audience member how the United States could help ensure that the next leader is more open to discussion, Shapiro was circumspect about “putting a thumb on the scale.”

“Could we be effective? There’s a different question of, should we try?” he asked. “A lot of times it doesn’t work out; a lot of times it actually backfires on us. I’m very humble about our ability to pick winners, or if it’s even appropriate to do so.”

Asked about Obama’s sometimes contentious relationship with Israeli Prime Minister Benjamin Netanyahu, Shapiro said that while the leaders had well-known disagreements about settlement expansion and the Iran nuclear deal, they were able to strengthen the U.S.-Israeli partnership in many ways, including security assistance, intelligence cooperation, and technology development.

Those things “didn’t happen in spite of them, they happened because of them,” he said of the two leaders. “The relationship is a lot more complex than it is sometimes characterized.”

The former ambassador, who is now a senior visiting fellow at the Institute for National Security Studies in Tel Aviv, shared some advice for aspiring diplomats. Asked by a student how to best work in a region when you don’t know the language, he recalled a misstep that happened shortly after the United States invaded Iraq in 2003.

Fewer American envoys spoke Arabic then, so when a handful of Iraqi political figures who knew English presented themselves, the Americans were more likely to listen to them and follow their advice, which wasn’t necessarily to the benefit of U.S. interests.

“It’s important to know our own limitations, and then push ourselves through whatever tools we have . . . to touch and hear from the broadest cross-section of the societies we are working with,” said Shapiro, who speaks both Hebrew and Arabic.

He also warned students that while social media has allowed diplomats to reach out directly to people as well as their governments, Twitter and Facebook should be used with care. The risk, he said, is pointed out most prominently by President Donald Trump, whose tweets “confuse our adversaries and confuse our friends.” Foreign policy is too complex for 140 characters, he said.