Exploring the Boundaries of Biological Science 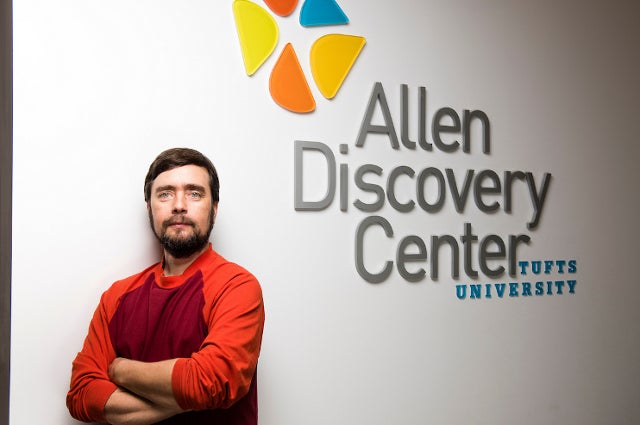 Eight researchers in the vanguard of biological science gathered at the inaugural symposium of the new Allen Discovery Center at Tufts University today to explore new frontiers within the dark matter of biology.

The day-long symposium, which attracted guest speakers from leading research institutions such as Tufts, Harvard University, Massachusetts Institute of Technology, and Jackson Labs, was expected to draw about 300 attendees.

The event marks the opening of dedicated lab space in the university’s newly-constructed Science and Engineering Complex for the Allen Discovery Center at Tufts, directed by Michael Levin,  The Paul G. Allen Frontiers Group  awarded Tufts and Levin a $10 million grant last year, part of a new initiative from the Frontiers Group to promote transformational advances in human knowledge with patient, long-term investments in teams of scientists pursuing out-of-the-box approaches.

Levin’s work attempting to crack the bioelectric code that dictates body plan and permits the reprogramming of cells could one day contribute to the regeneration of limbs and organs and repair of birth defects and cancer.

“There are already adult complex organisms such as flatworms, salamanders and other creatures that repair almost every organ in their body after traumatic damage. I believe there is no fundamental reason why human medicine couldn’t achieve this as well, and that the radical regeneration of the human body is going to be possible at some point in the future,” said Levin, Vannevar Bush Professor of Biology in the School of Arts & Sciences and director of the Allen Discovery Center at Tufts.

Levin said the foundation’s support is enabling him to expand and accelerate his research by assembling the tools and talent needed to push boundaries. “I want to be doing research that no one else can do,” he said.

Learn more about what Michael Levin hopes to achieve in his research.

Levin’s team of researchers and collaborators has made remarkable discoveries in recent years, learning how bioelectricity regulates the body plan,  regenerating limbs,  preventing and normalizing tumors by using light to control cell electric signals, transplanting functional eyes onto the tales of tadpoles, understanding the impact of space travel on body plan regeneration by sending worms into space, and using artificial intelligence  to learn about the biophysics of cancer.

The goal is to understand how cells make decisions about building a complex body, knowing which organs to build when, how big and what shape they should be, where to build them, how they should be placed in relation to each other, and when to stop building them, according to Levin.

“We’ve learned that there is a really important layer of bioelectrical controls that acts like software running on the genome-specified cellular hardware within cells and tissues. And we’ve learned how to target those electric signals to reprogram how an organism develops – without having to edit the genome. We’re cracking the bioelectric code, which has implications for regeneration, cancer, and birth defects, and although there is still much to investigate, we’re learning more every day.”

The symposium was followed by a panel discussion involving Levin and two of his co-investigators in the Allen Discovery Center, David Kaplan  and Jessica Whited. Also participating was Tom Skalak, executive director of The Paul G. Allen Frontiers Group.

The symposium featured presentations by other prominent researchers, including: