A Focus on Humanitarian Efforts 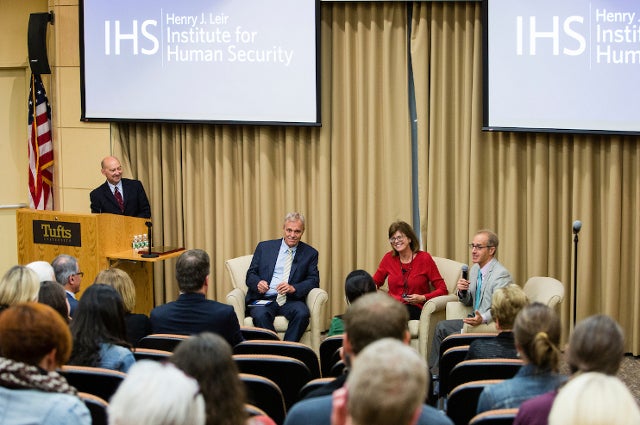 President Anthony Monaco said the institute’s mission “reflects and honors Henry Leir’s deep commitment to relieving human suffering and advancing peace and prosperity. Leir was always keenly interested in examining the political, economic, and social problems of his time, and in envisioning solutions that would improve human well-being and create greater worldwide prosperity through economic and political cooperation.”

The institute, he said, has emerged as “a leading center of excellence, known for its cutting-edge research, education, and policy engagement in addressing global challenges with a focus on the well-being of all human beings.”

Leir’s connection with Tufts began in the mid-1970s, when his friend Jean Mayer became president of Tufts. “These two European expatriates shared the qualities of keen intellect and passionate vision, and Leir became a staunch supporter of Mayer’s vision for Tufts,” said Monaco. Leir’s philanthropy benefited, among others, the Fletcher School, the Friedman School of Nutrition Science and Policy, and the Tufts European Center in Talloires, France.

After Leir died in 1998, the Leir Charitable Foundations carried on his humanitarian vision for world prosperity and peace. It has supported the institute and its growth since it was founded in 2000. Subsequent gifts brought world-class scholars to Tufts.

Human security, said James Stavridis, F83, F84, dean of the Fletcher School, encompasses those factors that “attack the human condition,” including poverty, violent conflict, pandemics, famine, and migration. That broad domain, by necessity, “brings together in one discipline and in one center a chance to truly improve the human condition,” he said. Of particular importance, he said, is the intellectual vigor that comes with four endowed professorships. “For schools the size of Fletcher and Friedman, this is a truly significant contribution.”

Dariush Mozaffarian, dean of the Friedman School, emphasized the institute’s role as a catalyst for groundbreaking research and scholarship, and pragmatic solutions. Moderating a conversation with the Maxwell and Jacobsen, Mozaffarian noted how the center “is about deconstructing science, coming up with the answers, training future leaders and really going out and making a difference.”

Jacobsen, whose research with the Refugees in Towns project seeks to better understand how to integrate migrating populations into urban centers, called migration a “long-standing part of our history,” noting that the percentage of people who are migrating has not changed dramatically. A hundred years ago, she said, the percentage of world’s population that was migrating was around 2.9 percent; today it is 3.3 percent. And migration is not only happening in Europe. “Migration is affecting our entire globe.”

Maxwell spoke about how four countries are now on the brink of famine: South Sudan, Nigeria, Somalia, and Yemen. Tens of millions of lives are at risk of starvation, he said. This threat poses a big question—why has famine, once thought to be a crisis of the past, re-emerged?

To answer that question, he said, you must look beyond the hunger for deeper factors. For these four countries, the common thread is conflict. “We have to think of conflict management and resolution as a key component of dealing with famine,” he said. And that means confronting the challenge of “competing imperatives.”

“When you have a security imperative and a humanitarian imperative, the humanitarian imperative rarely trumps the security imperative,” Maxwell said. “If we recognize that these situations are protracted and long-lasting, we need to think better about how we work in them. .  .  . We have got to take a much more holistic view of crises to get away from a narrow focus on technical issues, and think much more broadly about the politics of food scarcity.”