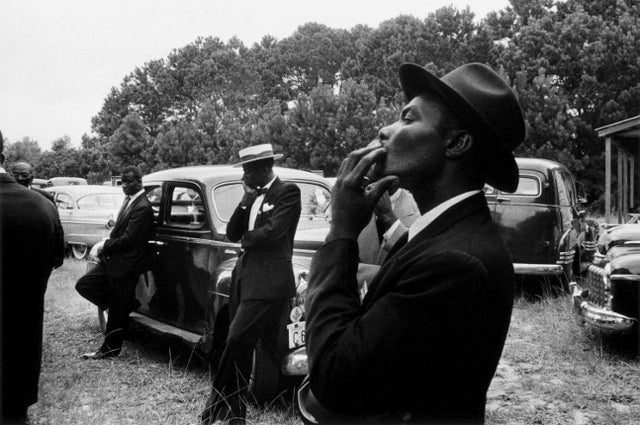 The work of legendary photographer and filmmaker Robert Frank is coming to Tisch Library from October 6 to November 5, in a pop-up exhibition on its way around the world.

Titled Robert Frank Books and Films: 1947-2017, and featuring selections from Frank’s entire artistic body of work, the exhibition was conceived and designed by Frank and his publisher, Gerhard Steidl. Tisch will be the only Boston-area stop for the tour, which will include 50 universities, art schools, museums, and nonprofit spaces worldwide.

“We are very excited about this unique event, and the opportunity it presents to deepen the connection between Tufts and the art and photography communities,” said Dorothy Meaney, interim Tisch Library director. “We look forward to bringing people to campus and showcasing Tisch Library.”

The exhibition will include unframed prints of Frank’s photographs, interspersed with material from his books and films, on banners that will be destroyed after the exhibition, as requested by Frank. “The exhibition is unique in that it’s specifically created for each space. Students, faculty, staff, and visitors will encounter Frank’s books and films in our lobby, hallways, café, and even a stairwell,” Meaney said.

This is the first time the exhibition will appear in a library, Meaney said. “It will provide viewers an intimate experience of this work, in the context of a place where they come to connect with ideas,” she said.

Born in Zurich, Switzerland, in 1924, Frank began studying photography in 1941 and worked for commercial photography and graphic design studios in Zurich, Geneva, and Basel. In 1947, he came to the United States, where he worked in fashion, journalism and advertising, and took street photos of people prominent in the New York art scene.

Frank is best known for his book The Americans, published in the U.S. in 1959. It is a collection of 83 photos, from many different cities and strata of society, that he took while traveling across the country in 1955 and 1956  thanks to a Guggenheim Fellowship.

“Once rejected for its pessimism, now sanctified for its political prescience, the book distills heartache, anger, fear, loneliness, and occasional joy into a brew that has changed flavor with time but stayed potent,” Holland Cotter wrote in the New York Times in 2009 on the occasion of The Americans’ 50th anniversary exhibition at the Metropolitan Museum of Art.

Frank later shifted his focus to film, directing many, including the 1959 work Pull My Daisy, which Jack Kerouac adapted based on the third act of his play Beat Generation.

Events related to the exhibition at Tisch Library kick off with a public lecture by Steidl on Thursday, October 5 from 6 to 8 p.m. in Cohen Auditorium, called “Print Is Not Dead: The Beauty of Analogue Media in the Digital World.” The lecture will include Steidl’s thoughts on the potential and limitations of the analogue and digital worlds; the differences between printed and e-books; his role model, Johannes Gutenberg; and the way Steidl books come to life. The following afternoon, Steidl will offer a master class to about a dozen participants who will be chosen by the School of the Museum of Fine Arts at Tufts.

“Steidl’s intention is to highlight Frank’s groundbreaking aesthetic, particularly for younger generations,” Meaney said. “A primary goal for us is to have students engage with Frank’s work.”

Events will conclude with a panel discussion Saturday, October 14 from 12:30 to 2 p.m. in Hirsh Reading Room at the library. The panel will be moderated by Dina Deitsch, director of University Art Galleries, and panelists will include SMFA faculty members Jim Dow and Bill Burke, as well as Karen Haas, Lane Collection Curator of Photographs at the Museum of Fine Arts.

The exhibition is made possible by the support of Steve Tisch, A71, and the Steve Tisch Foundation.