A Fighter for Algerian Independence

Zohra Drif spoke at Tufts about her role in the Algerian War in the 1950s, and how that struggle remains relevant today 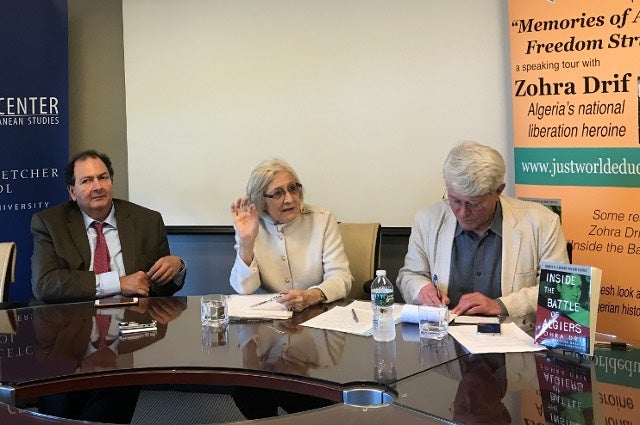 Shortly after turning 22, Zohra Drif confronted the leader of the Algerian independence movement’s National Liberation Front (FLN) about his decision to order an eight-day strike. It was early 1957, and the FLN had been a guerrilla warfare campaign for independence from France for three years.

The FLN leader’s answer stayed with her. “The object of the FLN is not military victory, but to oblige France to meet us on a different battlefield—the political battlefield, where they can never win,” Drif recalled him saying. “Never lose sight of what we are.”

Drif never did, she told an audience of about 50 crammed into Fletcher School’s Fares Hall on Oct. 4 for a talk about her memoir, Inside the Battle of Algiers, recently published in English. Hugh Roberts, the Edward Keller Professor of North African and Middle Eastern History, translated for Drif, who spoke in French. 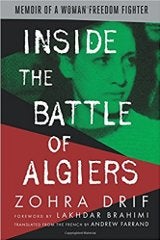 In her memoir, Drif, who was born in 1934 in western Algeria, chronicles her awakening to the differences between herself and the French children she went to school with. “Friendships could be formed that transcended identity and the divide. But soon despite those early friendships, Algerians realized there was an ineradicable difference,” she said through Roberts. “Even if an Algerian pupil was very bright and did well in school, they would never be the equal, socially speaking, of European children.”

Drif went on to study law at the University of Algiers, and to witness France’s surrender to Germany in 1940—an event that made the colonialist French rulers seem vulnerable to overthrow in Algerians’ eyes, she said. As people celebrated Europe’s liberation from Nazism on May 8, 1945—a victory to which Algerian soldiers had contributed—Algerian nationalists demonstrated, declaring that “they were also waiting for their democratic rights to be recognized,” Drif said.

Those demonstrations led to a bloodbath. Thousands were killed throughout Algeria, and leaders of the national movement knew that their nonviolent strategy had to change. The war between the French and the Algerians began in earnest on Nov. 1, 1954, with coordinated attacks across the whole country. “In the past, rebellions had been regionally circumscribed. ‘Across the country’ was massive,” Drif said. “It helped convince the Algerian people that at long last their moment had arrived, and the struggle for independence was engaged.”

As a young woman, Drif joined the armed wing of the FLN to fight the French occupation. She led or supported a number of high-profile attacks on the French, all in retaliation for the murder and torture of her people, she said. Ultimately she was captured by the French and condemned to 20 years of forced labor for terrorism. During five years in prison in Algeria and French, she continued her legal studies and activism. In 1962, when Algeria won independence, she was freed, and was later elected to Algeria’s first National Constituent Assembly.

She went on to help create an organization for youth orphaned in the liberation struggle, practice as a criminal lawyer in Algiers for several decades, and serve as a senator in Algeria’s Council of the Nation for 15 years. She married Rabah Bitat, a founding architect of the liberation movement, and went on to have three children and five grandchildren.

Asked how her memoir might inspire today’s struggles for independence, Drif said that all such struggles—whether in Morocco and Vietnam during the 1950s and 1960s, or in Palestine today—benefit from solidarity.

“A key element to that success was the understanding that it was necessary to put other differences aside, whether ideological, geographical, or even religious differences,” she said. “If you were part of the Algerian people, you should all unite with one objective and not let other matters divide you.”

And then she added, “That might inspire other struggles elsewhere to get it right.”