The Mathematics of Inequality

Bruce Boghosian runs the numbers and shows that without redistribution of wealth, the rich get richer and everyone else gets poorer 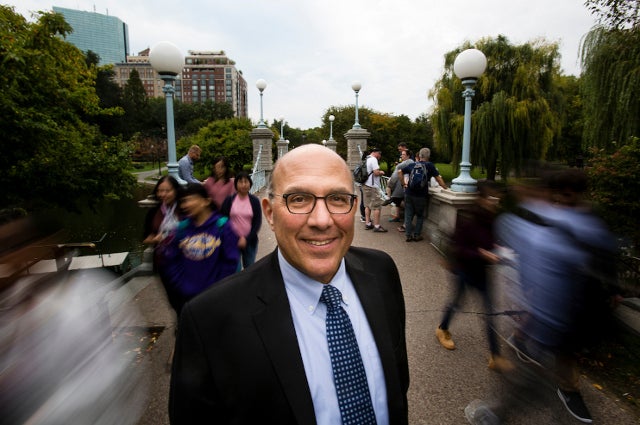 Seven years ago, the combined wealth of 388 billionaires equaled that of the poorest half of humanity, according to Oxfam International. This past January the equation was even more unbalanced: it took only eight billionaires, marking an unmistakable march toward increased concentration of wealth. Today that number has been reduced to five billionaires.

Trying to understand such growing inequality is usually the purview of economists, but Bruce Boghosian, a professor of mathematics, thinks he has found another explanation—and a warning.

Using a mathematical model devised to mimic a simplified version of the free market, he and colleagues are finding that, without redistribution, wealth becomes increasingly more concentrated, and inequality grows until almost all assets are held by an extremely small percent of people.

“Our work refutes the idea that free markets, by virtually leaving people up to their own devices, will be fair,” he said. “Our model, which is able to explain the form of the actual wealth distribution with remarkable accuracy, also shows that free markets cannot be stable without redistribution mechanisms. The reality is precisely the opposite of what so-called ‘market fundamentalists’ would have us believe.”

While economists use math for their models, they seek to show that an economy governed by supply and demand will result in a steady state or equilibrium, while Boghosian’s efforts “don’t try to engineer a supply-demand equilibrium, and we don’t find one,” he said.

Boghosian was first intrigued by this question when he spent four years living in Armenia, starting in 2010, as president of the American University of Armenia. With an unfettered free market after the fall of Soviet rule, he saw Armenia increasingly become a country with a very small number of rich people, and a great number of poor people, he said.

At the same time, Boghosian ran across a description of a mathematical model of market-based exchange, the Yard Sale Model. A simplified version goes something like this: Two people enter into a series of transactions, and both have the same probability of winning some amount of wealth from the other, just as in a free-market transaction. Because people cannot lose what they do not have, the amount of wealth that can be won or lost is constrained to be a fraction of the wealth of the poorer of the two agents.

This is essentially a coin toss, and you might think that in the end both sides would end up with the same amount of wealth. But it turns out those who have more keep getting more. Even if both agents have the same wealth to begin with, one will eventually begin to dominate the other, even though the coin is fair.

Boghosian and his colleagues continued to refine the model, publishing papers on their work in journals such as Physical Review and Physica A. Over time, they added three parameters to the model, he said. “One is for how redistributive the society is, another is for how biased the transactions are in favor of wealthier agents, what we call the wealth-attained advantage, and the third one measures how far ‘underwater’ the poorest agents are,” meaning the extent to which their debts exceed the value of their assets, like real estate.

It’s easy to imagine how wealth-attained advantage works in real life. “The people with that advantage receive better returns on their investments, lower interest rates on loans, and better financial advice,” said Boghosian. “Conversely, as Barbara Ehrenreich famously observed, it is expensive to be poor. If you are working two jobs, you don’t have time to shop for the best bargains. If you can’t afford the security deposit demanded by most landlords, you may end up staying in a motel at inflated prices.”

Stacked in Their Favor

The model tracks the data with remarkable accuracy, he said. He and his team will soon publish a paper on how it relates to U.S. wealth data from 1989 to 2013. “We have also begun to apply it to wealth data from the European Central Bank, and so far it seems to work very well for certain European countries as well,” he said, giving credit to a Summer Scholars student, Chengli Li, A18, who worked with his graduate students, Jie Li and Hongyan Wang, on running the numbers.

It turns out that when agents do well in early transactions, the odds are so increasingly stacked in their favor that—without redistribution from taxes or other wealth-transfer mechanisms—they will get more money, and keep accruing wealth inevitably.

“Without redistribution of wealth, our market economy would not be stable,” said Boghosian. “One person would run away with all the wealth, and it would keep going until it came to complete oligarchy.”

And even if a society does redistribute wealth, if it’s too small an amount, “a partial oligarchy will result,” Boghosian said.

Putting aside ethical issues of growing inequality, it can also create an unhealthy economy, Boghosian said. “That’s because when wealth concentrates and the middle class is depleted too much, you may get very wealthy industrialists, very wealthy manufacturers, but to whom do they sell their products? It locks up the economy,” he said.

Boghosian has been collaborating with economists on these studies too, and two years ago while on sabbatical worked with members of the economics department at the University of Massachusetts at Amherst.

“Bruce’s work on asset exchange pushes the boundaries of conventional economic models,” said Michael Ash, professor of economics there. “In an elegant and straightforward framework, Bruce demonstrates that, contrary to the conventional model, radical inequalities can be rapidly generated from mutually acceptable, apparently equal exchanges—a reasonable approximation of many financial transactions. This is a remarkable and thought-provoking result and may provide insight into the rapid increase in inequality during our highly financialized era.”

Last year, with funding from a Tufts Collaborates grant, Boghosian teamed up with Erin Kelly, associate professor and department chair of philosophy, and Sahar Parsa, an assistant professor of economics, to investigate further implications of the mathematical model.

Boghosian is also exploring his mathematical model’s connection with more well-known economic models, with continuing help from his graduate students. A recent effort, with graduate student Jeremy Marcq, has been trying to understand how the model connects with textbook microeconomics, and especially the Arrow-Debreu theory of general equilibrium, a connection they expect to publish about in the coming months.

He has returned to Armenia, too, working with researchers at the Central Bank of Armenia to obtain data associated with the concentration of wealth during and after the breakup of the Soviet Union, with help from his graduate student Merek Johnson.

Inevitably, some people ask Boghosian about the political implications of his research, but he tries to stay focused on the math. Still, when pressed, he said intervention is necessary.

“If the natural mechanisms of a market economy are such that what seems fair isn’t, and leads to concentration of wealth in the absence of intervention,” he said, “if that’s true, then by the same ethical calculus that outlaws pyramid schemes and justifies consumer protection laws, we need to protect people from the natural inclinations of free-market economics.”

Bruce Boghosian will be offering an online class, Introduction to Wealth Inequality, during the summer of 2018, from May 23 to June 29. More information on the class is available for Tufts students and visiting students.