Overcoming Adversity to Make His Art 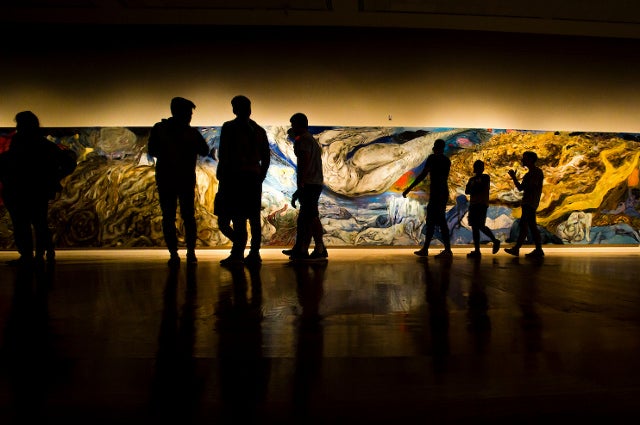 The power of art to overcome adversity is the theme of Chinese artist Yuan Yunsheng’s expansive, scroll-like narrative painting Two Ancient Chinese Tales - Blue + Red + Yellow = White? The painting, commissioned in 1983 during the artist’s six-month residency at Tufts, is on display with other works by Yunsheng at the Tufts University Art Gallery through December 3.

Working in charcoal and acrylic left to right to create the single composition across six canvases, the artist combines two classic Chinese myths in this 9-foot by 74-foot mural. In the first two canvases, he illustrates the apocalyptic tale of demon deity Kung Kung, who unleashes great natural disasters upon the world in an attempt to separate heaven from earth. Over the second two canvases, Yunsheng presents the story of creative goddess Nu Wa, who reawakens life, restores light and order, and across the final two panels inspires a golden age.

Yunsheng, an artist who worked under a series of repressive cultural movements in China throughout much of the twentieth century, intends this narrative to be read as an allegory representing art’s power to overcome societal forces aimed at limiting creative intellectual freedom. Specifically, Kung Kung works here as a metaphor for Mao Zedong, the demon’s destructive energy representing Mao’s  Cultural Revolution. 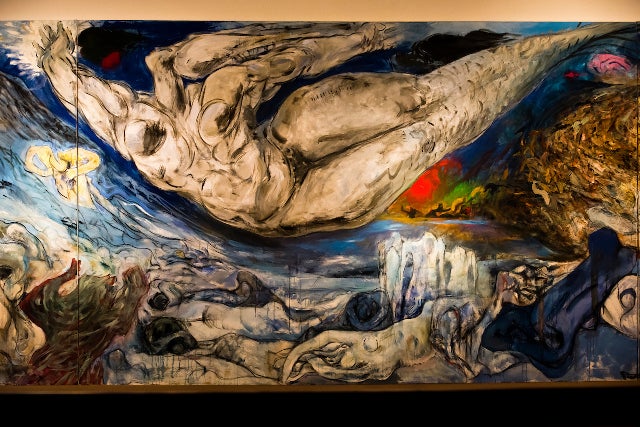 A detail from Yuan Yunsheng’s “Two Ancient Chinese Tales - Blue + Red + Yellow = White?” Photo: Alonso Nichols
Like his epic narrative painting, Yunsheng’s own story is a tale of transcendence. Born in 1937, he began his studies in 1955 at the Central Academy of Fine Arts in Beijing, where he trained in the state-approved style of Social Realism, but an interest the Western style of Post-Impressionism landed him in a labor camp for “re-education.”

He returned to his studies in 1962, only to be condemned as a counterrevolutionary for painting his thesis project in an Expressionist style. Upon graduation, he was essentially exiled to a labor camp, where he taught recreational art classes for 16 years.

But his art continued to flourish, and in 1978, following Mao’s death in 1976, he was appointed to a teaching position at the Central Academy. A year later, the state commissioned him to create a mural for the Beijing International Airport.

But once again, that mural, Water Festival—Song of Life, painted in a style considered Western, was deemed offensive, though this time for its several nude images of female bathers. In the early 1980s, the artist embarked on an extensive tour of the United States, where at last he was able to freely blend his passion for Western-style modern styles with traditional Eastern techniques. It was during that time he came to Tufts, and painted the mural.

“The mural currently on display in the Tufts Art Gallery is one of the finest examples of Yunsheng’s abilities to fuse traditional Chinese techniques into a Western dialogue,” says Dina Deitsch, director and chief curator of Tufts University Art Galleries. “It’s one of his masterpieces.”

The story of the painting itself is one of art overcoming adversity. It hung in a space it was specifically commissioned for in the former Wessel Library, until that building was torn down and replaced by Tisch Library.

“The mural was taken down during construction, but when Tisch Library was finished, they couldn’t accommodate it. It was just too big. So it went into storage,” recalls Laura McDonald, art collections registrar, who was instrumental in bringing the work into its current show. “They kept the sixth panel depicting the golden age on display over the top of the stairs, because they thought it could stand alone as a utopian scene. But, as I like to tell people, that was like hearing the ‘Ode to Joy’ without the first part of Beethoven’s Ninth Symphony. Now the story is complete.”

The Tufts Art Gallery is located at 40 Talbot Avenue on the university’s Medford/Somerville campus. Gallery hours are Tuesday through Sunday, 11 a.m. to 5 p.m., and Thursday until 8 p.m. For more information, visit http://artgallery.tufts.edu.