Fighting Alzheimer’s with Nutrition and Exercise 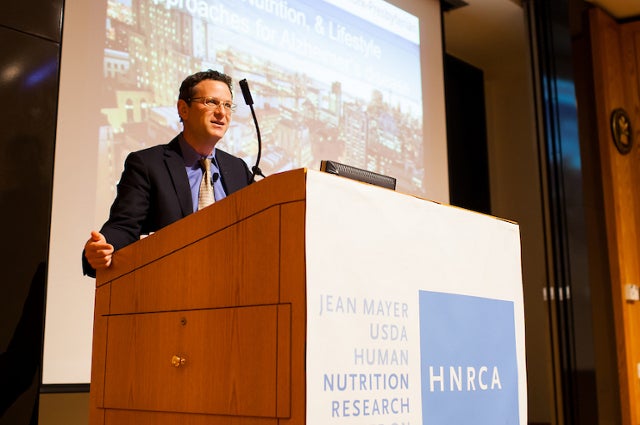 While people may not show symptoms of Alzheimer’s disease until they are in their sixties or seventies, neurological changes begin much earlier.

“Alzheimer’s disease starts in the brain more than twenty years before the first symptom,” said Richard Isaacson, director of the Alzheimer’s Prevention Clinic at New York-Presbyterian/Weill-Cornell Medical Center. “Alzheimer’s disease is not an older person’s disease. It’s a disease of younger and middle-aged people. And that’s how we have to shift the paradigm.”

Looking at Alzheimer’s disease as a lifelong progression is an opportunity, said Isaacson, the keynote speaker at the Drs. Joan and Peter Cohn and Family Lecture on Nutrition, Inflammation and Chronic Disease, held October 12 at the Jean Mayer USDA Human Nutrition Research Center on Aging (HNRCA) at Tufts. In 2013, Isaacson opened the first Alzheimer’s prevention clinic in the country, focusing on nutrition, exercise and other lifestyle interventions that people can begin well before they reach old age.

While some risk factors for dementia—such as age, family history, and history of head trauma—can’t be changed, others can. Isaacson pointed to a report in the journal The Lancet earlier this year that said one in three cases of dementia could be prevented through lifestyle choices. The report identified nine ways to reduce risk: avoiding high blood pressure, obesity, diabetes, and smoking; focusing on education, physical activity, and social contact; and treating hearing loss and depression.

In his introductory remarks, Dennis Steindler, director of the HNRCA’s Neuroscience and Aging Lab, described the “perfect storm” of factors that he believes leads to Alzheimer’s disease, from cosmic radiation that damages brain progenitor cells to abnormal tau proteins that lead to cellular network demise. A person’s genes determine some, but not all, of the factors, he said.

Isaacson agreed. “Genetics is part of the puzzle, but genes are not your destiny,” he said. “You can win the tug of war against your genes.”

Having the ApoE4 gene, for example, increases your risk of developing Alzheimer’s “a little bit,” Isaacson said. But one study has shown that exercise works particularly well in reducing dementia risk in people who have the ApoE4 gene. “This is exciting—this means that even people who are at higher risk potentially may benefit more from these very low-risk and cost effective interventions,” he said.

Watch the video of the 2017 Drs. Joan and Peter Cohn and Family Lecture.

Exercise and nutrition—along with good sleep habits, stress management, cognitive activities, and social engagement—are at the heart of the prevention techniques that Isaacson teaches at his clinic. Weight management, and particularly reduction of visceral fat, are key. “As the belly size increases, the memory center in the brain gets smaller,” he said.

As for what to eat, a Mediterranean-style diet has the most robust scientific evidence behind it for brain health, Isaacson said. Diet patterns such as ketogenic (very-low carbohydrate) and intermittent fasting are promising for Alzheimer’s prevention, but more research is needed; the same with wine, cocoa powder, vitamin D, omega-3 fatty acids, and coffee, he said.

He said he has seen some interventions work better for some people than others, leading him to believe that diets have to work in conjunction with a person’s genetic makeup to prevent dementia. “Precision nutrition is really where I think the field is going to go,” he said.

There is not yet a blockbuster drug or superfood that will prevent Alzheimer’s disease, Isaacson concluded, but until that day comes, his motto is: “Why wait? Intervene now.”