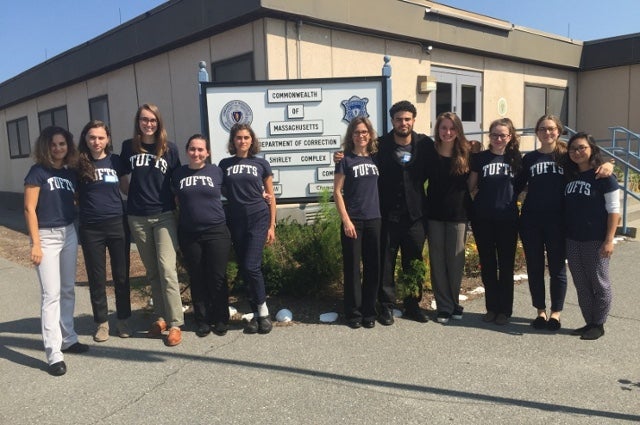 It’s 7 a.m. on a Wednesday, not the usual time for most undergraduates to be up and about. But for students in Hilary Binda’s class Mass Incarceration and the Literature of Confinement, meeting at the crack of dawn in front of the Campus Center is just the first step they take in an uncommon journey. They will pile into a van, eat muffins, and travel west for just under an hour to meet their classmates—inmates at MCI-Shirley, a medium-security prison.

The course is a first for Tufts: ten “outside” students from the university and ten “inside” (incarcerated) students gather weekly to discuss works on a reading list that includes Ibsen’s A Doll’s House, Melville’s Bartleby the Scrivener, and James Baldwin’s short story “Sonny’s Blues.”

While it has elements of a traditional class you might find on the Tufts campus, it’s a conversation that Binda says goes well beyond a discussion of the human struggles conveyed in revered novels and plays. Her vision is that it gives Tufts students a larger understanding of a world they would normally never see.

“This academic experience is a chance to learn firsthand about the effects of mass incarceration and structural inequalities,” she said, “and a way for prisoners and students to encounter each other as equals, often across profound social barriers.”

For Binda, bridging that divide is central to the new Tufts University Prison Initiative at Tisch College, which launched this fall with support from the Office of the Provost. In addition to providing Inside-Out courses, Tufts faculty members will offer two Tufts courses for prisoners for four semesters, starting in fall 2018.

The prison requires background clearances for all Tufts students and faculty members, who also attend a “boundaries training” by the correctional security staff, and participation in the class also requires a faculty-led orientation with pre-course readings at Tufts.

Binda, AG03, developed the proposal while a Tisch Faculty Fellow in 2016-17, but it draws on years of her own firsthand experiences with young incarcerated people feeling profoundly discouraged about their prospects for the future.

She first stepped inside a prison when she was teaching at a Rhode Island high school. Some of her students were cycling in and out of jail, and Binda, taking her concern well beyond the classroom, visited often.

Binda stayed close to one incarcerated young woman, even after leaving to go to Tufts for a Ph.D. in English. She then took a job at the Evergreen State College in Olympia, Washington and returned to Tufts to teach in its Department of Visual and Critical Studies and to direct the writing program at the School of the Museum of Fine Arts.

When her friend was released a little more than a year ago, it got Binda thinking. She wanted to make an impact on the way people in prison are able to envision their lives on the inside and after release, and the best way she knew was through education.

“The liberal arts are about bringing different perspectives together; they’re about inquiry and dialogue,” she said. “Many Tufts students and faculty are concerned about structural injustice and inequality, but many of us also tend to travel in insular circles. The combined class gives both groups an opportunity to learn from one another.”

The educational component of the program builds on curriculum developed by the Philadelphia-based nonprofit Inside-Out Prisoner Exchange Program, which trains faculty who want to adapt the program to their college or university, ensuring secure, safe, and productive relationships with prisons.

Binda said that when word first got out about the course, students jumped at the chance to enroll; it was filled within a matter of days. And so far, she said, the Tufts undergraduates “have been very sensitive and thoughtful, and have found the experience eye opening.”

She noted that in the middle of the first combined class, “one of the men inside said he’d forgotten he was in prison for the two hours of our discussion, which was very moving for all of us to hear,” she said. “The outside students have said that they feel they need to work very hard to match the kind of intellectual energy, effort, and rigor of the inside students. And it’s true: the inside students read very carefully; they are deeply invested in the work and in the conversation—they have said they really value this opportunity and want it to continue.”

The Benefits of Education

Binda received a Tufts Collaborates grant to develop the program; the grant is also funding cross-school research. Binda is working with Carolyn Rubin, assistant professor of public health and community medicine at the School of Medicine, and Jill Weinberg, assistant professor of sociology in the School of Arts and Sciences, on a one-year study involving interviews with formerly incarcerated people who had college experience in prison.

“We’re learning that a college-in-prison program can and should do much more than offer college credit for courses, though that’s an amazing place to start and many people at Tufts have been very helpful in making that happen,” she said. “We know that small or smallish classes and collaborative learning practices are most effective, and that there is tremendous value in the liberal arts experience. Critical thinking and self-reflection, problem-solving and collaboration, not to mention how this changes one’s sense of self, are invaluable for people navigating the prison system from within and once they are out.” She added that a recent RAND Corporation study showed that experience with education while in prison reduces recidivism rates significantly.

Binda is also encouraged by the program’s inaugural lecture. James Forman, Jr., a Yale Law School professor and author of Locking Up Our Own: Crime and Punishment in Black America, on September 21 drew packed audiences to events on both the Health Sciences campus in Boston and on the Medford/Somerville campus. “It was a spectacular turnout,” Binda said. “These are issues that resonate on so many levels—and couldn’t be more timely. I have been especially happy to hear from students with criminal records who want to be part of the initiative.”

The Tufts University Prison Initiative also supports new student tutoring opportunities in many local correctional institutions through involvement with one of its partners, Petey Greene, a nonprofit that works with correctional institutions to help incarcerated people achieve academic goals. This spring, students can pursue internships with Petey Greene or other local criminal justice organizations as part of an internship course Binda is teaching in the Peace and Justice Studies program.

It’s a strong start, and Binda is looking forward to its growth. This spring, the literature course will be offered at the maximum security Souza-Baranowski Correctional Center at MCI-Shirley, and plans are developing for Tufts faculty members to offer a weekly lecture series, Tufts-in-Prison Conversations, at MCI Shirley’s medium-security wing.

Binda’s big-picture goal, though, is sustainability. Once the initial three-year funding runs out, she hopes new funding will pave the way to make it a permanent program at the university. “I feel like I’m really just facilitating something that should be done at a great university like Tufts,” she said. “And there really is nothing more important than thinking about the way that we interact with other people.”