Rebooting the Mathematics Behind Gerrymandering

Those oddly shaped voting districts, usually drawn for the benefit of the party devising them, can be improved 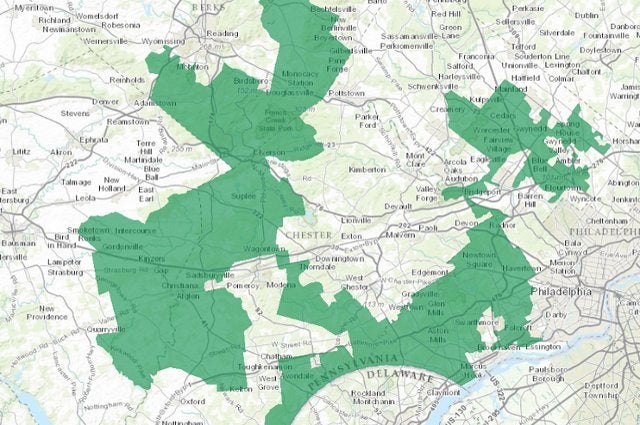 On Oct. 3, the Supreme Court heard oral arguments in a major case about the Wisconsin State Assembly districts.

In the U.S., we elect members to the House of Representatives and to state legislatures in a way that depends heavily on how states are divided into geographical districts. To win, you must simply get more votes than anyone else within your district’s borders. Whoever draws those borders can have a profound effect on the outcome of an election.

In the Wisconsin case, the court is being asked to find—for the first time—a legal framework to control partisan gerrymandering. Their decision could limit the ability of a political party to draw maps to their own advantage.

However, partisan gerrymandering is just one way to rig election maps. With districting cases in contention around the country, citizens and experts alike need to better understand the math of redistricting and the choices involved in drawing electoral maps.

Our group of mathematicians is hosting free public workshops around the country. By improving understanding of the mathematics of redistricting, we hope to empower the public to engage in informed debates about district boundaries and composition. 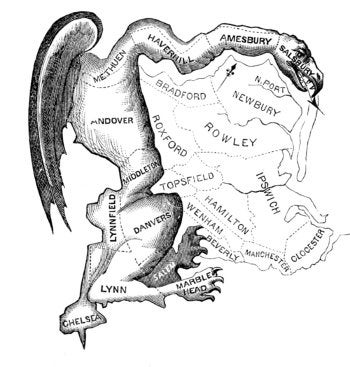 The original Gerrymander. Photo: Wikipedia
The word “gerrymandering” derives from an 1812 political cartoon ridiculing a map drawn under Massachusetts Governor Elbridge Gerry. The cartoon suggested that one district in Boston’s North Shore was shaped like a menacing reptile. (Gerry + Salamander = Gerrymander.)

That district actually isn’t too bad by modern standards, either in terms of shape or demographic sophistication. Early 19th-century politicians lacked the tools of modern gerrymanderers.

Compare that with the current Seventh Congressional District in Pennsylvania, drawn by partisan actors armed with data on every registered voter. The district looks like fractal tumors oozing out from the suburbs of Philadelphia. Its only geometrically tame feature, a circular arc, comes from the Pennsylvania-Delaware state boundary!

But even more troubling than maps like these are those that push an agenda without such flagrant irregularities by, for instance, slicing a city into several pieces in order to dilute the votes of urban dwellers.

Each voter has numerous attributes, such as race, age, wealth and partisan preference. By clumping certain groups of voters together, line-drawers can give one particular group a substantial advantage over its competitors. This way, they might strengthen or weaken the representation of minority groups; protect incumbents or aid challengers; and make primary campaigns more or less likely.

The authorities who control the lines—usually state legislatures, but sometimes nonpartisan commissions or judges—are practicing political geometry, whether they think of it that way or not. They’re carving up the population into pieces, and the shapes of those pieces matter.

What makes a map fair? Since competing values are at stake, there’s no purely mathematical solution.

The Constitution and subsequent court decisions suggest that each district should have very nearly equal populations. Other legally recognized principles tell us that districts should be connected; should try, when possible, to keep political subdivisions (like counties and cities) together; should respect natural geography; and should be “compact,” or not too eccentrically shaped.

Many reasonable people believe that districts should be competitive and follow some guidelines of rough proportionality. In other words, the electoral representation shouldn’t be too out of whack with the state’s partisan breakdown, racial demographics, and so on.

These values often conflict, and no technical analysis could decide which should matter more.

For the first time, technology is catching up to the redistricting problem. Teams of mathematicians, political scientists, and computing experts at Duke and University of Illinois at Urbana-Champaign are building algorithms that can explore the enormous universe of possible districting maps.

These computer samplers generate thousands or millions of alternative maps in a given state. The maps can be used to assess whether a legislature’s proposed plan is an outlier.

If programmers are given specific rules for fair districting, they can then compare a given plan to a pool of valid alternative plans to figure out if its properties are too extreme.

Let’s look at just one possible constraint on plans: compactness.

Compactness is a legally recognized districting principle with a clear geometric flavor. It’s intuitive that districts shouldn’t have shapes that look manipulated or eccentric.

The more degrees of freedom the map-drawer has, the more control he or she exerts over the outcome. The ability to draw wild and wiggly shapes simply gives too much power to the person who wields the pen. Compactness is meant to constrain that.

But what does “compact” mean? At least 30 definitions can be found in the technical literature. Some invoke “isoperimetry,” the idea that a district shouldn’t have a very long boundary relative to its area. Some are based on “convexity,” which means a straight line between two points in the district should stay in the district. Others are based on “dispersion,” or the idea that districts shouldn’t sprawl.

Looking back at Pennsylvania’s Seventh District, you can see that it would fail all of these kinds of tests.

However, most existing definitions look at only the outline of the district on a map. They don’t take into account the “guts” of the district, or how population clusters are lumped together by the line-drawers. A square district that completely encompasses a city is very different from one that splits it right down the middle.

One simple idea is to represent districts as networks, where the nodes are population units like census blocks and the edges represent proximity or similarity. Ideas from discrete geometry may help us reinterpret compactness in a way that is much more relevant to the political realities.

But even with this new framing, compactness will still be in tension with other values. Citizens must consider the trade-offs between all the political ideals in play. Mathematical analysis can help clarify the choices.

Shortly after the Supreme Court heard arguments on partisan gerrymandering, our group convened a conference in Madison, Wisconsin to discuss that case and the national scope of the gerrymandering challenge.

In a few weeks we are headed to Durham, North Carolina for public workshops that will center on the complex ongoing litigation there.

We hope to keep seeing a broad spectrum of people—mathematicians, political scientists, demographers, legal experts, coders, election officials, citizen advocates, and more—coming together to figure out what is fair and how to measure it.

If you’re interested, you can see public talks from our first workshop in August or join us at upcoming workshops around the country.

Moon Duchin is associate professor mathematics in the Tufts School of Arts and Sciences and a senior fellow in the Tisch College of Civic Life.

Peter Levine is associate dean for research and Lincoln Filene Professor at the Tisch College of Civic Life at Tufts.

This article was originally published on The Conversation. Read the original article.