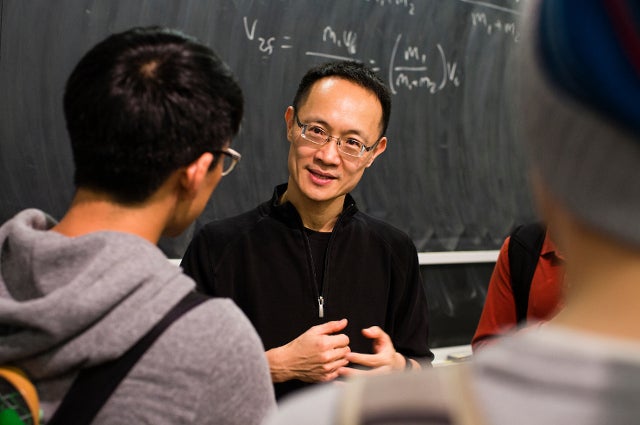 “Startups are very tough—you have to forget about what you have done in the past,” said Bin Lin, co-founder and president of the huge Chinese electronics startup Xiaomi. “The only thing you do as a startup is to survive. It’s very brutal.”

Bin Lin, A17P, A21P, spoke about his experiences at Xiaomi to a standing-room only crowd at the  Engineering Dean’s Lecture on October 26, giving advice about what it takes to succeed in the competitive consumer electronics world.

Lin, who received a master’s degree in computer science from Drexel University, worked for Microsoft for eleven years and then spent four at Google, where he was in charge of building and managing its mobile search and Android app localization teams in Beijing. In 2010, with Google pulling out of China, he and entrepreneur Jun Lei, along with six others, founded Xiaomi. Noting that he was 42 when Xiaomi was founded, Lin told the audience that “it’s never too late to do a startup.”

Xiaomi is an electronic and consumer products company “and one of the fastest-growing technology startups in China,” said School of Engineering Dean Jianmin Qu in his introduction. The company started out small: At first it was only going to develop software, Lin noted. He and his partners didn’t even decide to develop hardware until after the company was started, but went on to release low-cost, high-end smartphones that have become popular in China and have expanded into other markets, such as India; the phones, though, are not sold in the United States.

For people interested in doing startups, Lin emphasized the importance of having co-founders—Xiaomi had eight—and especially those whose skills are complementary to one’s own. Among the eight co-founders of Xiaomi were experts in computer science, design, and hardware.

Flexibility—and listening to customers—are hallmarks of his firm and a key to success, Lin said. When Xiaomi first released MIUI, firmware for its devices that is based on the open-source Android operating system, the company created a system for getting and implementing feedback from users. It started Web forums and invited beta testers. From very small beginnings, the user base grew quickly; now Xiaomi has some 40 million users on its phone forums.

The company pushes updates once a week—every Friday at 5 p.m., and has for seven years. Users give feedback over the weekend, and engineers work on upgrades and implement changes again the next Friday, starting the cycle anew. “With this model, our engineers are always driven by the users,” Lin said. “It’s a powerful, rapid-development model.”

There are two main kinds of innovation, Lin said: that which changes the world (think self-driving cars and spaceships to Mars), and that which changes lifestyles. Xiaomi is focused on the second category, leading Xiaomi far from its smartphone origins. The privately held company now offers a wide range of products, from smart TVs and robotic vacuum cleaners to the Ninebot Mini (imagine a compact  Segway), drones, and fitness trackers. Linking many of the products, Lin said, is sensor technology. “This is a big, big change in the industry,” said Lin. Pointing to robotic vacuum cleaner, for example, he noted that it scans the surrounding area 1,800 times a second, much like self-driving vehicles.

Lin also showcased Xiaomi’s rapid expansion from small startup to international company, highlighting the role social media can play in a startup’s marketing, the importance of selling direct to consumers, and opening brick-and-mortar stores. “There is no better channel for selling your product than selling direct,” Lin said. “It’s hard,” he added, “but I think it’s worth every single effort to make it work.” It’s the most cost-effective way of selling, with a better user experience, “and better profits.”

Xiaomi in English, Lin said, means “little rice,” and on the company’s first official day of business, April 6, 2010, they served rice congee to all the workers in their Spartan rented office space. Now, seven years later, the company makes a “smart rice cooker,” which is linked to users’ smartphones. Buy a bag of rice in China, scan the bar code, and the cooker will adjust for that brand of rice and the user’s softness preference, and make a perfect pot of rice, Lin said.

It’s innovation that won’t change the world, but does change lifestyles, Lin said, like a smart speaker the company has come up with. The difference between theirs and the Amazon Echo, he said to appreciative laughter, is that the Xiaomi offering understands Mandarin Chinese.