Men’s soccer, which has allowed only one goal all season, hosts NESCAC tournament; volleyball, women’s soccer, and sailing in playoff action, too 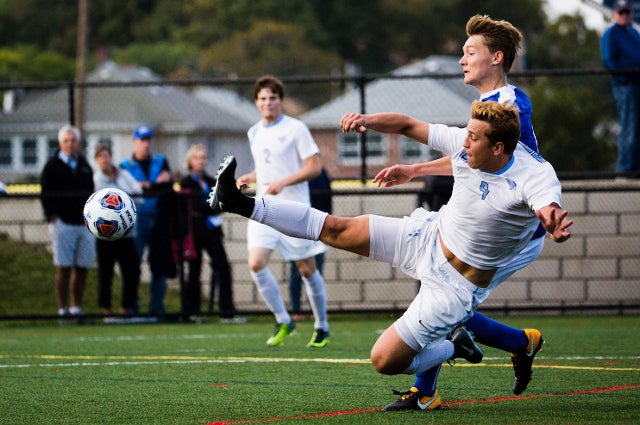 Though the Tufts men’s soccer team has won two of the last three NCAA Division III championships, the Jumbos haven’t had much success in their own conference tournament. The team hopes to change that this weekend.

Tufts will host the New England Small College Athletic Conference (NESCAC) semifinals and final this weekend at Bello Field. The Jumbos face Hamilton College in the first semifinal game on Nov. 4 at 11 a.m. Bowdoin and Middlebury will meet in the second semifinal starting at 1:30 p.m. Saturday’s winners will advance to the conference championship game on Sunday at noon.

The Jumbos’ 3-0 win over Bates at Bello Field in the NESCAC quarterfinals on October 28 was just the second victory in 18 conference tournament games for Tufts. Playing in the semifinal this year for the first time since 2012, Tufts has never won a NESCAC title or even played in a league championship game.

The Jumbos earned the number-one seed in the conference this season with a 7-1-2 NESCAC record. Head coach Josh Shapiro’s team is 13-1-2 overall and ranked fourth in the United Soccer Coaches national poll. Tufts has allowed just one goal in its 16 games for a spectacular 0.06 goals against average. The team’s success has come from multiple factors, including team unity and the depth of their talent.

“We are a family and will fight for each other until the end,” said junior co-captain Sterling Weatherbie, A19. “We hold everyone to a standard and keep each other honest. We know going into the game that everyone will do their job and have each other’s backs.

“We also have 27 guys on our team that, frankly, all have the ability to be starters,” Weatherbie continued. “We don’t have a drop-off level between our first team and our subs. So we are able to continue to come at teams consistently, and not give them a break.”

The Jumbos will look to take advantage of playing on their home turf at Bello for the first time in a conference semifinal. Tufts is undefeated at home this season with a 7-0-2 record.

“It is a huge advantage,” Coleman said. “It is so much fun to be at home. The atmosphere and crowd are unbelievable. Not to mention the field is one of the bigger fields in the league, which allows us to get the ball down and play our game better.” 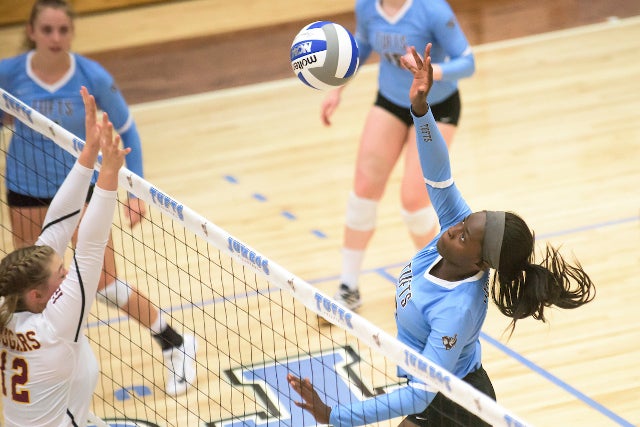 Christina Nwankpa, A20, rips a shot across the net in the match against the University of Minnesota, Morris on September 9. Photo: Alonso Nichols
The Jumbo volleyball team will also be hosting its conference tournament across the street from Bello, at Cousens Gymnasium, November 3-5. Head coach Cora Thompson’s team earned its second straight number-one seed in the NESCAC by finishing 10-0 in the conference this season. Tufts hosts Bates College at Cousens in the quarterfinals on Friday at 5 p.m.

“I am incredibly proud of this group in particular for taking it one point, one set, and one match at a time,” said Coach Cora Thompson. “If there is one thing this group really understands, it’s that there is nothing more important than staying in and owning the present moment. They are all very aware of this program’s history, and they are all very excited for what the future might bring. But they also know that if they look back or look ahead they will lose sight of what's most important, the present moment.” 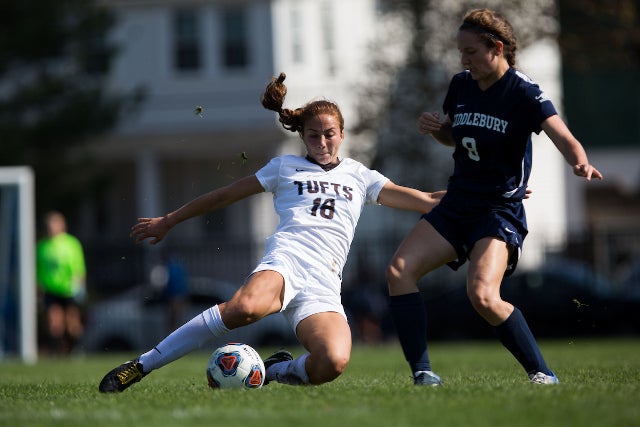 Midfielder Sarah Grubman, A19, attempts to clear the ball during Tufts women’s soccer game against Middlebury on October 7. Photo: Nicholas Pfosi
The women’s soccer team (9-4-3, 6-2-2 NESCAC), enjoying its best season since 2010, will also be in action this weekend. Head coach Martha Whiting’s Jumbos will play in the NESCAC semifinals on Nov. 4 at Williams College. Tufts takes on Hamilton College at 1:30 p.m. on Saturday, with a berth into Sunday’s championship game on the line.

In other championship action this weekend, sailors Alp Rodopman, A19, and Talia Toland, A21, will compete at the Intercollegiate Sailing Association’s singlehanded national championship in Florida. Toland was the runner-up and Rodopman was fourth at the New England singlehanded championships earlier this fall.

Sports Information Director Paul Sweeney can be reached at paul.sweeney@tufts.edu.