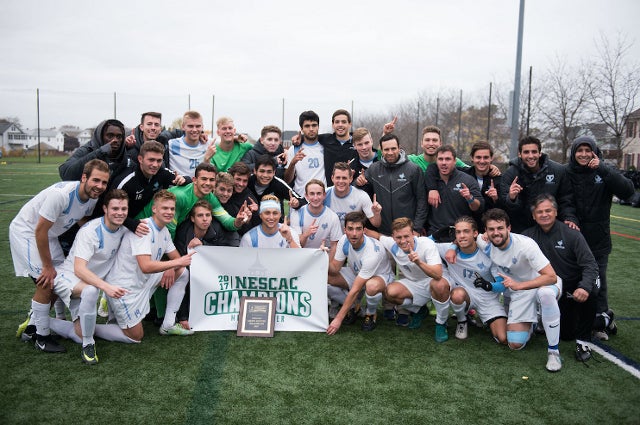 The Tufts men’s soccer team may have won the NCAA Division III championship twice in the last three years, but one trophy had long eluded them: winning the New England Small College Athletic Conference title. That drought ended on November 5 at Bello Field, as the Jumbos scored dramatically in the 88th minute of the game to beat the Middlebury Panthers 1-0, and take the title.

While the first half was evenly contested, the second half belonged to the Jumbos (15-1-2), who outshot the Panthers 14-4. With the clock winding down, Zach Lane, E20, was racing down the right side of the field just outside of the Middlebury box. He sent a low cross across the face of the net and found a charging Brett Rojas, A20, right in front. Rojas headed it into the bottom left corner for the eventual game-winner for the Jumbos. 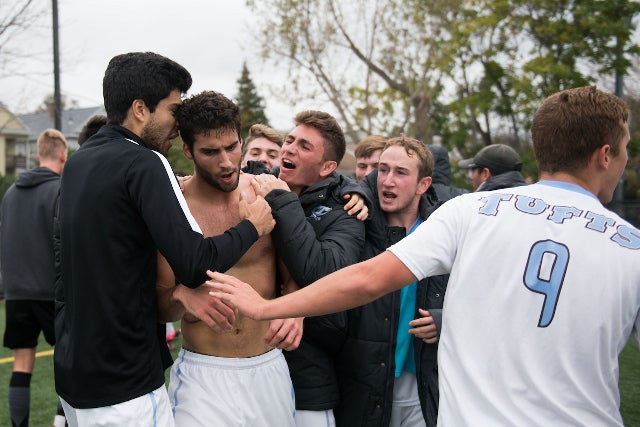 The Jumbos celebrate their first and only goal, scored by Brett Rojas, A20—here reveling minus his jersey. Photo: Nick Pfosi
Tufts had some close shots, none closer than one by Kevin Halliday, E18. He had scored Tufts’ first two goals in the 4-0 semifinal win over Hamilton College, and in the second half of the final took a what looked like a sure shot. It was headed for the upper right corner of Middlebury’s goal, but goalkeeper Jeremy Yeager was able to punch it away at a full stretch.

The first half was a lot slower than second. Only six shots in total were taken, with the Panthers having the edge, 4-2. Middlebury owned the first 20 minutes, getting some good pressure on a Jumbo defense that has still only allowed one goal all year long. They had three shots before Tufts got their first look on goal 24 minutes in.

Up next for the Jumbos will be the NCAA Division III tournament. Tufts received a first round bye, and will face the winner of first round action between Saint Joseph’s College (Maine) and Mitchell College, who will play at Tufts on November 11.

Brigid Bell, A20, finished with a 12 kills and 11 digs, but it wasn’t enough as the first seeded Tufts volleyball team fell to second seeded Wesleyan in the NESCAC final on November 5 at Cousens Gym.

Bu thanks to their strong performance, the Jumbos received an at-large invitation into the 2017 NCAA Division III championship, their ninth overall and the third in the last four years.

Tufts (22-6) will travel to Johnson & Wales University (JWU) in Providence, Rhode Island for an eight-team NCAA Regional later this week. Dates and game times have not yet been announced. The Jumbos will play the University of Massachusetts-Boston (15-15) in the first round.

Tufts (10-5-3) will travel to The College of New Jersey (TCNJ) in Ewing Township for a four-team NCAA Regional later this week. Dates and game times have not yet been announced. The Jumbos will play Virginia Wesleyan University (14-6-1) in the first round.

Undefeated Host TCNJ (18-0-0) will face Roger Williams (14-7-2) in the other first-round match at the site. The first-round winners will then play in the second round for a berth into the NCAA Sweet 16. The teams are ultimately looking to advance to the NCAA championship semifinals, which will be held in Greensboro, North Carolina, December 1-2.

The Jumbos are enjoying a resurgent season in 2017. Their 6-2-2 regular-season NESCAC finish was their best since 2010. They earned the number four seed in the conference tournament and defeated number five seed Trinity 1-0 to gain their first NESCAC semifinal berth since 2012. The Jumbos then twice came from behind to defeat Hamilton College 3-2 in the semifinals, advancing to the conference championship game for the first time since 2005. Tufts led host and number one seed Williams College 1-0 with 10 minutes remaining in the final, but the Ephs scored to tie it, and then won in overtime 2-1.

For the second year in a row, Alp Rodopman, A19, of the Tufts sailing team placed sixth at the Intercollegiate Sailing Association (ICSA) single-handed national championship on November 4-5 at St. Petersburg Yacht Club on Tampa Bay in Florida.

Rodopman had a strong start to the weekend with a second-place in the opening race. However, he then went through an 11th, 10th, 10th stretch before finishing Saturday’s five races with a sixth. He was seventh after one day of racing. He would move up a spot in Sunday’s seven races, which included a win in the 11th start, to go with a fourth in the final race and a fifth in the ninth start.