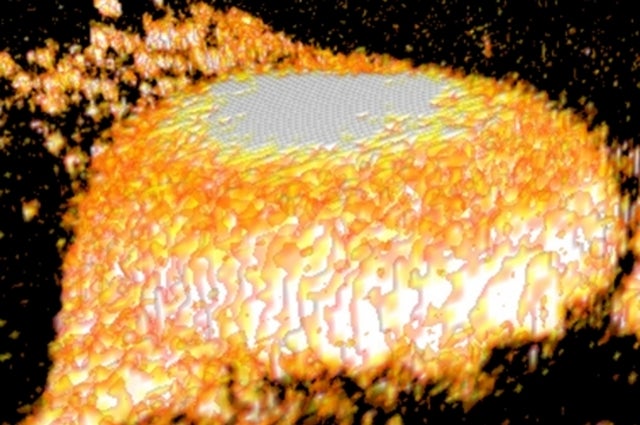 Almost a half million Americans aged 65 to 74 suffer from a degenerative cardiovascular disease caused by calcium being deposited in heart tissue, and many will need valve replacement surgery to prevent heart failure. Currently there is no good way to measure the progression of the disease—called calcific aortic-valve disease, or CAVD—and the exact mechanism by which the disease progresses isn’t well understood.

Now researchers at Tufts have developed a way to image the early stages of the disease, allowing them to track how the calcium is deposited and grows in the aortic valve tissue in much greater detail than before. The end result, they said, could be better understanding of CAVD and other diseases, such as breast cancer, and the development of more effective treatments. The research was a collaborative effort between the labs of professors Lauren D. Black III and Irene Georgakoudi, both in the Department of Biomedical Engineering, and was published on November 6 in Nature Biomedical Engineering.

Called two-photon excited fluorescence imaging, or TPEF, the imaging technology uses near-infrared light to create the images, and, unlike some methods, does not destroy the tissue in the process.

“Our results indicate that TPEF imaging may provide a new tool to non-destructively quantify mineralization [of the heart valve] with high sensitivity and spatial resolution during CAVD progression,” the researchers wrote.

In CAVD, which primarily affects older people and some younger patients who have a genetic defect, “the soft valve tissue stiffens to the point of hindering normal opening and closing of the valve,” said Lauren Baugh, a doctoral student in Black’s lab and first author of the paper. In some cases, Baugh added, “the valve tissue develops bone-like nodules, further impeding blood flow.”

As the researchers started using TPEF imaging, they discovered that by focusing on one particular part of the signal generated, they were able to isolate the calcification process, and could track development of the bone-like nodules. “We saw that calcification occurs with varying rates and degrees, sometimes disappearing in spots even as the overall calcification increases,” said Baugh.

For their testing, the researchers used samples from human CAVD patients, animal bone fragments, and calcified nodules that were grown in the lab.

TPEF provides much higher resolution than current imaging technologies used in diagnosing CAVD, such as traditional computer tomography (CT) scans, ultrasound, and magnetic resonance imaging. It “bears great promise as a tool that may be used to detect and dynamically monitor the development of mineralized deposits from a very early stage,” the researchers wrote.

“We believe that this technique currently has a wide range of applications in studying the calcifications in diseased states as well as in the visualization of healthy mineralization such as in bone and tooth tissue engineering,” said Georgakoudi. “As optical probe technology improves, this system could be used in people to aid with CAVD diagnosis, in determining the stability of atherosclerotic plaques, or in determining breast cancer prognosis, by providing high resolution images, within the context of the natural tissue environment.”