A Tufts researcher is quantifying Medicaid participation rates among low-income seniors, and the policy implications could be huge 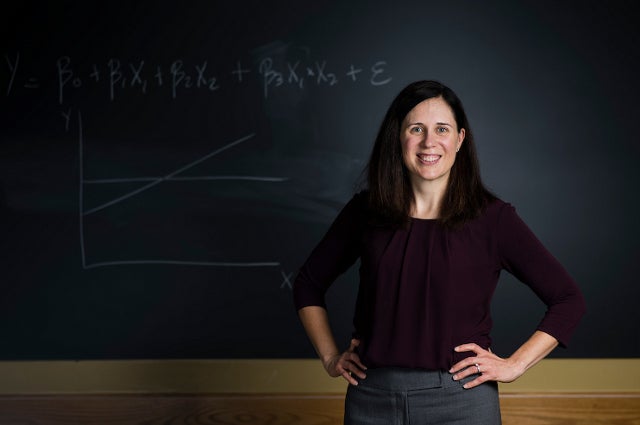 Medicare and Medicaid—the federal programs that provide health coverage for more than 100 million Americans—cost $1 trillion annually. That number could, in fact, end up being much higher, because not everyone eligible for the benefits currently participates.

Now Melissa McInerney, an associate professor of economics in the School of Arts and Sciences, is leading on a study focusing on what drives participation in Medicaid among low-income seniors. She and two colleagues have received a grant of almost $1 million from the federal Agency for Healthcare Research and Quality for the four-year research project.

Medicare provides health insurance coverage for those 65 and older, but isn’t comprehensive—it comes with cost-sharing, co-insurance, and co-pays. For seniors with limited income and assets, though, Medicaid covers most of those extra costs—if they sign up.

To better understand participation in these programs, McInerney and her colleagues from the College of William and Mary and the University of Pittsburgh are first trying to quantify how many seniors who qualify for Medicaid, based on their income and assets, are in fact participating.

Most estimates of Medicaid participation among seniors are over a decade old; they indicate that only about half of seniors who qualify for Medicaid participate in the program. To come up with a current estimate of the number of low-income seniors participating in Medicaid, the researchers are compiling a database of state eligibility criteria and analyzing large sets of data from national surveys. It’s not an easy job: each state determines its own Medicaid eligibility requirements, which vary across states.

They are also seeking to find out what triggers low-income seniors to apply for Medicaid. “It’s important to understand what drives participation in Medicaid,” McInerney said. “We have an aging baby boomer demographic, who are putting increasing strains on the program, and are going to be in increasingly more financially fragile positions.”

One conjecture is based on what happened in 2014, when the Affordable Care Act expanded Medicaid to low-income adults under the age of 65. It turned out that the publicity around that change triggered people not in that intended group to apply for benefits as well, McInerney noted.

This had led the team to theorize that when Medicaid expansions happen—for example, making eligibility more widely available for groups such as children and the disabled—low-income seniors take notice, and realize they are eligible, too. Other ways that low-income seniors might learn about their eligibility are from being told by their doctors or by staff at hospitals they visit.

The researchers won’t have to speculate for long. With the data sets they are using, the researchers can track Medicaid participants’ actions over several years, and will be able to see what event triggered an application for Medicaid. That’s important to know, so policymakers can take into account how expanding Medicaid to one group might affect participation by another group—in this case, low-income seniors, McInerney said.

She also noted that with the recent efforts to repeal and replace the Affordable Care Act, there have also been “huge proposed changes to Medicaid,” she said. “That’s why it’s important to understand how the existing programs are working.”