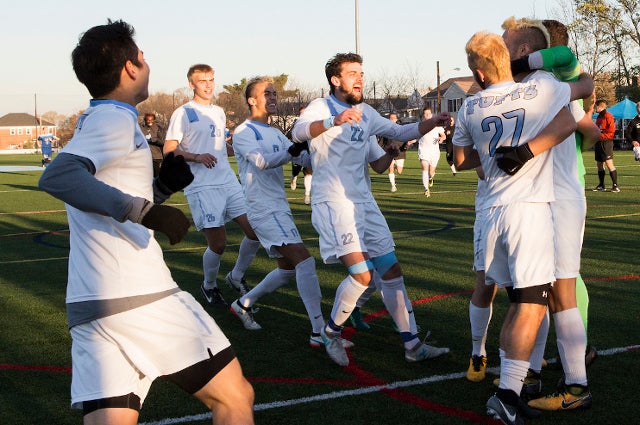 The Tufts men’s soccer team advanced to the Sweet 16 round of the NCAA tournament after defeating St. Jospeh’s (Maine) in penalty kicks, 4-2, on November 12 at Bello Field. The Jumbos will host John Hopkins University (16-1-3) this coming Saturday, November 18.

Zach Lane and Conor Coleman drilled the Jumbos’ first two shots into the back of the net, while Connor Mieth made two saves on attempts by St. Joseph’s Brett Mattos and Rory Twomey. On Tufts’ next shot by Matt Zinner, Monk goalie Blake Mullen, who had been spectacular all game (10 saves), came up with another big stop diving to his left. That gave St. Joseph’s a little momentum as they were able to convert on their next two attempts by Noah Robinson and Mitchell Cyr. Travis Van Brewer also converted for Tufts to give them a 3-2 lead with two kicks remaining per team.

Dexter Eichhorst stepped up for the Jumbos. A goal would win the game, while a miss would give the Monks a chance to tie it up. On the shot, Mullen guessed to the left and Eichhorst hit it softly into the right side of the net for the win. The rest of the Jumbos stormed towards him in celebration as the crowd roared.

“I’ve never experienced anything like that,” Mieth said in reference to the penalty kicks. “I kind of let my ‘psycho’ slip out a bit. I usually keep that tucked in my back pocket, but it was good for me today.”

It almost didn’t come to penalty kicks, as there were a handful of good chances throughout the entire game, especially for Tufts.

The first half started out evenly, with both teams controlling the ball for long periods. About half way through the Jumbos started to commit a couple extra players forward to create more pressure on the Monks’ defense, and it worked. They outshot St. Joseph’s 7-2 in the first half.

The second half almost completely belonged to the Jumbos. Gavin Tasker almost won it for them on two separate occasions. In the 68th minute, he cut into the box from the left side as he received a cross from the right. He sent it spinning towards the top left corner, but Mullen was able to get a single hand on it to punch it away.

Then in the 73rd minute, Tasker had another shot on goal from just a few yards out that Mullen was able to trap between his hand and the ground just before it crossed the line.

In overtime both teams almost scored. The Monks’ Quinn Hewitt sent a shot screaming for the top right corner of the net in the 92nd minute, but Mieth was able to get a hand on it at full stretch to tip it just above the crossbar. Almost immediately on the other end, Sterling Weatherbie took a shot that was destined to find the net if it wasn't for another great save by Mullen.

“I’m very proud of our guys’ resiliency,” Tufts head coach Josh Shapiro said. “You’ve got to find a way to survive and advance and we survived and advanced. We’re excited to keep playing and we're not done yet.”

This marks the second straight year that Tufts will host an NCAA sectional at Bello Field. Last season, they advanced past UMass.-Boston and Kenyon to reach the Final Four. The Jumbos eventually won the national championship for the second time in three years.

Live webcasts of all three games at Tufts this weekend will be available at http://www.jumbocast.com/.