A World of Threats 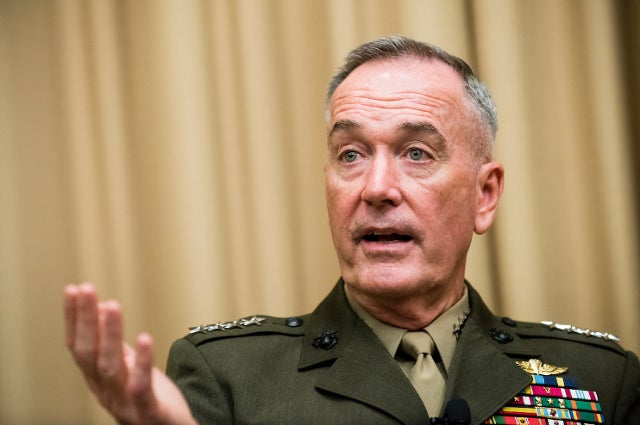 General Joseph F. Dunford Jr., F92, is confident that the United States can defend against the current threat posed by North Korea, but the thought of cyberattacks keeps him up at night, he told a standing-room-only crowd at the Fletcher School on November 14.

As chairman of the Joint Chiefs of Staff, Dunford is the nation’s highest-ranking military officer and the principal military advisor to the president, the secretary of defense, and the National Security Council.

In a wide-ranging conversation, Dunford touched on multiple security challenges facing the nation, including the threats posed by Russia, China, Iran, North Korea, and violent extremism. Seated in an armchair in the front of ASEAN Auditorium, he spoke for half an hour with his former teacher, Richard Shultz, professor of international politics at Fletcher, then took questions from the audience for more than an hour.

U.S. alliances with South Korea and Japan, as well as the American military posture in the South Pacific, have largely deterred attacks from North Korea, Dunford said, even though they have failed to stop that nation’s development and testing of intercontinental ballistic missiles and nuclear weapons.

Still, there is “room for optimism” that economic and diplomatic pressure may cause North Korea to denuclearize peacefully, he said. “China can actually be part of the solution—and that’s what we’re cautiously optimistic they will be,” he said.

If North Korea were to attack South Korea, Dunford promised a swift U.S. military response. “We will do what must be done to protect South Korea,” he said. “I’m very confident we can defend [it] … from a limited missile attack.”

When asked if the United States might hesitate to defend South Korea if North Korea posed an imminent nuclear threat to Americans in the continental United States, Dunford said that was a “pure hypothetical” and declined to speculate on it, instead reiterating that the United States can defend again North Korea’s current capabilities.

While expressing confidence in the competitive advantage of the United States in conventional military power, Dunford suggested that this advantage has eroded over the last 10 to 15 years due to lack of sustained investment by Congress—and that it may not extend to areas beyond conventional power. “I don’t take for granted any cyber advantage over Russia or China,” he said. 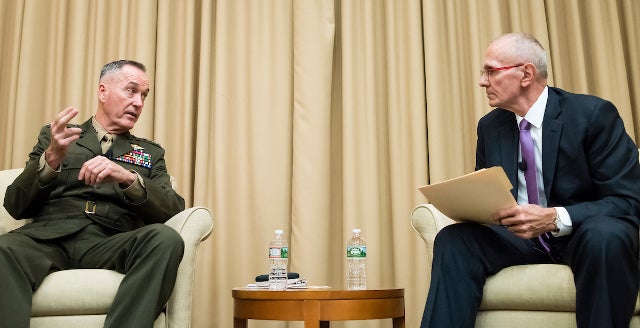 “We can’t go so slowly in cyber,” said Joseph Dunford at the Fletcher School event, here with Professor Richard Shultz. “Cyber defense in particular keeps me awake at night.” Photo: Alonso Nichols
One of the challenges for the United States is that “we are a nation of laws” and our process to approve cyber operations is detailed and lengthy, he said. “Russia and China are not inhibited” by the same regulations, he said, pointing to Russia in particular as a country that is “employing capabilities we associate with war.”

Rather than using popular terms like hybrid warfare or gray zone to refer to Russia’s mix of cyber, political, and information operations, Dunford said he preferred to call it “adversarial competition.”

To respond to such competition and strengthen our cyber capabilities, Dunford said that the military must become more nimble. “We can’t go so slowly in cyber,” he said. “Cyber defense in particular keeps me awake at night.” He also said that in the case of an “attributable cyberattack,” the nation must deploy its full arsenal of military, economic, and diplomatic tools to respond.

Turning his attention to violent extremism, Dunford said that the United States and its partners have “momentum against ISIS” and have undermined the credibility of the militant group’s claim that it would have a physical caliphate, but the problem of violent extremism will still be with us for a long time.

While it is important to share stories of the atrocities committed by such groups, he said “the most credible voice to talk about ISIS is not necessarily the United States.” Instead, he looked forward to hearing more from Muslims who have experienced life under ISIS.

Explaining the recent decision to send more American troops to Afghanistan, after a few years of drawing down the U.S. forces in that country, Dunford said the American troops would be there to provide training and to advise and assist. “We’re not going to fight the fight,” he said. “The Afghans are doing that.” He said the situation would be difficult, but it was better than the expected consequences of “walking away” from a war in which the United States has been involved for 16 years.

Similarly, he said U.S. forces in Niger, in West Africa, are there to help build the capacity of local forces to combat violent extremism in that region. In response to a question about the recent deaths of four U.S. soldiers in Niger, he said the results of an investigation would not be available for a few more months.

Responding to a question about President Trump’s support of torture, Dunford said he wouldn’t comment directly about Trump’s statements. But he pointed out that there had been no change in policy on issues such as treatment of prisoners of war from Obama to Trump. “When the United States goes to war, we go with our values, and I’m proud of that,” he said. “A source of our strength is our moral authority, and we have to maintain that.”

A theme throughout the evening was the need for investment for military readiness, a topic that Dunford takes up regularly in budget conversations with members of Congress. He said part of the challenge is that troops are deployed so frequently they don’t have enough time for training. “I own a piece of this,” he said. “We need to step back and [evaluate] what we’ve been asking the force to do.”

Dunford also spoke of the diplomacy needed in his own role, pointing out that while he is legally obligated to provide advice to the president and other leaders, none of them are legally obligated to listen. Building trust and being perceived as apolitical and without a personal agenda is essential to his success, he said.

Pointing out that he assumed his current role two years ago, under Obama, and was renominated by Trump and confirmed to a second term this fall, he said with pride, “I was never viewed as a Democratic general or a Republican general.”