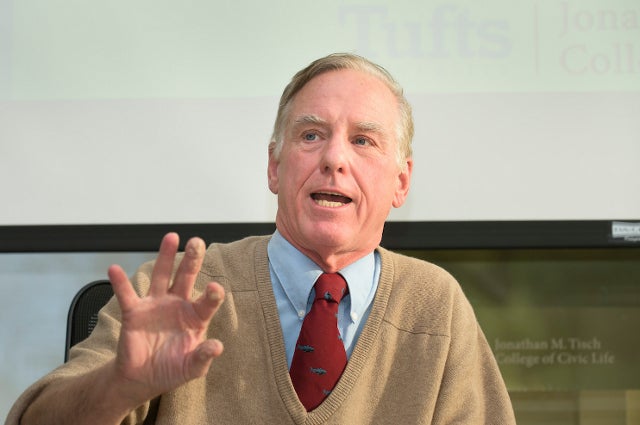 But it’s time for his generation to step back from party leadership roles, Dean told several dozen Tufts students over pastries in the sunlit Rabb Room during Tisch College’s “Donuts with Dean” event November 29. “I want to support someone under 50—I’d settle for under 55—to run for president,” said Dean, who had rolled up his sweater sleeves and spoke between bites. “It’s time my generation got out of the way.”

Young activists have the power to make change, he said. They helped force vice president and former Indiana governor Mike Pence to amend his anti-LGBT “religious freedom” law to protect gays and lesbians, Dean noted during the discussion, which was moderated by Deborah Schildkraut, professor and chair of political science. Likewise, their efforts forced Bank of America to reverse a decision to charge customers $5 for owning a debit card.

“You are the most empowered people who have ever existed in human history,” Dean said, pointing to youth-driven organizations such as Indivisible, Run For Something, Color of Change, Voto Latino, and Swing Left, which was founded by Tufts alum Ethan Todras-Whitehill, A02. “You can go online,” he said.

To sustain and direct that power, however, young people need to get their act together, Dean said. “Your generation is characterized by cooperation without commitment. You work together, but only until the two entrepreneurs at the top of the organization diverge,” he said.

It’s also time to get over disdain for institutions, he said. “We don’t care if you’re Democrats. We want you to continue our shared values,” Dean said. “Start your own institution, but it has to be a real institution. You can’t continue to be ad-hoc.”

Dean’s tough love wasn’t confined to millennials, as he weighed in on a range of issues. “Washington is like middle school on steroids,” he said, prompting laughter. “They see stuff through a filter no one else sees. Who sits next to who at a dinner party, who got on cable TV, who got in the Washington Post—yuck.” He compared politicians to physicians: with few exceptions, they’re trained to be arrogant. “There’s only one other position in the world where you can meet someone and five minutes later they have no clothes on,” he said.

To a student’s question about the Democratic Party split between presidential candidates Hillary Clinton and Bernie Sanders, he responded, “I’m tired of people talking about the schism. Enough whining and complaining.” Dean is close to Clinton, but thought Sanders brought enormous benefit to the party, he said. “We’ve got to stop talking about the party in terms of personalities, and talk about the facts and what we want to achieve,” Dean said.

Dean talked about the need to be open-minded as a politician. He told of when, as governor, his chief of staff made him take a meeting he initially balked at, with the head of the Christian Coalition, who it turned out supported Dean’s veto on expanding the lottery in Vermont. “You’ve got to have someone who thinks you don’t walk on water. I’m lucky to have a chief of staff and a wife like that, who frequently told me how stupid I was,” Dean joked.

On a more serious note, Dean recounted a second takeaway from that encounter. “I said, ‘You fool. Next time, you won’t judge people before they come and talk to you. You ought to listen to them first,’” he said. “It was an incredibly valuable lesson, one most politicians have trouble with. I was fortunate to learn this lesson.”

He learned another hard lesson when he signed the nation’s first civil unions legislation into law, a decision for which he was criticized during his 2004 presidential campaign. People initially urged him to form a commission to study the issue, delaying action until after the election, but Dean recalled President Lyndon Johnson’s words to Martin Luther King, Jr. on passing the Civil Rights Act. “How would you feel if I said you couldn’t have rights for 16 months because it inconvenienced my election?” Dean said. “So I said bullshit to that.”

Although Dean had to wear a bulletproof vest the summer after signing the bill, he said it was the most important thing he did as governor, and it has given him a different perspective on current events. “Political courage at the end of the day means you have to be willing to give up your political career to do the right thing,” Dean said. “The tax bill in front of Congress would never go anywhere if there were an ounce of backbone in the Republican Party,” Dean said. “There’s less courage in politics today than I’ve ever seen in my lifetime.”

Dean urged students to be brave and step up to fill that void, promising that his generation will be there to help and coach them along the way. He underlined that message in an interview before the event. “I think the younger generation has an incredible opportunity,” Dean said. “We’ve got to get rid of us; we’ve served our purpose. It’s time for the younger generation to take over the world.”