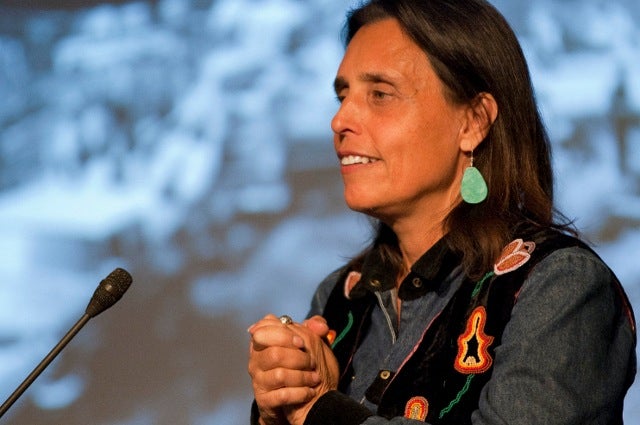 Winona LaDuke, an environmentalist, political activist, author, and farmer, wants to “make American great again.” Her idea of when America was great? “When there were 8,000 varieties of corn,” she said.

LaDuke, a member of the Anishinaabe nation, is a long-time advocate for native economic and environmental development. She twice ran for vice president on the Green Party ticket with Ralph Nader. In recent years, she has spent most of her time fighting oil pipeline proposals in Minnesota.

But at this conference, she spoke as a farmer and food advocate. “You are the people who are going to feed us all,” LaDuke told the crowd. And that, she said, will only happen if we stop pillaging our natural resources, turn away from fossil fuels, and commit to preserving variety in the crops we grow.

“Great,” she said, “is when you have tremendous agrobiodiversity and diversity of all kinds.”

She praised the benefits of being connected to the source of our food, and having respect for it. LaDuke lives on the White Earth Indian Reservation in Minnesota, where she plows her fields using ponies and horses—although she acknowledges other technologies have their place—and uses fish guts as fertilizer. In her community, wild rice, which has grown on the lakes there for 10,000 years, is still harvested by hand. To the Anishinaabe, wild rice is a sacred food, just as taro is to the people of Hawaii, she said.

In the Hawaiians’ creation story, the first child born of the earth and the sky was kalo, or taro. The second was man. “In the Hawaiian people’s understanding of the world, kalo is their older brother,” she said.

She pointed to heritage varieties of potatoes, squash, and many other crops that have more vitamins and nutrients than the versions found in grocery stores. “It seems like the more industrialized food has lost some of the cool stuff,” she said. “Food is medicine and food is magic, so let us treat it as such.”

Diversity also protects against risk. One type of corn she grows on her farm is more resistant to frost and drought than more common varieties, an excellent option to have in an age of climate change.

Her hope is that the paradigm of how we view food will shift. The good thing about planting every spring, she said, is that it presents another opportunity to start over. “One seed represents so much hope to me,” she said.