Tufts researchers build a 3D model with small intestine stem cells to test the progression of intestinal diseases, including cancer 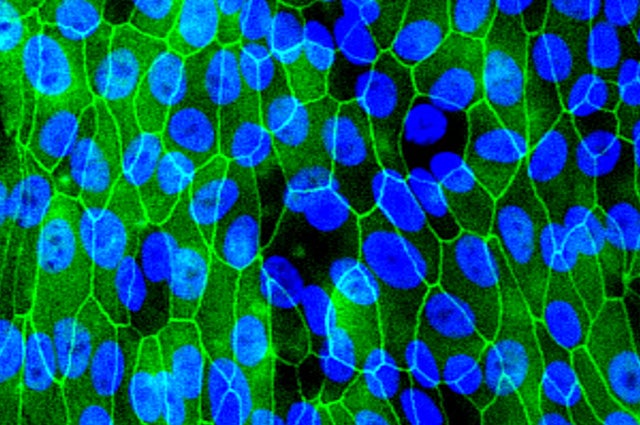 Many diseases affect the human small intestine system—from bacterial, viral and parasitic infections to cancer—but scientists trying to study how those diseases progress have been stymied by the limitations of animal and laboratory models, which often don’t correlate with human responses to disease.

Existing laboratory models of the human intestine rely on commercially available single cell types that do not replicate the complicated intestinal system. Instead, the Tufts researchers—David Kaplan, the Stern Family Professor of Engineering and chair of the Department of Biomedical Engineering; Ying Chen, a research associate in his lab; and their colleagues—used intestinal stem cells from people who donated the tissue for research. These cells, provided by Mary Estes of the Baylor College of Medicine, “can self-renew, expand indefinitely, and differentiate into all cell types of the intestinal epithelium,” the report said.

The researchers used a tubular sponge-like structure made of silk protein as a scaffold for the cells. The material is biocompatible—meaning it doesn’t affect or harm living tissue—is safe to use, and maintains the intestine-like structure for months.

The goal of the work “was to bridge the gap between conventional cell culture studies and human trials, to achieve a greater understanding of intestinal biology and infectious disease mechanisms, and to serve as a preclinical screen tool for pharmacological targets,” the researchers wrote in the paper, published in the journal PLOS.

What they found was that the epithelial tissues formed in the 3D scaffolding had the same types of stem cells found in human intestines, behaved in the same complicated ways that human tissue does, and showed significant anti-bacterial response, specifically to infections of E. coli bacteria that the researchers introduced. That response “was due to the human cells used to generate the tissue—the genes are expressed by these cells in response to bacteria,” Kaplan said.

The model’s vigorous response to bacterial infection might also make it useful for studying irritable bowel disease, which involves chronic swelling of the intestines, Kaplan said. Researchers will also use the model to study intestinal cancers and for drug discovery related to the treatment of intestinal diseases, he added.

Kaplan, Chen, and their colleagues have also been collaborating with Tufts School of Medicine faculty, led by Professor Ralph Isberg and including professors Honorine Ward, Carol A. Kumamoto, Joan Mecsas using the 3D tissue model. “That work centers around using the intestinal tissue model as a host system to infect and then study disease progression,” said Kaplan. They have been studying intestinal infectious diseases caused by protozoa and bacteria such as Cryptosporidium and Clostridium difficile in an effort “to gain new insight into lifecycles and mechanisms of infection in order to identify ways to prevent or treat global diseases,” said Kaplan.