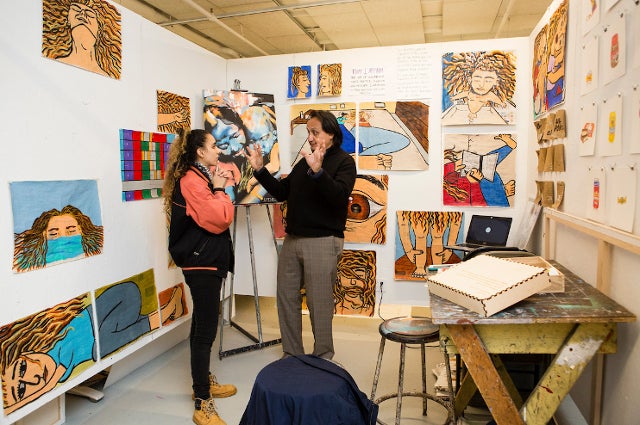 Becoming an artist can be a solitary pursuit, but for students in the School of the Museum of Fine Arts at Tufts, it’s also important to engage with other people and talk about their ideas and their work. That’s the idea behind the school’s annual Open Studio Day, for students in the Senior Thesis Program.

This year’s event, on December 7, gave twenty students working at dedicated studio space at the school’s Mission Hill studios a chance to showcase their works-in-progress, and to talk with Tufts visitors about their creative ideas and how they unfold in media ranging from handmade paper and painting to drawing and video.

The students are all working toward their final senior thesis exhibition in the spring. They meet throughout the year with Senior Thesis Program faculty Andy Graydon and Kendall Reiss, as well as postgrad teaching fellow Isabel Beavers, SMFA15, and research librarian Ashley Peterson, “as they will integrate research on their artistic practice with their work in the studio,” said Reiss.

Students selected for the thesis program are typically young artists “who are beginning to open up their artistic practices and explore concepts across media and disciplines,” Reiss says. “At this point in their academic trajectory, it’s important that they have their own studio space that they can inhabit for a year of focused work.”

Open Studios amplifies that experience by giving the students a chance to engage with people around their artistic process. “Open Studios invites feedback from members of the Tufts community, and most importantly, from people the students would not normally meet,” said Reiss. “A visitor from the psychology department is probably going to bring a new way of looking, or suggest something the artist might not have thought of yet. When people see your work differently from you, that means you gain a different, wider perspective, and that is a really valuable opportunity for any young artist.”

Mabel Albert: A Call to Action 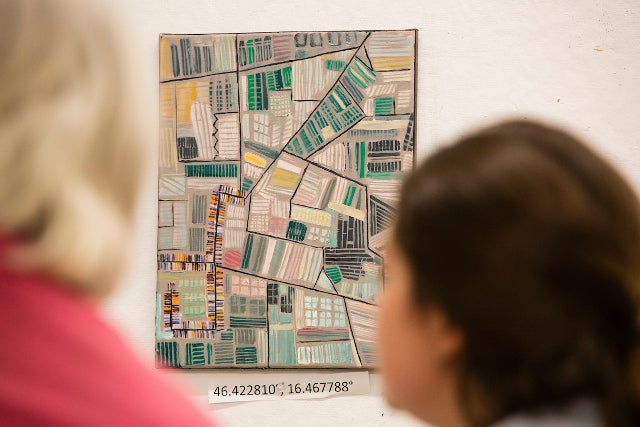 Mabel Albert shows a visitor one of her art works. Photo: Anna Miller
Working from aerial photographs of landscapes transformed by exploitation for natural resources, Mabel Albert creates paintings that she hopes will be a “conversation between us and the Earth.” She takes the tradition of painting and pushes it into a frame at once urgent and deeply troubling, focusing on a “chemicalized America,” where, through industry, “humanity has caused a footprint of destruction.” Vividly recaptured in paint are Searles Lake in California, a potassium evaporation site; a Croatian cornfield—the product is corn oil; a field of canola flowers in China; and the first-ever oil rig in Russia surrounded by a broken jigsaw puzzle of ice, places that “have been crushed by the footprint of humanity.” She paints on wood and canvas, and has begun to use mirrors as reflective devices that she hopes makes viewers think about the fragile co-existence between humans and the Earth. Can her art move others to action? She hopes it will. “My work reflects feelings,” she said in her artist statement. “I want you to become insightful, nostalgic. Think to yourself, what am I doing? Enough?” 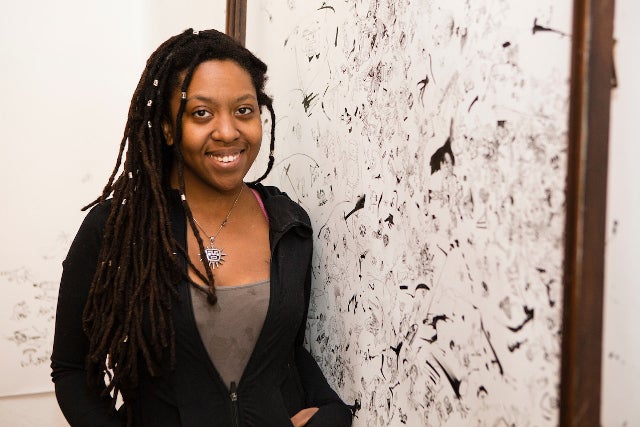 Tatia Cynae dwells in a magical realm she creates by drawing with Micron pens, favored by professional illustrators, watercolorists—and scientists. At the open studio, she was, for the first time, enjoying the unfettered freedom of expressing her ideas on a wall. “It’s stream-of-consciousness,” she said.  “As soon as I draw a character, it’s complete—it’s done.” Her characters, of all various contortions and expressions, “are just letting it all hang out. They are an acceptance of all the humanity that just happens. No judgment.” She finds inspiration in comic books, pop art, low-brow arts, but “I’m also interested in art that doesn’t have a horizon, that just emerges.” Absorbed into her drawings, she says it can be “kind of meditative, for sure. A month might go by before I’ll step back and look at the whole thing, and I always get a laugh out of it. I laugh because some of them are very funny, and I’m like, ‘wow, I drew that!’”  You can see more of her work on Instagram, Cynaestudios, and on Facebook page, Cynae Studios.

Carlie Isley: Where Did He Go? 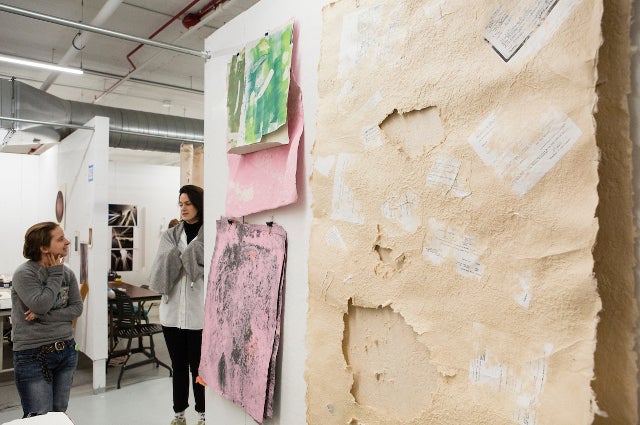 Carlie Isley, left, with a fellow student. Photo: Anna Miller
Carlie Islay works with hand-made paper, and is exploring her family roots by asking: where are you from? “My great grandfather was part Chippewa and went to the Carlisle Indian School in Pennsylvania, and that’s what I’m named after,” she says. She repurposes legal documents from his life—birth certificate, marriage license, letters, maps and deeds—integrating them with a massive swatch of paper she made by hand from cotton-based fibers. She sees the work as “representative of skin” that can also convey the loss of memories and evoke questions about self and destination. “It makes me ask: What does his life mean to me? He moved around a lot and I also moved around a lot, so we have that in common. It makes me ask: Why didn’t he stay in one place? Where did he go?” 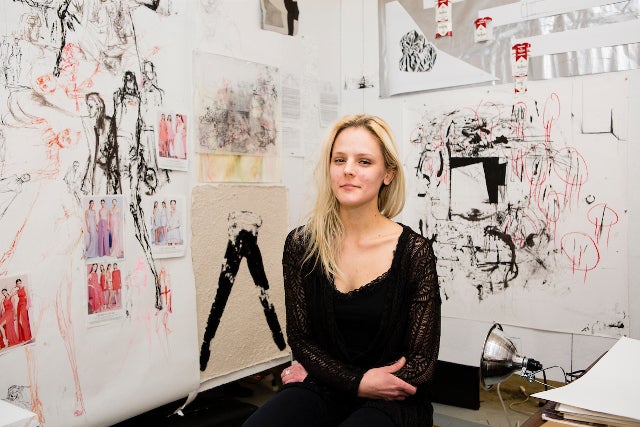 Photo: Anna Miller
Majoring in French and computer science on the Medford/Somerville campus as well as working toward a B.F.A., Nika Korchok parlays a fascination for code into art that bridges technology and drawing. “I think of art and technology as being very connected, just as Leonardo da Vinci dissected bodies to learn how to draw them,” she says. Her source material includes magazine fashion ads, some of which have been banned from circulation “because the models were deemed too thin by censorship groups in the media industry,” she says. Her sketches of angular female bodies—executed with old makeup products such as mascara and eyeliner pencil—are part of her search for what she calls “algorithmic transparency, the algorithms inherent to the human body and its infinite capacity for posturing and movement.” She is also exploring the concept of censorship, because “decisions about information are incredibly integral to both studies in art and computer science.” As for her own effortless moves between art and technology?  “I’m very much right-brain, left-brain. My studies in computer science, and specifically in algorithms, allow me to define structure, and systems of organization and control in my own artistic work. Bernard Chazelle, a renowned computational geometer, and his work in the study of natural algorithms, is one influence on how I make these interdisciplinary connections.” 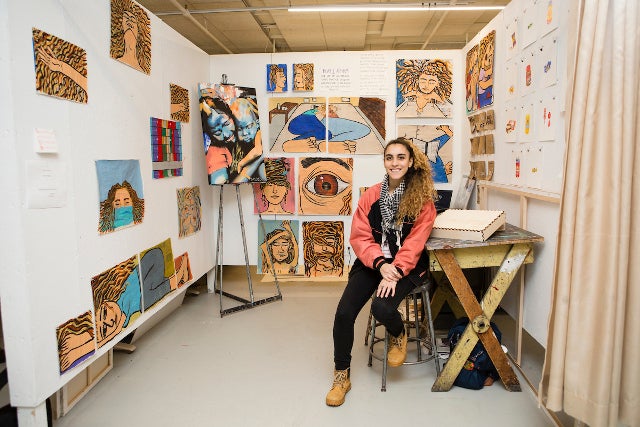 Photo: Anna Miller
Sara Pizarro, a Colombian artist who explores the social and cultural imagery of Latin American culture, usually paints murals on traditional canvases. For her senior thesis, though, she is painting on newspaper to deepen her sense of self by experimenting with the creative process. Her goal is “to know myself better and how to express myself without worrying about the outcome,” she says. “The newspaper helps, because it’s a material that you don’t really care about making mistakes on. So it was easy for me to start expressing myself—it’s been liberating. I also have been reading Big Magic by Elizabeth Gilbert. It’s helped me understand that the creative process is less about the outcome and more about falling in love with your work. As an artist, you’re always searching for what’s next, or what’s better. You’re never satisfied. But I’m trying to find that in myself.” You can see more of her work on Instagram and Facebook as Pizarrografia.