A Professor Turns to the Dark Side

Frank Lehman finds complexity, character clues, and the definitive sound of evil in the music of "Star Wars" 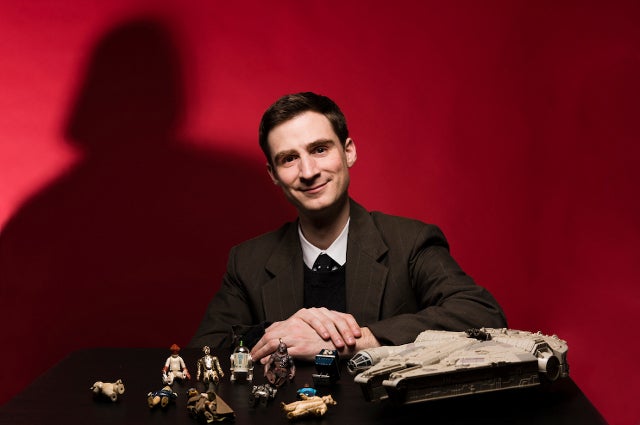 For a sci-fi fan, is anything more thrilling than a darkened theater, the flash of the yellow Stars Wars logo, and the first rousing notes of John Williams’ score ringing out? The 85-year-old composer, who wrote the music for eight of the nine films in the space saga and is working on Episode IX, is as integral to the success of the Star Wars franchise as the Force itself. And that’s not just fangirl talk—even serious music critics such as Alex Ross of the New Yorker have recognized that the films’ music is “superbly crafted and rewards close analysis.”

Frank Lehman, an assistant professor of music at Tufts who, among other things, studies film music and the way it shapes a moviegoer’s experience, has analyzed Williams’ music more systematically than most, and recently updated his “Complete Catalogue of the Motivic Material in ‘Star Wars,’ Episodes I-VIII,” to include The Last Jedi, which premiered in December.

He documents 55 leitmotifs—bits of melody repeated in the scores that act as themes, evoking particular characters, places, or relationships. Luke, Obi Wan, and the Millennium Falcon have their own themes. Kylo Ren has three leitmotifs to call his own, which Lehman names “aggressive,” “hesitant,” and “menacing,” reflecting the conflicted nature of the sequels’ wannabe villain. For the serious student, Lehman also lists less-prominent “incidental” motifs, such as Ominous Upwards Arpeggio, which shows up in The Empire Strikes Back, roundabout when Luke loses his hand.

Lehman has written an essay about these and other themes, which will appear in the upcoming book, John Williams: Music for Films, Television, and the Concert Stage, to be published by Brepols.

Tufts Now talked with Lehman about Williams and Star Wars, what the scores reveal about the characters, and the pitfalls of using musicology to predict plot.

Tufts Now: Why is John Williams’ movie music so effective?

Frank Lehman: He focuses a lot of his energy on creating memorable melodies and themes, going through a lot of different combinations until has exactly the right sort of phrase structure and melodic contour so that it really becomes an earworm, something that lodges in your brain and doesn’t let up.

That’s not common anymore, though. Film compositions over the past ten to twenty years have moved away from very memorable themes in favor of more ambient and more mood-setting music.

His music helps make the movies memorable, and the ubiquity of some of these franchises he has worked on helps elevate his music. The scores are custom-tailored to evoke nostalgia and fond memories. In the case of Star Wars, they are also repeated over the course of 40 years of filmmaking. I don’t know of any creative endeavor in mainstream filmmaking where there has this been this consistent through-line of music by a single person. It is an unprecedented opportunity to develop themes, to invent new things, or to bring back things that were only briefly heard twenty-five years ago.

Many of the musical themes in Star Wars are associated with characters. Is that typical in film scores?

This leitmotif technique goes back to the nineteenth century and to Richard Wagner’s operas in particular. He had themes for characters, events, objects, ideas, and more abstract things. Character themes were also a large part of the Golden Age of Hollywood, as well. In Star Wars, character is important—perhaps more than narrative coherency. There are very striking archetypal characters, and Williams writes striking archetypal themes for them.

I guess we need to acknowledge the prequels. Everyone agrees the prequels are horrible as movies. But musically?

At least the music is very rewarding to study. There is a lot of wonderful material there. It seems as though Williams was aware of some of the quality issues in the prequel trilogy, and set it upon himself to compensate with very stirring music that perhaps in some places attempts to evoke emotions that the dialogue and the writing simply are failing to do. The music on its own is very operatic, and tells this impressive story of a tragic downfall as Anakin becomes Darth Vader. Even so, it’s hard to extricate the music from the flaws of the movies. As film composer Ennio Morricone has said, a good film can survive a bad score, but a good score ultimately can’t salvage a bad film.

Which Star Wars themes most interest you?

The most iconic theme when you get beyond the main title theme is the Imperial March/Darth Vader theme. It’s extremely aggressive and powerful sounding. It has this characteristic progression between G minor and E flat minor and various transpositions of that—with qualities of evil, power, magic, and mystery that can be traced back to Wagner’s Das Rheingold.

Why is that progression so ominous?

It’s an example of a chromatic progression. Most music that people listen to is generally constrained to what’s called the diatonic scale—what you would think of as the normal major or minor succession of pitches. The diatonic scale is perfectly capable of suggesting any kind of emotion. But when you start adding notes that are outside that seven-pitch scale, you get a lot more capability for suggesting the strange, the other, or the marked. Another example of the Vader progression can be found in Gollum’s theme from the Lord of the Rings series by Howard Shore.

What interested you about the music in the latest film?

I was really struck by the smaller, more obscure musical references—they are more like Easter eggs than integral parts of the score. There is one musical joke during a visual gag where what looks like an ominous spacecraft turns be just an iron being used to iron a First Order uniform; there is a reference to the Death Star motif from the first movie. That just shows how esoteric these things can get. I missed it on the first two hearings and only learned about it on a music message board.

You also noticed that there is a brother-and-sister theme that we haven’t heard since Return of the Jedi.

When Return of the Jedi came out in 1983, the Luke and Leia theme was the major new thematic centerpiece of the score. Williams clearly invested a lot of time and energy into composing this really exquisite theme with clever nods to Luke and Leia’s individual themes. But it was used super sparingly—just two renditions, neither of them given time to breathe. We hadn’t heard it since then, until The Last Jedi, when it is used in the very affecting and beautifully scored moment when Luke and Leia meet on the salt planet. I felt extremely gratified to hear the theme then. And it’s like saying goodbye, in a way, because I doubt we’ll have another opportunity to hear it.

What do you think of the theme of Rey, the heroine of the new trilogy?

It is the big centerpiece of The Force Awakens and continues to be heard pretty often in The Last Jedi. It’s very interesting musically on a structural basis. But for me what’s most telling is the way it has been received by people who interpret film music. Her character was set up as having a mysterious heritage—is she the daughter of someone important? And people have located in her melody allusions to the Star Wars main theme, to Darth Vader’s theme, the Force theme, the emperor’s leitmotif, Kylo Ren’s theme—that’s just the beginning. If you wanted to connect it to the Ewok March or Jabba the Hut or Jar Jar, I’m sure there is a way. I really find it interesting that this has been the tactic that so many have taken in predicting what will happen with her character on a narrative level. Leitmotivic analysis is not divination.